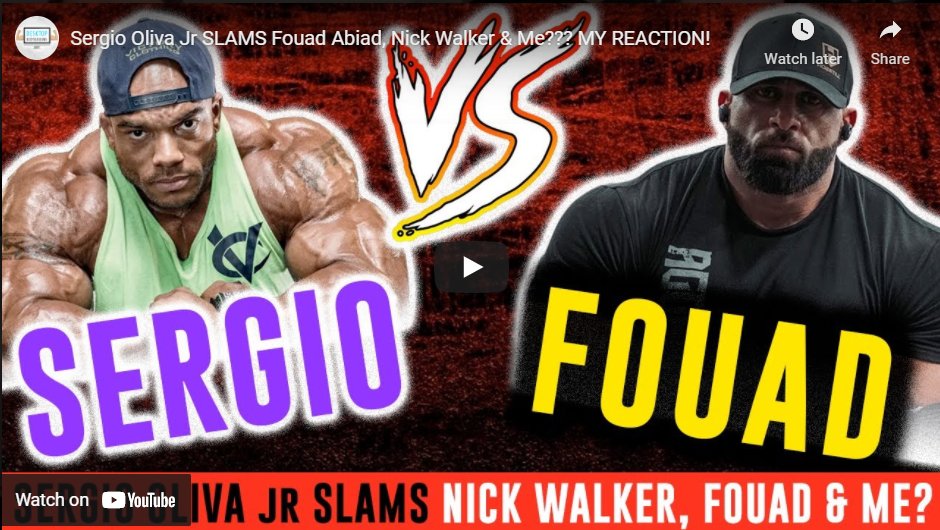 Guys, let me point something out that you should all take to heart. If you’re involved in the fitness industry and you’re in the habit of confiding in people, proceed with caution. I’m not saying you can’t trust anyone, but you have to be a really solid judge of character if you’re going to talk about your personal life, business dealings, or anything that you wouldn’t want the world to know. When the news hit that IFBB Pro Sergio Oliva Jr was not doing the Chicago Pro, the news spread like wildfire.

Everyone was talking about it, but the only person who hadn’t made any kind of announcement was Sergio. That should have been an automatic red flag to media outlets, but it was not. Sergio released a very carefully-worded video, but at the same time very emotional video, where he took friends and outlets to task. Oliva made a number of excellent points, including the fact that the decision of his friends to make his business public, has caused him to lose money, put him in an awkward spot with promoter Tim Gardner, and it’s the absolute last way he wanted his loyal fans to know why he can’t do Chicago. The bottom line is, no one took “the 30 seconds to text Sergio ” because that’s not what this industry is all about. Everyone is an “influencer,” everyone wants to have a “media outlet,” and everyone thinks they’re a journalist. It’s a world where everyone races to publish because everyone wants to be the “leader” in news. Fact-checking and principles take a back seat to hits. It is what it is. And furthermore, when the sport gets really boring, that’s when media outlets rely on clickbait. I can certainly empathize with Sergio’s video, but I’m surprised at how naive he was and I want to take this opportunity to speak to the greater issue of trust.

One concept that a lot of people need to look beyond, is prefacing a statement with stating it’s “off the record.” You may think that by saying that and receiving any kind of acknowledgement from the listener, that that somehow translates to them accepting the terms, but it means nothing. You can tell people something is “off the record” till the cows come home, but they’ll out you in a heartbeat if it means them gaining popularity. Now, sure, if you’re confiding in a single person, that may not be quite as big of a blunder, but when we see competitors going off the record with media personalities – that’s insanity. If you’re talking to someone who’s known for reporting the news and they drop a media bombshell that’s “off the record,” don’t be shocked if the second that conversation ends, you don’t read about it all over the internet. And what’s worse, the person who burned you, might deny it up and down. They might also just apologize. Apologies are easy to make, especially if they don’t mean anything. A lot of people will burn you over and over and over again, each time apologizing for it. If you confide in someone like that and you get burned, then you have only yourself to blame.

Sergio’s video didn’t just put certain people on blast. It didn’t just speak to the fact he was done wrong, but his anger is undeniable. The video itself will now get chopped up and put out by a variety of outlets preying on social media for content. Rivalries are what keep many of these websites in business in between contests and Sergio just fed them for months. In fact, I didn’t actually see Sergio’s video on his platforms, I watched a channel I like, which totally dissected it, with commentary for each 10-15 seconds worth of it. No disrespect to the outlet I saw it on; afterall, if they didn’t share it, I probably would never have seen it.

The truth is, I don’t have the time or interest to watch each competitor’s social media feed. While I do have a weekly program, write 10 articles a month for Iron Magazine, and also maintain various social media platforms, I have never fanboyed athletes’ pages. That being said, i do watch all the outlets that basically do it for me. That’s why I subscribe and if a story really calls out to me, then I may pen an article and do my own research. This topic is important to me because I see so many people get burned – from level 1 amateurs all the way to world class professional superstars.

With regards to the subject at present, there’s more to it than what’s been written. There was a pretty lively exchange between Sergio and the person he accuses of burning him. I’d say the person’s name, but then I could be accused of looking for hits and I’m not. I have nothing against that person, only that I used to tag him on some posts on IG and I guess he didn’t like that so I simply stopped tagging him. Initially, the exchange appeared to be that of a person who was sincerely apologetic, but the more the texts went, it suddenly became clear that everything I’ve written in this article was the impetus for breaking the story. These guys are industry friends, but that’s about it. They’re not really friends, at least not from what I saw. The guy who Sergio feels burned him, may have done so, but he points out that Sergio never took an interest in his life, what he was going through health-wise, or times he may have stopped competing. That may or may not be true. The guy also stated he’s not a news outlet, he’s just a guy who likes podcasting. Well, that’s also up for debate.

If it looks like a duck, quacks like a duck, who cares if it says its a duck or not? You may not call yourself a news outlet, but you’re basically doing the same thing Palumbo and his co-hosts do. All I’m saying is, you can’t really deflect on that theory, if you’re talking for 2hrs about bodybuilding, competitors, shows and weighing in on rumors. If that doesn’t make you a news outlet or news show, then I don’t know what does.

In the end, while I feel for Sergio, he really should have known better. This wasn’t the first time and it certainly won’t be the last time a person in the fitness industry gets burned. My hope is that someone reading this article will remember it should they ever feel tempted to open up to someone. Be very careful what you say and who you say it to. If you say something to just one person and it goes viral, then you know who burned you, but in Sergio’s case, he confided in 5 people. If all five people were active in the fitness world, I’m just surprised it remained a secret for as long as it did. The bodybuilding world is the last place you ever want to open up.

With regards to Oliva, he promised fans that he’ll be doing the 2021 Arnold Classic in Columbus, OH. He also made a point to send out an open invitation to all the superstars of the IFBB Pro League, to really consider doing the contest. Although the event won’t qualify competitors for the 2021 Mr. Olympia, it remains the second most important contest in the sport and the fact it will be in its hometown, brings back a desperately sought feeling of normalcy back. While the O will be in Orlando, FL, for the second consecutive year, the Arnold will be held where it’s always been held. That’s extremely powerful. If Sergio were to win this contest, it would be a total gamechanger with regards to his future Olympia endeavors. We, certainly, would love to see that!!

What’s your take on Sergio’s dilemma?