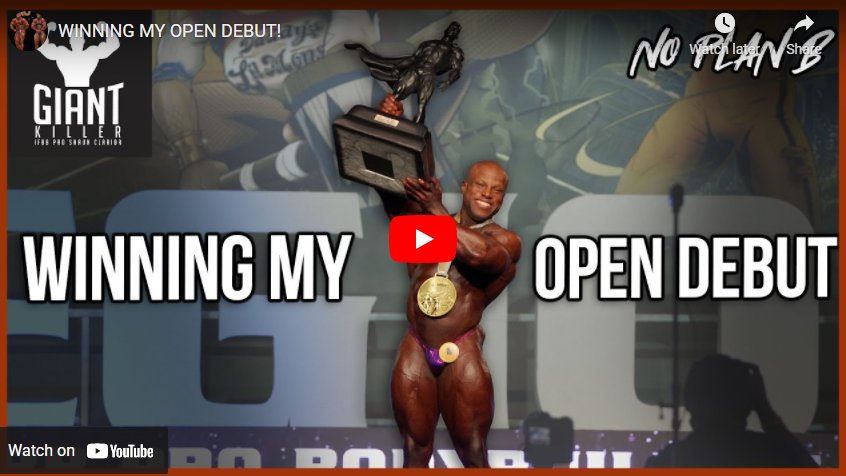 As many of you know, I’m not a fan of the Special Invite. To me, the Mr. Olympia should be reserved for the best in the world. Competitors should either be former Mr. O’s – or – they should have qualified by being Top 5 the year prior, having won a pro show during the calendar year, or qualified through points. Back when the contest first started, you had guys who had won the Universe, the World’s, and other top titles, all battling to be the best. This is why the Olympia is known as the Superbowl of Bodybuilding.

Initially, when they offered a Special Invite to Kai Greene, I wasn’t all that upset because he’d won runner-up before. When they offered a Special Invite to The Maryland Muscle Machine, that was a little different. I was at that contest in Pittsburgh where Kevin announced he’d do the Olympia. But the Kevin that prepped for that contest was living with pain, somehow getting through therapy, and his appearance was more so for the fans than anything else. Everyone hoped to see Kevin and Phil battle it out and they even let them pose side by side for a few shots, but it was all marketing. When they gave the special invite to Cedric, because of his military obligations, that drew some concerns. McMillan, in his prime, pushed Kai Greene to the limit and he was also an Arnold Classic champion. If Cedric dialed it in and came in at 100%, he could easily have broken into the Top 5. If that happened, then he’d be legitimately qualified for the next year’s contest. While I wasn’t too thrilled at that idea, I did respect giving him the chance because of him protecting America. I believe men and women in uniform, most definitely, deserve some latitude.

Perhaps the most glaring instance where I was vehemently opposed to the special invite is when Big Ramy got one. The reason there was covid; however, why did Ramy wait till the very last contest to qualify? Some folks might have penalized him just for that. Plus, the world was living with a pandemic; maybe he didn’t take sufficient precautions. In any event, in 2020, Ramy was the only man on the Olympia stage who had not earned his spot to be there. Then, for the first time in history, a guy who got a free ride to the Superbowl of Bodybuilding, left with the Sandow in hand.

What Shaun Clarida did at the 2021 Legion Sports Fest is nothing short of amazing. You had a 212 guy who didn’t alter his physique, competed at 177lbs, and beat guys over 100lbs heavier than him. Not only did they dwarf him on the scale, but they towered over him, heightwise. Nonetheless, he posed hard, brought amazing condition, and was round and full. This is why Shaun Clarida is often called a mini Ronnie Coleman. As a result, the former 212 Mr. Olympia was able to handily beat guys like Regan Grimes and Sergio Oliva Jr. His win in Reno qualified him for the Open Mr. Olympia in 2022. Since he’s a former 212 Mr. Olympia and because he took runner-up at the 2021 212 Olympia Showdown, he’s double qualified for the 2022 Showdown. Now, in a fair world, Shaun would be allowed to compete in both Olympias. Even though it’s not allowed at present, he earned it, and instead of the Federation/Olympia forcing him to choose between the two divisions, a special exception could easily be made, allowing him to compete in both.

Some critics of allowing Shaun to do both Olympias, cite that if he’s allowed to, other 212 competitors may try to follow in his footsteps. I see no problem with that, do you?

Also, just because a 212 Mr. O could do it, isn’t it a little unrealistic to think that many other 212 competitors will be able to win an open show with ease? It’s possible that one or two more over the course of a year or two may, but what Shaun did in Reno, was make history. That sort of thing doesn’t just happen and I feel that by denying Clarida the opportunity to compete in both divisions, that that’s akin to punishing him for working hard and achieving the impossible.

Also, if the special invite is done to appease the fans, and if that’s the primary justification for allowing someone who didn’t qualify to compete, then why not have a similar exception made for someone who worked hard and who the fans want to see, potentially, do well in two divisions? I mean, could Shaun beat Big Ramy? Realistically, I’d say no; however, if we’re speaking purely in terms of theory, where physiques are compared, muscle by muscle, where posing is assessed shot by shot, then yes, it is possible. That aside, though, could you imagine the sheer pandemonium of seeing 177lb Clarida standing next to 300lb Ramy, even for a few poses on stage. That’s the kind of battle that would sell itself; so why not have it? Why not give the fans something that will not only blow their minds then, but that they will reflect on for a lifetime?

And yes, that matchup could take place, if Shaun picked open, only, but then why should he give up a very likely win at the 212 Showdown that same weekend? I mean let’s not forget that Derek Lunsford won the title in 2021 by the skin of his teeth. I don’t want to take anything away from his well deserved win, but it was very close. Shaun, Derek, and Kamal, were all very much in the mix and anyone of those three living legends could have emerged the victor. So with that said, if Clarida picks open bodybuilding, he’s giving up a fantastic chance to win his title back in the 212.

If he chooses 212, then he’s basically throwing the Olympia qualification his Reno win got him in the trash. Life isn’t fair – I get it, but it seems awfully wrong, especially in a sport that has no issue with special invitations. It’s just a question of doing it for the first time, is all. And who knows if there will be a need for a second or third special exception? It may turn out to be a once in a lifetime type deal.

Also, I think the opposition to the idea of a competitor competing in two distinct divisions at the Olympia, would be a heck of a lot more plausible if we were talking Classic Physique and Bodybuilding or Bodybuilding and Men’s Physique; however, 212 and Open are both bodybuilding.

When an amateur turns pro at Nationals, USA’s Universe or other pro qualifiers, he doesn’t turn 212 Pro or Open Pro, he turns pro in bodybuilding. I get that there’s two divisions, but they’re really both bodybuilding. Granted, this is the way the pro side of the sport is drawn out and these are the rules that keep everything moving in an organized manner. There’s definitely a strong argument for upholding these rules, but there’s also a little wiggle room. I’m not an official, just a writer, but I write based on the fans’ will.

Although we’ve heard from Olympia spokespeople that Shaun must choose, it’s not entirely their call. I’m hopeful that we may see Clarida get some kind of permission to compete in both 212 and Open Bodybuilding at the 2022 Mr. Olympia. The keyword there is “may.” Will it happen, who knows? Could it happen? Absolutely. And if it did, the 2022 Mr. Olympia would be one for the record books!