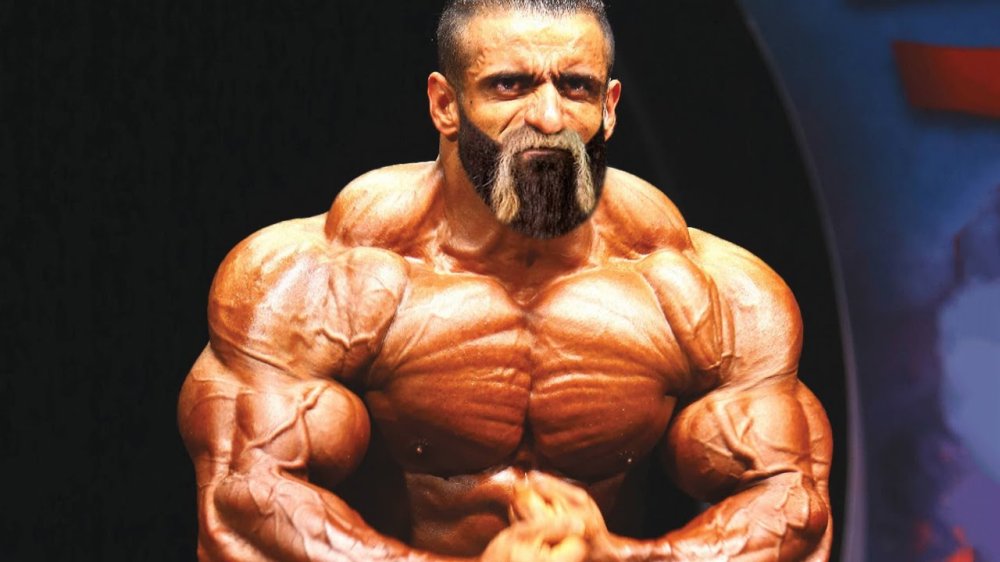 If you aren’t paying attention to Hadi Choopan, you’re missing out on one of the best bodybuilders in the world. Not only does his physique do the talking, but merely watching Hadi on stage, you can tell how much fun he’s having.

In 2017, Hadi Choopan won the Mr. Olympia Amateur show, earning him his pro card. He then jumped right into the IFBB Sheru Classic to make his pro debut, where he placed 2nd. If you follow his career for the next couple of years, Hadi Choopan never placed outside of 1st or 2nd.

At his very first Olympia back in 2019, Hadi shocked the world by walking out on stage with what many considered the most complete package out of all the competitors up on the stage. While placing 3rd at his first Olympia, Hadi Choopan took home the “People’s Champ” award and had the fans going nuts.

Fast-forward to the 2020 Mr. Olympia, and there was much speculation on whether or not Hadi Choopan would even be able to get his visa in enough time to make the trip over to the states to compete at the Olympia in Orlando, FL. With no time to spare, Hadi was approved and jumped on a plane to come over. This last-minute travel caused Hadi Choopan to retain a bunch of water and could have been the reason why he didn’t place better than 4th at the show.

That being said, many thought Hadi deserved to beat out Phil Heath and take 3rd place due to Phil being off (again). However, one thing is for sure, the people love Hadi Choopan, and the last thing competitors should be doing is sleeping on him in any lineup he steps into.

The Persian Wolf is HUNGRY

Without a doubt, Hadi Choopan is hungry to take the #1 spot in the world and prove to everyone that he is the best bodybuilder. And, quite frankly, he’s building a pretty solid case for it. Hadi Choopan has been training under the watchful eye of Hany Rambod, “The Pro Creator,” for years now, and they’ve clearly found the secret recipe to bring Hadi into shows ready to win. His physique speaks volume, and it’s clear that Hadi Choopan isn’t sandbagging his off-season.

When you look at Hadi Choopan, he very much reminds me of Flex Lewis. Short in stature but with a massive physique that demands attention. He’s put on a considerable amount of size over the last few years and seems to get better and better with each passing year.

Not only is Hadi Choopan thick, but he’s got the conditioning that every bodybuilder on stage is striving to nail. He’s got excellent muscle separation, a defined and etched out midsection, thickness from all sides, a serratus that many bodybuilders never achieve, and a joyful, almost kid-like love for the sport while up on stage.

Yet, don’t mistake his smile and fun up on stage as a weakness, Hadi Choopan will chew up and spit out just about any bodybuilder that gets in his way. And I genuinely believe we haven’t even seen the best version of Hadi Choopan yet. I think over the next two years, we are going to be in for a real treat.

The Best is Yet to Come

It’s difficult to look at Hadi Choopan and find many areas where he could improve. Could he add a little size? Sure, but so could every other bodybuilder out there (outside of Big Ramy). Going through and looking at some of the high-definition photos from the 2020 Mr. Olympia, there are a few areas I think Hadi could focus on in the off-season to further improve his look.

Now, again, he could have been holding onto some water from the long flight to the states, but the detail in Hadi’s back could pop a little more. Even adding a little size to his back wouldn’t be a bad idea to provide some extra thickness and a 3D look. It’s not that he doesn’t have a great v-taper from his lats down to his waist, but the other all thickness and detail could be improved slightly. Hadi’s glutes could have looked better, but again, I believe the water weight issue could have played a role in hiding some of his conditioning.

Hadi Choopan in the front poses can stand next to just about anyone and hold its own. However, the fact that he can hit a vacuum pose at his size is incredibly impressive, in my opinion. You don’t see many competitors in the men’s open division being able to hit an old-school vacuum pose. His arms are some of the best in the game, and I’ll go out on a limb and say Hadi Choopan is underrated even though he’s been placing exceptionally well in every show he’s entered.

Throughout the year, you hear about Phil Heath, Big Ramy, Roelly Winklaar, and Brandon Curry. Yet, no one is really talking about Hadi. This is a big mistake, yet I don’t think it phases Hadi one bit. In fact, I think he likes being under the radar.

2021 Hadi Will Be in the Running for the Sandow

I’m going to make a bold prediction and say that Hadi Choopan will place 1st or 2nd at the 2021 Mr. Olympia (assuming he has a productive off-season and can stay healthy). Again, I placed him ahead of Phil, which would have put him in 3rd. With some improvements, I can see him edging out Brandon Curry. And, unfortunately, with Big Ramy being hit or miss with his conditioning (even after just winning the Olympia), it opens the door and conversation of Hadi Choopan walking into the 2021 Mr. Olympia competition and standing in the center of the callouts.

What do you think? Are you a fan of Hadi, and do you think he’s going to be in the running for the Sandow in 2021?