WHAT IS PHIL HEATH PREPPING FOR? LET’S THINK ABOUT IT 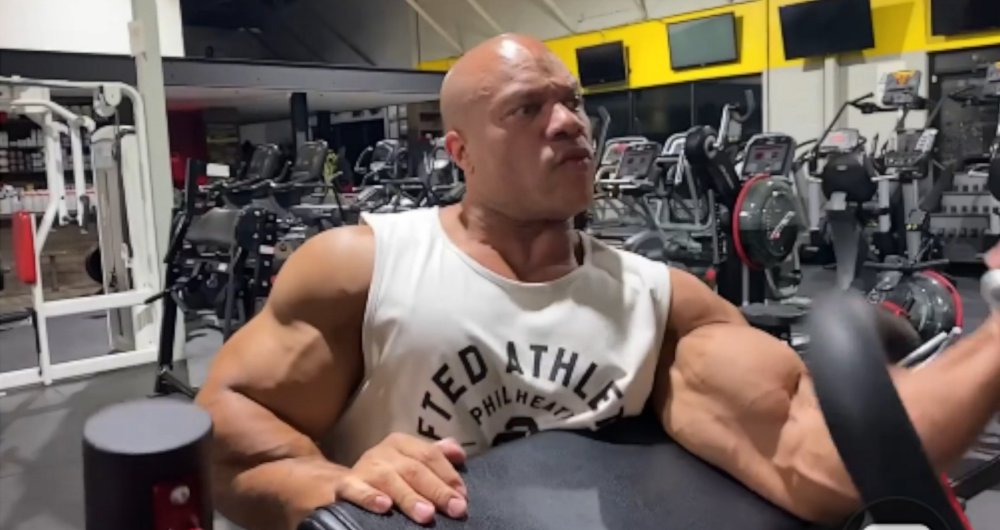 Phil Heath is probably sitting back laughing at all of us making predictions of what he’s prepping for. While I have no insider information about what he’s up to, I’m going to throw a few predictions out there (maybe one of them is correct?).

In a comment on social media, Phil mentioned that he is, indeed, prepping for something, but it’s not what people are guessing. I mean, that’s sort of cryptic, no? I mean, has Kai Greene entered the chat?

There’s no denying that Phil Heath is looking great. He seems to be in shape and definitely leaning out as if he would be prepping for a show. But here are some of my predictions as to what he’s actually “prepping” for.

A while back, Phil Heath signed on the dotted line to work with Dwayne Johnson and Dany Garcia’s Seven Bucks Productions. However, we haven’t seen anything in motion following the announcement – but that doesn’t mean things haven’t been in the works behind the scenes.

How do we not know that Phil hasn’t been taking acting classes for the past year or so? I’m not making any excuses as to why he placed third at the 2020 Olympia, but what if his mind and body simply weren’t all in? This is merely speculation, but maybe it played a role? Even if a little one.

When you think of big and muscular actors today, who comes to mind? Probably Dwayne Johnson, right? Can you name any others? You’d probably have to do some thinking and may not come up with any other names. So, what if Dwayne and Phil teamed up to be in a movie together?

Or what if Dany and Dwayne are just helping Phil get ready for his own solo role on the big screen? We already knew he was working on some sort of documentary that hasn’t come out yet with the production company. Maybe they just never finished it due to the pandemic?

2. An Appearance on Television

Circling back to actors, how many jacked bodybuilders (former or present) do you see on television? None really. Sure, you saw guys like Kali Muscle, Mike O’Hearn, and a few others in some commercials, but nothing BIG in terms of a role on a television series (at least, not to my knowledge – correct me if I’m wrong).

Seven Bucks Productions has worked with NBC, HBO, and BET on various projects, so what if they are grooming Phil to play a role on a sitcom? I don’t think this possibility is out of the question.

Maybe this will be his first acting role before moving into movies and making a career on the big screen. After all, what does he have to prove in bodybuilding anymore? Not only that but there’s way more money in film and television than there will ever be in bodybuilding. If Phil were to win the Olympia, he’s only looking at a few hundred thousand. He could do that (and more) by signing a movie or television deal.

The fact is, the IFBB isn’t doing anything to help Phil’s career. They’re not picking up the phone on Phil’s behalf, and Phil has openly spoken about this. So, maybe Phil is looking to take a run at a different industry?

Plot twist… what if Phil and Kai are working together on a project? Dun dun duuuuuun! I don’t know. Again, I’m just thinking out loud.

Now, for the final guess, which has multiple parts.

When you think of the major bodybuilding shows out there, the two big ones are the Arnold Classic and the Olympia. Phil is no stranger to the Olympia stage, but he’s never won the Arnold Classic. What if Phil is prepping to make an appearance in Columbus to try to secure a title at a show that has slipped through his fingers in the past?

Here’s the thing, Phil is lean enough all year long that he could secure a movie or television role and be in “good enough” shape that he wouldn’t need to go into prep mode. This leads me to believe that there might be something bodybuilding-related that Phil is getting ready for.

I highly doubt that Phil will step on any bodybuilding stage other than the Olympia or the Arnold Classic. However, I don’t see him jumping back on the Olympia stage after losing to Shawn Rhoden and then getting pushed back to third last year.

Therefore, the Arnold Classic is the only show I can really see him getting ready for. Even then, the reason for stepping on the stage in Columbus could have a dual purpose.

What am I getting at?

What if the documentary that Phil was working on with Seven Bucks Productions was supposed to have Phil coming back to the Olympia and taking back his title – but that never happened? Maybe they’re trying to finish the documentary and have Phil win one last show and create a “farewell” moment and document it?

I think the chances of Phil coming back and winning the Olympia again are slim. Nor do I believe that Phil has any desire to really get back on the Olympia stage. But we’ve never had that final moment where Phil announces his retirement, and we get to see his “last dance.”

Maybe this is going to be his farewell show, and he’s prepping to make the announcement and document it with Dany and Dwayne? After all, I can’t see Phil walking away without giving the fans one last look at one of the greatest bodybuilders of all time and allowing the fans to give him the respect he deserves as he poses one last time.

But what do you think? Are any of my ideas here something you feel could be what Phil Heath is prepping for? Let us know down in the comments.