WHY DID DAVE PALUMBO PULL THE SHAWN RAY INTERVIEW? 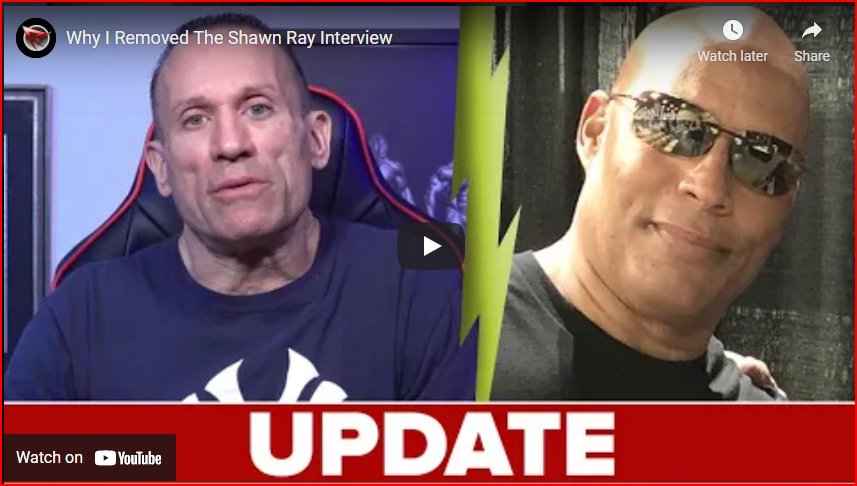 By this point, everyone has seen the Shawn Ray interview at RXMuscle. Dave owns and runs the site. There are folks who have an ownership stake, like John Romano and others, but Palumbo is the shot caller. He decides who’s interviewed, what’s edited, and what’s published. The interview consisted of both men speculating over the death of Mr. Olympia Shawn Rhoden, just two days after his passing.

It was poor timing, insensitive, and a clear attempt to grab headlines and get traffic. Ray isn’t to blame for that – Palumbo is. Ray doesn’t own the site; if he wanted to put his views out, he could have easily done so at Digital Muscle, Shawn Ray TV, or any number of other outlets that would have had him on. The fact is, he was at RX and most of the people who have sounded off against Shawn, have given Dave a pass. That’s hypocritical.

Now, Dave did, finally, bow to public pressure and removed the video. I’m sure he has backups and I wouldn’t put it past him to repost it days, weeks, or months after the anger subsides. Let’s not forget that Palumbo is in a race for views and relevancy with popular social media influencers some 40yrs his junior. While RX commands the unwavering loyalty of iron geriatrics, it’s a lot harder to get college-aged lifters tuning into programs that, largely, feature men getting fitted for silver sneakers. Therefore, when it comes to marketing and generating hype, I don’t think this will be the last we’ve seen of the Shawn Ray interview. The fact is, Ray has an edginess and danger factor that’s appealing to many of the biggest websites. Let’s not forget, that just in recent memory, he’s commanded important posts at Muscular Development, Generation Iron, and now runs Digital Muscle. When Dave asked him on – or – allowed him to come on (that’s up for debate), he knew what he was getting – and he wanted it. Therefore, when Dave says “shame on me” on his rant explaining why the video was removed, it’s warranted.

The decision to pull the video was PR. If Dave truly cared, he would have removed it when his dear colleague Chris “The Technician” Aceto asked him – on air, days ago. He would have done it when Brad Rowe and Sergio Oliva Jr. had asked, but he didn’t. He would have removed it when Nick Trigili (who’s quickly picking up RX defectors bored with the stagnant programming) publicly implored him to do so. He didn’t. Then, all of a sudden, from the kindness of his heart, he removes it on Thursday, as the story begins to lose steam and is sure to die out by the weekend. That’s how bodybuilding news works. No matter how angry people may be, stories lose momentum after 2-3 days. This is the product of the vast number of social apps, websites, forums and groups that are all over the net. Back in the magazine days, people had to sit and stew for a month or two, waiting on new editions to hit newsstands. Now, however, they can talk a topic till their blue in the face. Some people say all the crazy shit within 12-36hrs. Once that time passes and they’ve seen their fill of videos and heard their portion of podcasts, their attention jumps to something else. They may still hold the same opinions, but the fire is gone.

So, as people began to write Dave off, basically accepting his position that as a courageous journalist, he’d rather go down with the sinking ship than sacrifice his journalistic integrity (e.g. removing a video that caused intense social media backlash), then all of a sudden Dave makes this very noble gesture, resurrecting the story, and keeping it going into the weekend by being the man of the people and removing it. Who’s to say Palumbo didn’t have this all planned from the beginning?

I mean do you honestly believe Dave doesn’t think his coverage could, potentially, hurt peoples’ feelings? Really? I’m not saying he goes out of his way to do so, but do you honestly think he gives a f*ck? There have been plenty of people who have been hurt from RXMuscle coverage. I know of people who have begged Dave to pull videos and he wouldn’t budge. Call me a skeptic all you want, but I actually worked at the website and I worked closely with him for 80 episodes of Muscle In The Morning. I was the writer for show for four months in 2014. I’m grateful for that opportunity and I think Palumbo is a fine journalist, but he’s also a business owner and an influencer (before that was even a thing). He’s very intelligent, very cunning, and very calculating. While he may have removed the video in an act of conscience, I believe it was more likely motivated by keeping the story going as well as boosting his image in the industry.

I have been very clear that I strongly disagree with Shawn Ray’s mentioning of Shawn Rhoden having a drug problem and/or using recreational drugs; however, for a 30+ minute interview, that discussion lasted 30 seconds at best. And while I disagree with SSR on a couple other points, I do agree with the majority of the points he raised. With regards to Ray’s arguments and Palumbo’s, I also agree more with Ray’s. I think Shawn made more persuasive cases, but everything that was discussed was speculative. Neither gentleman had a factual leg to stand on and that’s also why the interview was both bizarre and in hindsight, insensitive. That being said, the demonizing of Shawn Ray, I feel, has largely been used by people who never liked Ray in the first place, to dogpile on him. Is that right? I don’t seem to think so, but to each their own.

The fact is we lost a great person, an amazing bodybuilder, and a great ambassador for the sport, in Shawn “Flexatron” Rhoden. Shawn Ray called him a great man and called his death, a tragedy. I won’t add my name to the list of people looking to demonize Shawn Ray, while giving Dave Palumbo a pass. I also don’t believe Dave’s decision to remove the video was motivated by anything except fanfare and creating more news out of old news. I guess we’ll see if I’m right or wrong in the coming days.

If RX continues to talk about this video and its pull-down, into the weekend and beyond, then I’d say that would point to my theory. I could also see Dave trying to bring Shawn Ray back on, either to clarify or revisit the deleted episode. I could also see RX Muscle trying to create an Iron Debate type program out of this, maybe in 4-6 weeks, putting Guy Cisternino vs Shawn Ray or Shawn Ray vs Chris Aceto. This wouldn’t be the first time Dave did that. I honestly don’t think this is the last we’ve heard of this and further, I also think we may see this video either re-released or clips of it re-used by RX in future productions.

As Nick Trigili astutely pointed out, Dave is a hits whore, he’ll do whatever it takes to get traffic, so the idea that his conscience kicked into gear all of a sudden and made him remove a video gone viral out of some kind of moral compass, could be true, or it could be a bunch of bullshit.

I believe I’ve put my cards on the table. Only time will tell what happens. Do you think Dave’s decision to pull the video came from his heart or do you think there’s more to it than he’s letting on?