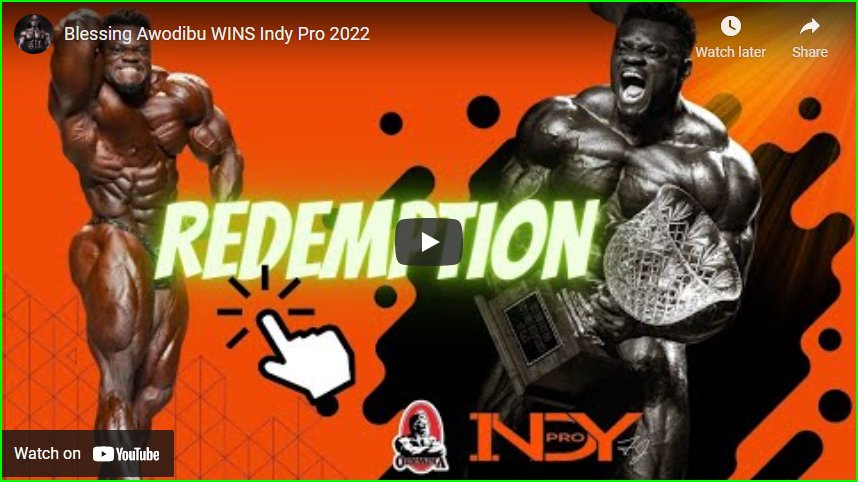 When it was all said and done the man, the myth, the legend Blessing Awodibu emerged victorious. This win was special for a variety of reasons. For starters, a great many people in the industry and more specifically in the media see Irish bodybuilders as a combination of media fanfare, marketing genius and a good physique to boot. His look and muscles often play second fiddle to his over-the-top personality. That’s not a bad thing though.

In a sport of lunkheads with little if anything to say Blessing’s approach is a breath of fresh air and his style often has a quick punchline. He’s so good at it that here I am writing an article about his big win, but we’re talking about how effective he is as a bodybuilding influencer. That’s important though because for the title he just won and the sport he competes in it’s important for his sponsors and it’s also important for his own fanbase.

In addition to snagging a Mr. Olympia qualification just seven months out from the Super Bowl of bodybuilding Blessing did so in a contest that could be described as an all out battle. It was such a nail-biter that even after the prejudging there was a great deal of speculation as to who was going to win. It was never a clear-cut show and I for one agree with Ron Harris that these are the shows that are the best to watch.

Also, I have to give a major shoutout to Muscular Development for still doing bodybuilding contest coverage. It’s often very expensive, very difficult to plan logistically and that’s not even considering the many rules and policies that media must adhere to when covering a major event such as this. Huge kudos to Steve Blechman, Ron Harris and their whole team.

So what’s next for Awodibu? Well, that’s a very good question. One of the most stunning elements of Saturday’s big win is the fact that Blessing hasn’t been working very long with his current coach George Farah. Now we all know that Farah’s credentials speak volumes. He’s one of the most in-demand coaches in the business with a resume that even outshines some of his contemporaries in the annals of legendary gurus. As a former highly-decorated champion himself, he knows just how much strategy is employed in rising to the top. Right now everyone is going to want Blessing to do everything! Media outlets will line up for interviews, promoters will start firing off DM’s and texts trying to see if he’ll either compete at their show, guest pose, or maybe just work a Redcon1 booth sometime down the road.

When you win a bodybuilding contest especially one that’s got the production value of a Dave Bowers Production you suddenly start to feel the love from the entire bodybuilding world. I think Farah and other key members of Blessing’s camp will be keen to the danger of the champ spreading himself too thin. Right now no one’s talking about last year’s Olympia or this year’s Arnold, the hot news right now is the Indy Pro. And what’s very interesting is that no one is terribly upset about how the judges scored the show. That’s one of the good things about tough shows. Even the guys who took 2nd and 3rd can’t be upset at the person who won. It could just have easily been them.

The judges had their work cut out for them here. That said, Blessing needs to exercise tremendous discipline in the coming days. The same way he showed it with his training, nutrition, and overall prep for the big win he must also employ it in the coming days by being able to decline offers. Some promoters are relentless, but can you blame them?

There’s many things that make a contest successful and one key approach is having people that are hot in them. Right now Blessing is hot and he’s headline news. I’m sure by the time he sees this article he will have gained a whole new group of bodybuilding diehards celebrating him and his career all over the internet. I use the term diehard with a bit of dry wit only because many of these so-called fans will move on to whoever wins the next contest on the schedule. This is why Blessing needs to be strategic and capitalize on the momentum without overextending himself with commitments later. Right now it’s easy to say yes to everything, but as the schedule nears the holidays and then the Mr. Olympia in mid-December, time will become scarce.

2022 just like 2021 has an Olympia that’s after Thanksgiving, two weeks before Christmas and New Year’s and which makes dieting and training all the harder. And no one’s training then. It’s the time to eat plenty of good food and be merry, but not for the guys vying to topple the largely-absent reigning champion Big Ramy. Also, the Mr. O is back in Las Vegas which many claim is the new Venice Beach, CA so that only increases the pressure. If you add nonstop appearances to that even if Blessing doesn’t compete again till the big dance he could still burn out.

The best case scenario is that he does a boatload of media for what’s left of May, plans out some sensible guest posing appearances and some expo booth work, but also set aside plenty of time getting to know George more and making the necessary improvements to break into the Mr. Olympia Top 6. After all, these two don’t have a lot of time together under their belts, but they do have a successful contest prep and they’ll have another half year to see how the Indy champ responds to the training, diet & nutrition and supplement protocols George recommends.

For as much as the top coaches like to attribute the lion’s share of their success to hard work each top guru has their own approach. This is why they’re at the top. That said, the ability to bring a physique-based athlete’s very best at specific times can be very tricky. After all, you don’t win the Olympia for the condition you have on Instagram, you don’t win it for looking gnarly at a photoshoot either. You have to nail it at prejudging and nail it at the finals. If you can look amazing for a few minutes on two separate days you can write your own ticket. After all, so many guys have what it takes to be the best and they have the super well-known coaches, but they just can’t tie it all together when it’s time to do so. Blessing and George nailed it in Indy, so it definitely has sparked many of our interests for what they’ll be able to accomplish this December at The Zappos Theater in Las Vegas, NV.

Do you think Blessing could be the Darkhorse of the 2022 Mr. Olympia? Do you think he can break into the Top 6? Maybe another rematch with Nick Walker? This is definitely an exciting time for the sport. Huge congrats to Blessing and George on their big win, from all of us here at IronMagazine!