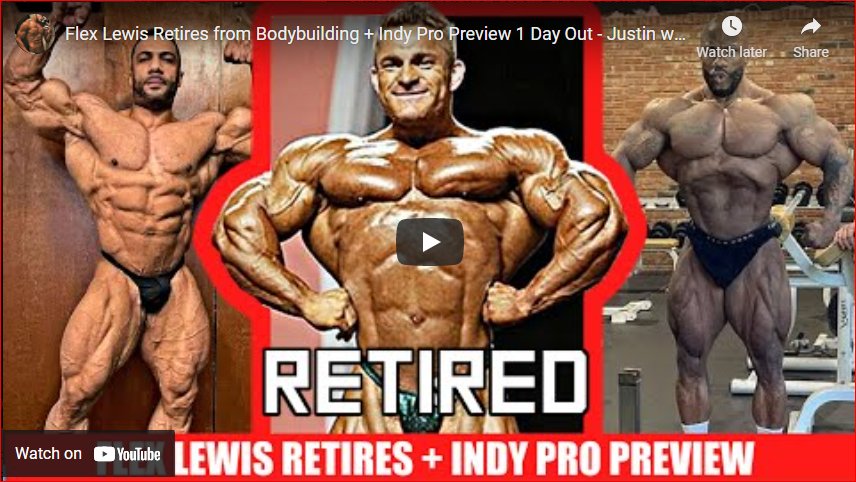 This article isn’t as much about Flex Lewis retiring, as it’s about the failure of two bodybuilding divisions that are essentially separate from one and other. When the news hit that The Welsh Dragon was hanging them up, it sent shockwaves throughout the fitness industry, but it went beyond that. Unlike the current Open Mr. Olympia, Lewis did a fantastic job as the #1 guy in his division. He traveled the world extensively, going to meet-and-greets, huge expos, in-store appearances and posing seminars.

He frequently guest posed, competed in a number of events, and had/has one of the most active social media presences of anyone. He came from an era when guys like Jay, Phil, and Dexter were all over the place. He successfully defended his title against some fierce competitors, including the likes of Eduardo Correa, David Henry, Jose Raymond and Derek Lunsford. He always took the stage seriously, showing a great respect to all parties involved. He gave the judges and expeditors their respect, he made himself available to the media, and he was always a fan favorite. This is why, years after he last hit the stage, his hardcore supporters rallied together and tried to lobby the powers that be, into giving Flex a special invite to the 2022 Open Mr. Olympia. And now, he’s retiring.

While I never believed in the special invite, thinking it was overdone and given to competitors who really didn’t deserve it, I thought it was the right move with Lewis. Even when the late Cedric McMillan got one, I was perturbed. Why did he deserve one? Just because he was in the military? Countless competitors that are on active duty compete and qualify, so why couldn’t he? That said, if the special invite was ever warranted, I thought it would be for the greatest 212 bodybuilder that’s ever lived. To have seen Lewis forced to qualify would have been insulting.

From what I saw on social media, it looked like Flex and Dan Solomon had had a meeting. I never knew what came from it, but a lot of people speculated. The talk around the water cooler was that Lewis got a special invite; however, I never saw anything formal so I can’t say one way or another. Plus, these meet-ups are nothing uncommon in our world, especially when it comes to Dan. He’s a guy who’s all about networking, but he excels not at simply making connections, rather, he excels at maintaining them. That’s the part that takes real work. He stays on top of things, he stays in touch, and he’s earned the respect of countless champions for it. He’s not just your friend when you’re on top or in the news, he’s consistently in your corner.

As a result, I think Dan has been able to land some pretty big deals and work some pretty amazing things in the short time he’s been running the biggest contest in bodybuilding. That said, Dan’s isn’t the only word on who gets the special invite. Jake has a say, but so does Pittsburgh. While I’m sure Flex would have received the nod, who knows how long it was going to take, and who knows if the waiting game, coupled with the fact he’d been off the stage for so long, had a direct impact on his decision to retire.

Here’s a guy that at 100% could beat Big Ramy, but he retires? Here’s a guy who all the while was winning 212 Showdown after 212 Showdown could have and should have been compared to Phil Heath. Heath’s run and Lewis’ fully illustrated the bizarre reality that bodybuilding has had to endure. Whereas in the 70’s you had Franco and Arnold battling for the overall, in the era of two bodybuilding divisions, you have one that gets a lion’s share of the winnings and buzz, and another that’s languishing. Not only is it languishing, it was pulled from the Arnold Classic, without incident.

Very much like Women’s Bodybuilding was pulled from the Olympia Weekend when 10x Ms Olympia Iris Kyle retired, the 212 was pulled from the Arnold when Flex Lewis’ retirement was imminent. In a very way, Lewis was The 212, but what if he had been able to cross over? What if the winner of The 212 and under, had to face off against the guy who won the over 212? How exciting would that be? Imagine how much bigger the sport would be today, if 212 and even 202 champions back in the day, had had the opportunity to go toe to toe with the open guys, to settle who was the best bodybuilder in the world! And even in a situation where extremes played out, like Shaun Clarida defeating guys 100lbs heavier (e.g. The Reno Sports Festival), that was super exciting to watch. Now imagine watching a bigger 212 guy, like Lewis or Lunsford, winning everything in their division and then going against the open guy to see who was the best of all.

Bodybuilding is the only Olympia division where the #1 bodybuilder in the world is still in question. Traditionally, whoever wins their division at the Olympia, is the best in the world, right? Well, not so fast with bodybuilding. The guy who wins the Open, is technically, the best bodybuilder over 212lbs in the world. He never actually faces the 212 winner, so it’s not fair to say he’s better.

In the 70’s, particularly during the Pumping Iron days, the winner of the Olympia faced everyone, but now bodybuilding is split in two. It’s the only division that has this unusual setup and in my opinion, it’s hurt the sport. Guys like Flex Lewis could have ruled the entire sport, instead, were relegated to a secondary division, making 1/10 the money the top open Olympia winner made, and then forced to rely upon the kindness of promoters to give him an invite to the open. In reality, any 212 Mr. O should have an automatic qualification to either bodybuilding stage, but such is not the case.

The thinking behind having two divisions in one, from what I’ve always heard, is to reduce confusion. That seems nonsensical to me. If anything, having two divisions within one, leaves people scratching their heads. It’s also a great way to keep the best of the best from ever coming face to face with one and other. Just look at Clarida’s situation. Instead of rewarding a competitor who strives for greatness, who isn’t content with being the best in just one division, he’s forced to choose between the two.

How does keeping a bona fide giant killer from toppling a bona fide giant, help the grow the sport? How does denying the public the chance to see an epic showdown between the lightest and the heaviest, put the fans first? It doesn’t. And if we’re being totally honest, guys like Lewis aren’t going to sit around for months on end, twiddling their thumbs, waiting to see if the special invite is a go or not. In fact, The Welsh Dragon even put out a meme some time ago, showing his frustration with the process. That was extremely unlike him, but that spoke to his general dissatisfaction with the whole process. In a very real way, I think it contributed to him moving on. Because even if he’d received the special invite, would he have had a real shot of beating Ramy?

We know Brandon beat Ramy in 2021, but did he win? No, he didn’t. Perhaps, even if he got the special invite and even if he’d come in at 110%, that might not have been enough – even if Ramy was off like he was in 2021. Maybe Flex got to thinking things more clearly, and maybe when it was all laid out, and he could step back and take it all in, it just wasn’t worth it. I suspect that any notion of a comeback was really done with the fans at heart. Lewis has nothing to prove and even though he never got to stand next to Heath for the Overall, many believe he could have beat Phil, Shawn, Brandon and/or Ramy. He’s that good! But if his heart isn’t in it, he’s not going to tap Neil and embark on the kind of prep necessary to topple The Egyptian Phenom this December in Las Vegas, NV.

I’m sad to see Lewis retire, especially, because he could have won it all. That said, there comes a point in time when winning titles isn’t what life’s really about. The champ has a great family, a great life, and millions of fans that will support him with whatever he does. Competing is just one of many endeavors Lewis has on his plate. Plus, retirement doesn’t have to be forever; maybe he’ll come back one day, and maybe he won’t. One thing’s for sure, the current setup of Open and 212 bodybuilding isn’t working. Something needs to change, whether at the Olympia and/or across the board.