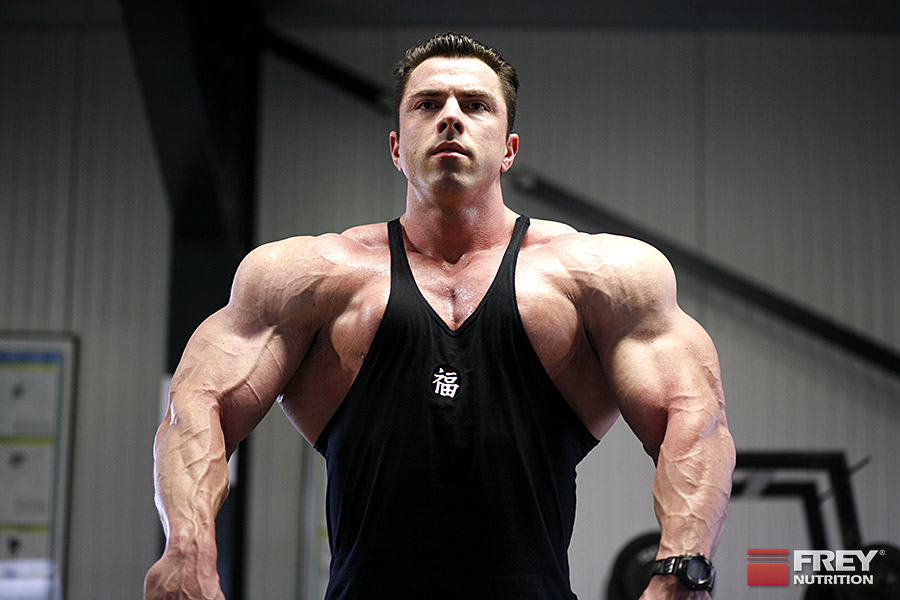 Legendary German bodybuilding champion Andreas Frey passed away in his sleep according to official sources; however, nothing is known with regards to a cause of death. He was just 43 years of age and with the exception of a rumored pec injury well over a decade ago very little is known about the towering German’s health. To the best of my knowledge he was strong and healthy, but we never truly know what’s going with someone’s health. After all, that’s a very personal topic and many folks are guarded about subjects such as this.

One thing that does speak to the champ’s good health was the fact he was super active with his company Frey Nutrition. This brand was wildly popular throughout Europe and had fans all around the world. I doubt that someone could have been as active with running a business in the fitness industry as Andreas was if he had failing health. That said he was a huge bodybuilder in his day and there’s a school of thought that believes that physique and strength-based athletes who use PED’s (performance enhancing drugs) are far more susceptible to premature death. This could, arguably, be compounded if the athlete has any family history of illnesses and/or preexisting conditions. Whatever the cause of death may have been the news couldn’t have come at a worse time. As everyone starts to wind down for the holidays but also get ready for the 2022 Mr. Olympia Weekend the fans were definitely not expecting a story like this.

The truth of the matter is that the passing of Frey sent shockwaves throughout the fitness industry. Many remember Frey from the 2006 PDI Night of Champions where the German giant battled with Top 6 Olympian Lee Priest.

What’s very noteworthy is that Priest was the star talent of Wayne Demilia’s new organization and the organization’s first two shows were its best. All in the all the PDI had 3 shows and Frey was a part of all of them.

The first contest was held in the UK, the second was in NYC, and the third and final event was held in the nordic countries. At the NYC Night of Champions Frey took the stage looking absolutely freaky but very much aesthetic. It should be noted that during this time you had Ronnie Coleman still on top of the world, along with Jay Cutler, and other mass monsters. Markus Ruhl was still very much on his A game and there was a tendency to put as much mass on as possible. Andreas could certainly have done so because of the fact he was so tall and had to fill out. Interestingly, the larger-than-life German opted to keep his shape and flow over any temptation to become another mass monster. This outlook for the sport and his own personal goal for what he wanted to achieve in bodybuilding directly contributed to why he was so competitive.

The reality of the matter is that when Wayne was piecing together the PDI, he was hoping to create a rival to the IFBB that included superstars like Lee Priest and Vince Taylor. When Taylor bowed out, it was a huge blow to the new outfit. Much to folks’ surprise Wayne was able to find some pretty impressive, undiscovered talent, like Andreas, that quickly made people forget about the fact the PDI didn’t get started with all the stars they had hoped for. Unfortunately for the PDI, Wayne’s health deteriorated and he wasn’t able to keep pushing beyond 2007. Luckily, the organization was around long enough to give guys like Andreas enough international attention to basically write his own ticket in business.

The Romanian-born bodybuilder who moved to Germany definitely struck it big – both on and off stage. Although I only had limited interactions with him, I can tell you he was a very nice and down to Earth individual. I like that he was able to evolve with the times and use the various social media platforms to grow FN all over the world. Just imagine how much Andreas must have seen the sport and industry change. He started competing in his mid teens in the 90’s, competed as a pro the following decade, and then was a business exec the years following that. The truth is when he got started there was no internet (for the masses at least), there was no social media, but when it was all said and done he was a catalyst for being one step ahead of the times. FN’s reach was impressive and their branding was always on point. They were very original in a field of nothing but copycats.

Andreas was a guy who loved bodybuilding and while he may have stopped competing he never stopped loving the sport. Very much like other company owners in Jay Cutler, Lee Labrada, and Rich Gaspari, to name a few, Andreas never stopped taking his training, nutrition, and supplementation seriously. He wasn’t about to “move on” because he was no longer competing. There’s a word for that and it’s “poser!”

People who can just leave the sport for good without their being any implications to their health (e.g. excacerbating injuries or health conditions), maybe never loved it to begin with . I’m sure there can be any number of other reasons people completely move on from bodybuilding once they stop competing but I’m speaking to what most people will think – especially if once you stop competing you also start a company that’s related to fitness. It’s really just a matter of perception.

Andreas was always a bodybuilder. He never “grew out of it.” From his mid-teens to his early 40’s, the sport played a key role in his life and everyone who knew him appreciated that in him. He was the real deal.

I can’t say enough good things about Andreas Frey and I can tell you that he will be greatly missed. I’d like to reiterate that we don’t know the cause of death and even if we did it’s not really our style to focus too much on that. The fact is the world of bodybuilding has just lost a great champion. Everyone at Iron Magazine would like to send Andreas’ family, friends, and fans our sincerest condolences.