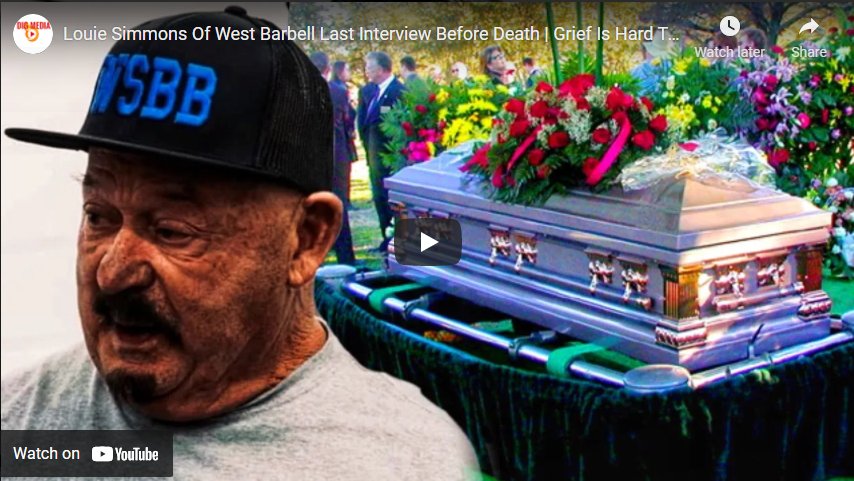 I first met Louie Simmons back in 2014 at Westside Barbell. I was there at the invitation of a friend who used to be big in the powerlifting community in Lansing, MI. I’d say who that was, but that would open up a can of worms that we can all do without. Let’s just say that at the time, this person helped me checkout what’s been known as the Mecca of American Powerlifting and I was able to meet the Godfather, himself, Louie Simmons.

Walking into that facility was unlike anything I’d ever experienced. I could compare it only with the East Coast Mecca of Bodybuilding, Bev Francis Powerhouse Gym. That said, this wasn’t a gym in the typical sense. If anything, it’s an industrial park, with numerous buildings that could be best described as enlarged garages, somewhere in greater Columbus, OH. There’s a diner just a rock’s throw away, which factors into everything. Beyond that, nothing really stands out. I don’t recall any elaborate signage at the entrance of this area – or – even at the facility itself.

Let me put it this way, if my friend’s black Humvee had not been parked outside, I wouldn’t have found Westside Barbell. In fact, I thought I was lost, but I was also looking for something that jumped out at me. In reality, the people that belonged at Westside, knew exactly where it was. This was a tight knit community that was highly-selective of new members. Unlike other “gyms,” you didn’t join by paying a membership, you joined by proving yourself. The walls had boards slapped all over them, with coefficients written in chalk. The lifters on the walls had earned their spots by the numbers they put up and none of them ever got comfortable. If they broke a world record or set a PR in the facility, they were hard at work to beat those numbers.

The people who were accepted were nothing short of badasses. When you looked up hardcore in the dictionary, you saw a picture of them. They didn’t look a part, they lived it. Some had regular gym attire on, others looked like they were on their lunch break from a steel mill. They didn’t talk a certain kind of way, they didn’t scream or dance around their workout stations – they just put up huge numbers and they were consumed by the pursuit of getting better. Some had mohawks, some were bald, others were tatted-up and some looked like white collar businesspeople. That said, they all spoke a common language. They lifted big, ate big, and they knew all about supps – from the food-based to the exogenous. Some were raw lifters, others suited, but they were all on Cloud 9 because they’d made it.

Making it didn’t mean they had a sponsorship or a free gym membership, rather, it meant that they were part of the family. And whenever Louie came into the room, they all wanted to hear what he had to say. You could have a guy that just benched hundreds of pounds, seemingly, effortlessly, but he wanted to know what Louie thought about how he could improve. Whatever the Godfather said, was akin to the words of God being etched in stone. There was no questioning it, there was no second-guessing. If you were lucky enough to train there and lucky enough to be a part of the family, and on top of all of that, lucky enough to get feedback from the most recognizable and most respected powerlifter in the history of the sport, then you listened and implemented.

Louie Simmons helped countless individuals. He did it out of love of strength-based sports. He had an understanding of performance enhancing drugs that would put most chemists and even medically-trained professionals to shame. When you look at the talking heads in bodybuilding, the wannabes, the charlatans, and the few who knew, you’d be hard pressed to find any that knew as much as Louie did. He knew what the Russians used, he knew about the Eastern Bloc training styles, and he knew what worked to make the best, even better. The knowledge didn’t come from textbooks, it came from trial and error. He had been one of the best and he had made so many others, that his knowledge was unquestionable. When I say he made them, that’s what I mean. He helped guys who were freakishly strong, but he turned them into champions. He gave them a blueprint to follow; he offered himself up as a resource, and opened the doors of his gym. This benefit wasn’t extended to just anyone. It was reserved for a very small squad of guys who constantly vetted itself. While Simmons could have built an empire, he was more interested in creating and maintaining a small crew of people. This inner sanctum was sacred. They’d train and go to breakfast, they’d lift and they’d break bread. And while this seemed pretty basic, it’s what they did, and what worked.

There were so many people who liked to namerop Westside or Louie. In their mind, that automatically opened doors and allowed them to make money. Sure, that was true to an extent, but real people in the sport could weed out the fakers from those few who really were part of Louie’s crew. With just a few questions or maybe a quick phone call, it became abundantly clear who you were dealing with. If, in the rare case, you were dealing with someone who had legit ties to the Godfather of Powerlifting, then that’s where you saw all the doors open and everyone treated said person like a rockstar.

I don’t care if we’re talking America, Europe, or a remote arctic part of the world, if there was a powerlifting scene, everyone knew and revered Louie Simmons. His starpower, if you want to call it that, was undeniable. That said, I doubt he ever wanted fame, as much as he wanted to make a lasting impression on the sport. And that he has. No one can or will replace him. He may no longer be with us, in the flesh, but his spirit will live on.

Unlike bodybuilding, which is largely run around one major federation, powerlifting has multiple ones. There’s the natural vs the enhanced, the raw vs the shirted, but even these distinctions don’t tell the full story. There’s a lot of politics, there’s a lot of different judging criterias, and there’s a lot of powerful cliques who all aim to corner the sport. I could easily ratte off half a dozen huge outfits, with another 5-10 midsize organizations all working towards expansion. No matter what type of lifting is at play, who the judges are, and/or who leads the federations, they all looked up to Louie Simmons. Some would readily admit it and with others it might take a little more conversation, but anyone who was real about powerlifting, had to admit his contributions were critical. And seeing him, as I did many times, at the Arnold Classic and other fitness expos, I saw how people were around him and how they treated him.

I remember several Arnolds where he didn’t even have a booth that said who he was. It’s almost as if they found him a card table and put it in some unclaimed part of the expo. One time, his booth (really just a little card table) was immediately behind two booths. I was just trying to find a way to break through the crowds; I had no idea someone was holding court in the tiny walkspace, but there he was, standing behind a black table, with some literature on the it, and wearing his Westside Barbell t-shirt. He must have had ten or twenty people waiting to shake his hand and take a photo with him. There were no signs, no bells & whistles, just Louie behind a card table. Imagine if he’d had one of those $100,000 booths, with the giant pop-ups, the tv screens, and a full-on gym like the Animal booths used to. In that case, the lines would have been longer than those waiting for Rich Piana or Kali Muscle. That said, that wasn’t the point. Bigger wasn’t better. Louie didn’t want everyone, he just wanted the best.

Powerlifting, Strongman, and strength sports are in a really good place. Athletes are getting big sponsorships, meets are drawing cross-sections of the fitness and mainstream communities, and demand is soaring. Bodybuilding promoters have also seen the potential; they want strength sports to be a part of physique-based sports. This creates substantially more interest, which translates to more ticket sales, raising rates on booth sales, and upward expansion into bigger and better venues. None of this would be possible without Louie Simmons. Powerlifting, as we know it today, would not exist without him. We all mourn his passing and commit to celebrating his memory for as long as we’re around. RIP, Louie!