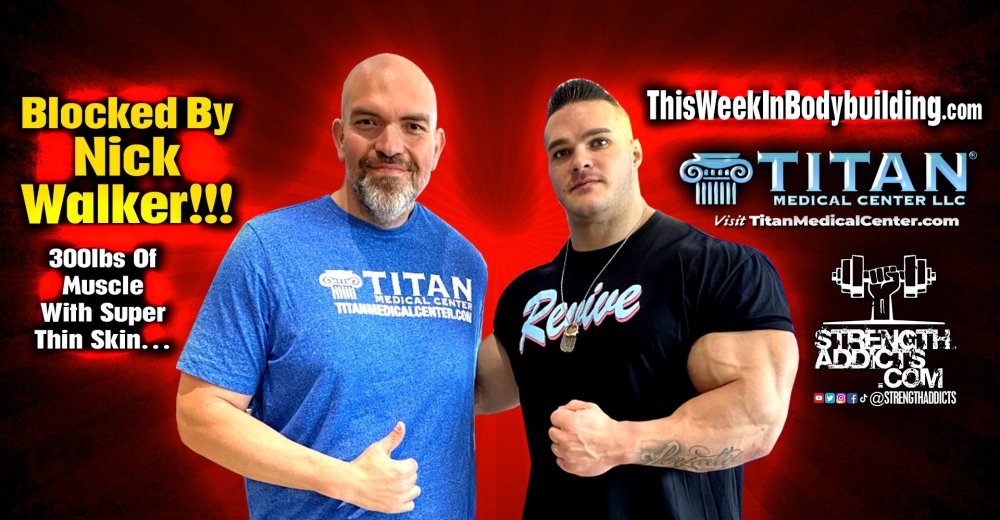 Yes, unfortunately the great Nick Walker dubbed “The Mutant” for carrying darn near 300lbs of muscle, has blocked your ole buddy Christian Duque, for being an objective journalist. In all my years covering bodybuilding, I could count the top pro’s that have blocked me on one hand. There’s Phil Heath, and there’s Nick Walker. No other top bodybuilder has ever done that. And believe you me, there’s bodybuilders that I’ve grilled, I mean really put on the spot, but none have blocked me. I have been blocked by other top bodybuilders, but many years after their best years were behind them. And even these grumpy has-beens don’t keep me blocked for long.

Take Lee Priest, for example, he not only can’t keep me blocked for long, but every so often, he’ll unblock me and like a bunch of my posts.

The fact is, you shouldn’t block the press. If you’re to be any kind of a public figure, especially a champion, you can’t tune out everyone who doesn’t blow your head up and/or people who disagree with you. To do that, creates an alternate reality, and widens the gap between the influencer and the fans.

The primary objective of social media, for example, is to bridge that gap. The more direct the links may be, the more goods and services are likely to be sold. The idea of blocking people is counterproductive to growing bodybuilding and the fitness industry.

There’s a reason why, to date, I’ve only been blocked by two top tier bodybuilders after covering the sport for darn near fifteen years. What’s interesting, is that while a lot of people came to me over the years, to empathize with my issues with Heath, many are coming out of the woodwork – just in a few days – to say the same about Nick Walker. One Florida promoter, for example, made a public comment, stating as much. I mean, when you have a promoter going on record as to say they don’t like him, you know the guy’s either misunderstood – or – an asshole.

There’s a lot of commonalities between Nick and another bodybuilder who shot to the top, not too long ago. I won’t say names, but for those of you who are faithful readers of Iron Magazine, you’ll pick up on this memory pretty quickly.

So, picture it, I was hanging with Dave Liberman at an Arnold Classic and he needed a spot (video) from a bodybuilder who was to guest pose at one of his two big contests in Cleveland. We had to wait in line at the booth, which is highly unusual. If you know the bodybuilder and you’re in the media, a promoter, or a fellow influencer, then the standard is, you cut. I know that’s kind of fucked up; why should we not wait, but you, the fans, should? I don’t really have an answer, except to say, that’s just the way it is. I just go with the flow. Anyways, the primadonna behind the booth made us wait. He barely acknowledged us.

Now mind you, Dave was there, contest posters in hand, and it was clearly obvious why he was there. It was business. In any event, the bodybuilder made us wait. It wasn’t super long, but it was a good 5-10 minutes. While it wasn’t long, it was humiliating. Dave was annoyed, as was I. Eventually, the bodybuilder waved us over, gave us a halfhearted spot, and the whole time looked like he was doing Dave a huge favor. That’s an asshole move. I wouldn’t expect much more from Nick Walker. To be fair, it’s not just because blocked me, but it’s also based on the mountain of feedback I’ve been receiving.

You can tell a lot about people based on their actions. And the fact is, just to give you an idea how petty this 300lb phenom is, my issue was with his coach. I didn’t even have a problem with Nick. His coach, Matt Jansen, voiced displeasure with my coverage of Shaun Clarida’s outrageous dismissal from RAW, but even Jansen didn’t block me. That’s because one man blocking another man on Instagram is a weak move.

When Nick took Top 5 at the O, we exchanged a couple dozen texts and audio messages on IG. I met him at the Natural Body event in Ozone Park, NY. It’s not like he couldn’t have reached out and said, “hey man, I don’t dig your coverage,” or “I disagree with you because of…” Instead, he blocks me. He blocks me knowing I run like 50 Instagram pages. Blocking one account serves no purpose, plus, he’s all over the news. Am I not going to see that? Am I suddenly going to be cut off, unable to write articles or do commentaries? I just don’t understand what blocking accomplishes, except to offend people. I totally get unfollowing someone, but blocking them?

Nick, certainly, has been through a lot in his life and I certainly respect his many achievements on stage; however, I’m not going to brush his blocking me under the rug. It sets a bad precedent and it needs to be addressed early on. Look how bad it got with Phil Heath. He used to block EVERYONE! You didn’t think he’d win? He’d block you. You didn’t think he made improvements? He’d block you. You simply liked a heckler’s comment? He’d block you. Phil Heath was the biggest man child that ever held the Mr. Olympia – and what’s worse is, he held it for seven consecutive years. Have you ever wondered why Ronnie’s and Jay’s lines were always longer than Phil’s, even when Phil was at the height of his reign? It’s because Phil was a prick. Maybe my article will resonate with the people who tell Nick what to do, or maybe he’ll read it, and do a volte-face.

Others have said that Nick runs from any negativity. I think he even told me something about me not writing anything controversial. I didn’t really get it and when he said it, he said with this sort of feeble-looking demeanor, that I just couldn’t take seriously. It was just weird. Nick said it as I approached him to say what’s up. It was almost like a conditional what-up. Lol. It’s like he had to put that warning out, like if I ever took any critical position – on anything – into infinity, then from what I gather, I ran the risk of no longer getting him to say what’s up
to me. That’s super weird.

Apparently, it also included being blocked on Instagram. I’m sorry folks, but this does NOT sound like anything out of a hardcore bodybuilding story. It’s like knitting circle bullshit. I mean, can you imagine a 300lb., shredded, vascular freak, taking the time to go around Instagram blocking people because they have opinions he deems negative?

I can’t even begin to tell you what a different perception I have of Nick Walker, now. When I saw the footage of him winning North Americans, then the NY Pro, then the Arnold and forcing his way into the Olympia Top 5, I thought this guy was the future Markus Ruhl meets Dorian Yates. I was really, really impressed. That’s why I made a point to go say hello to him at the Natural Body event. I didn’t, for the record, even talk to Chris Bumstead. Nothing against C-Bum, but I’m a Black Swan fan and I don’t go around asking random pro’s for interviews, or even photos. I’m a journalist, not a fan boy.

Although Nick didn’t have much to say, even just saying hello, and taking a photo was good enough. And when I took a critical stance of Matt Jansen, I made a point to reach out to Nick. I was considerate like that, which I never am, otherwise. If I had a critical stance of Chris Aceto, I wouldn’t DM John Jewett or Jose Raymond to make sure their feelings weren’t hurt. I must have had some inkling that Nick was far more delicate than the average bodybuilder – but there’s delicate, and then there’s this. I didn’t even insult Jansen; I just stated he didn’t do enough to protect Shaun Clarida (his client) and ensure his spot at a company he partly owned. And bam! Nick Walker blocked me. Now what I see, is a 300lb diva. He could grow into 400lbs, with 2% body fat, with 30” arms and I’d still want to call him Karen.

Pro’s who block people look weak. No matter how much muscle they carry, their insecurities undermine all of that. If you’re so soft that you can’t even scroll past posts that you don’t 100% agree with, then you’re choosing to live an extremely sheltered, alternate reality. Oh well, I said my piece. He’s young and he’s making tons of money. I highly doubt he’ll read this article, much less care what I have to say. I just would hate to see him 10yrs in, with armies of haters, no sponsors, and trying to find himself and a career in his late 30’s. To me, when I see a Mr. O go from ruling the sport to begging for personal training clients on Instagram, it shows me how little so many Pros have going for them. This is real talk, folks, you can’t compete forever, much less stay on top.

The Pro’s who are cool to the media, cool to the fans, and cool to critics, while on top, build audiences that stand the test of time. Look at my buddy, Brandon Curry. He won’t even block trolls on his Instagram Lives. He’s patient with them and he never give responds with negativity. As a result, some – not all – of these trolls start to loosen up and start finding themselves becoming fans. In one year, Curry had substantially more connections and grew bodybuilding dramatically more – than Phil Heath did in seven years! If that’s not food for thought, then I don’t know what it is.

So Nick Walker blocked me. Oh well. For fifteen years, I’ve been blocked by two top athletes. That’s very telling. I’m sure he’ll be fine; I just wish Walker won’t become driven by his many insecurities. What’s your take on jacked bodybuilders blocking journalists/fans and acting like divas on social media?