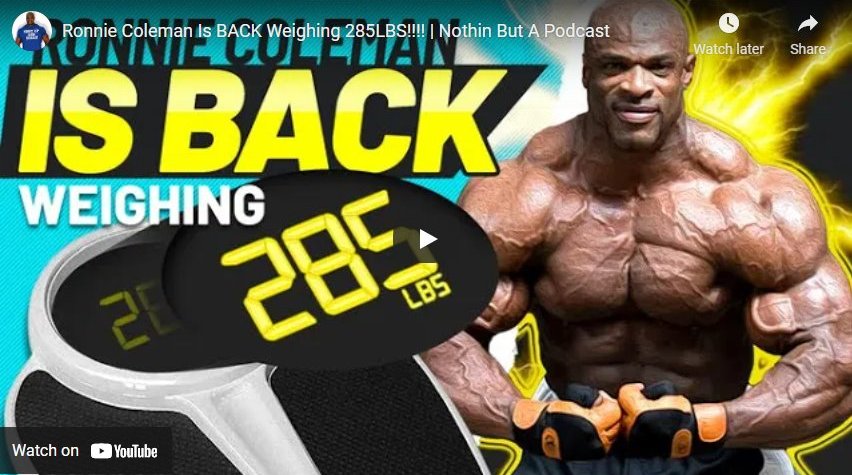 C’mon guys, are you really buying into this? I understand that as fans, especially for those of us who lived the Coleman era, there’s a nostalgia effect with The Big Nasty. It’s like believing in Santa Claus or the Easter Bunny. I’m not saying that you can’t remember The King in all his greatness, but if you believe that a guy who up until recently could barely walk, is back to 285lbs and that there’s any chance he could ever compete again, you’re bashit crazy.

And if you’re a faithful reader of Iron Magazine, I’d hate to insult your intelligence, but I certainly wasn’t the first and I probably won’t be the last. The fact of the matter is that I don’t believe the news and I doubt we’ll ever get any type of conclusive proof that will prove the story. If you were to ask me what this is all about, I’d say hype. Plain and simple.

Ronnie Coleman was one of the greatest bodybuilders that ever lived. When he was on top, no one could hold a candle to him. In ‘98 he edged out a more deserving Flex Wheeler, to win the 1998 Mr. Olympia. In 2001, though he was defeated by Jay Cutler in the prejudging, he somehow, was able to retain his title. Other years, he had the likes of Cutler and Gustavo Badell on his heels. He even lost once, while on top, at the 2002 GNC Show of Strength. But that would never happen again.

While he competed, he dominated supreme 99.9% of the time. Then in 2005, the signs started to show. What’s crazy is that in his recent documentary, Coleman admitted to being in pain his entire bodybuilding career. We didn’t know that; it simply wasn’t part of the story that was The Big Nasty.

By 2006, his run was done. If there were any doubt, he returned the next year, and got relegated to 4th. From there, it’s been back surgery after back surgery, complications, and revisions. His life has been one of extreme physical hardship, but he’s soldiered on, promoting his very successful supplement line and growing his audience exponentially.

That being said, he’s been sidelined so much that walking was the best he could hope for. It effectively denied him the one thing all retired former greats have as a fallback? No matter how boring their lives may be and no matter how out of shape some get, there’s always the bleak possibility they’ll make a comeback. This keeps some of these guys on the radar, but for those who are still in spectacular shape, guys like Kai Greene, their comeback-hype translates to direct sales. Why do you suppose they do it every year? Think about it.

If Ronnie had hinted at a comeback just two years ago, most people’s reaction would have been one of disbelief and/or downright laughter. Since he’s been in less pain and maybe is able to ambulate more or less on his own, now this talk of him going back to 285lbs comes up? Now he suddenly could make a comeback? Please.

I don’t doubt that Coleman has a ton of heart and that if anyone can face what he’s faced and still lift, it’s him. But to say he’s back at 285lbs of lean muscle, is absurd. Is he also squatting and pulling 800lbs? Is Jimmy Hoffa his training partner?

If I were to speculate what this all boils down to, I’d say it’s probably some pathetic attempt to sell whey protein and pre-workout powder. Lemme guess, Ronnie will soon be seen covered up, doing a set of something, and then he’ll emerge from the shadows chugging his protein. While he’d never suggest that his product got him back to his prime, he could just chug, smile, and flex. Who needs words when you have that visual? Next, he might say that what got him his 23” arms back, was his King Whey Protein. It can grow your arms, fix your finances, and save your marriage. That’s how good this whey is, baby, get you a tub, today!! Oh Yeah!!

I feel like I’ve lost brain cells writing this article, but I’ve actually received DM’s over this. There are people who actually wanted to read an article from me on this matter. I understand that Nick Trigili made a video about this, but if you could read between the lines, you’d know that while he was trying his hardest at being impartial and objective on air, he didn’t believe this crap, one bit.

Other outlets also ran with the story.

Look, I’m not faulting them for doing so. Anything that an 8x Mr. Olympia says, is by its very nature, newsworthy. It’s not like Ronnie makes a lot of public statements and after the excruciating pain that his fans have seen him endure, a statement like this, is bound to make headlines. The problem is, no one wants to point to the obvious.

Merely asking the question and not demanding more, allows for the fans to take this (likely) clickbait fake news and run with it. What happens next is a snowball effect. Before you know it, it’s the talk of the message boards, Facebook groups, and then the channels will get a hold of it. Now, once it’s at the networks-level, that’s where it gets interesting.

The outlets that want the truth, will likely ask for a lot more evidence, like I’m doing here, at Iron Magazine. The outlets that have literally nothing going on, particularly during the window between the Olympia and the Arnold, may in fact take the bait. They might have 6-12 shows that speculate as to what if Ronnie was at 285, could he compete again, will he do a guest posing tour, will he do workout videos? There’s endless stupid questions that could be raised. These clickbait soundbites could be used as standalone episodes, they might get tossed in for good measure on dull episodes, or they might be used to poll their audience through interactive tools like IG or FB stories. If the outlets make enough noise, maybe RCSS buys advertising? I don’t know; maybe it could happen and maybe not. Pages love ad money and companies love good expenses that generate ROI.

The idea of Ronnie pumping iron again is going to sell big. Like King Midas, anything a jacked Ronnie touches, will turn into gold.

Could he be 285, shredded? Sure. Is he? I don’t know, but I’ll need a lot more than his words, to believe. He’s never been a dishonest person and I have always thought highly of him, but there’s things that just make no sense and the fact he owns a supplement company, means he could sink to all time lows to keep it afloat. Afterall, when you have a business, especially one that’s your namesake, your #1 duty to ensure that that business remains profitable. If it fails, not only do you lose your money, but think about the huge hit it would take on your legacy.

There’s a lot on the line and like I said, the comeback/getting back in shape angle that all the former greats use, has been something Coleman hasn’t been able to rely on. Maybe he wants some of that Kai Greene smoke. He’ll be back in the headlines, maybe he’ll somehow grab a special invite (though never actually compete), and maybe he might even be able to put out a dvd. Of course, it would require a ton of takes, clips, editing software and lights galore, but who wouldn’t buy that digital download? I won’t lie, I’d buy it for $9.99, $19.99, or even $29.99. I don’t mind admitting to that; however, I’d know what I was buying. I wouldn’t, even for a second, believe that was reality.

Right now, there’s a lot of people – I mean A LOT OF PEOPLE – who are contemplating the return of The Big Nasty and how he’d fare against Big Ramy at the 2022 Mr. Olympia in Las Vegas, NV.

And folks…, if you think the people running this bullshit scenario through their heads, live in caves and just discovered fire, you’d be wrong. There’s plenty of lawyers, doctors, and engineers who might be geniuses in their careers, but lack basic common sense in the fitness industry. It happens ALL the time.

I’m sure I’ll get some hate mail for this article. How dare I question Ronnie?!?! Well, I dare. I’m guilty as charged and what did you think I was going to write about when asked so much? Please, people, get real. Until we see Coleman look the part and jump on a scale and it read 285, please don’t buy into the hype. Imagine how foolish you’ll sound talking to your friends about a possible Coleman comeback in 2022. Don’t do that to yourself. People might start thinking about you relocating to a padded cell. Still, I’m curious what your take is? I look forward to reading your feedback in the comments.