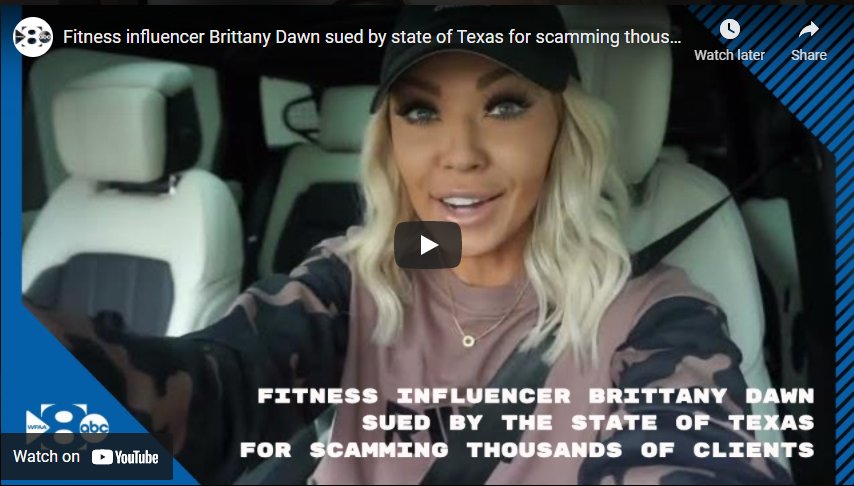 If you follow any of my content, the name Brittany Dawn should ring a bell. Back in 2019, I wrote a couple of different articles about her and the shady things she’s been doing in the industry.

Honestly, I completely forgot about her following the content I provided, mainly because she never brought any value to our industry and has done more harm than good. Those types of people don’t deserve to be remembered or concerned about. Everyone in the fitness industry just wanted her to go away. She is everything wrong in our industry.

Let me give you a little refresher as to what has taken place and how we’ve come to where we are today with the state of Texas suing Brittany Dawn.

*Disclaimer: Since no one can trust Brittany Dawn, it should be noted that not only is everything found in this article already published in the media, but the additional commentary on what’s going on are my opinions on the situation.

A few years ago, Brittany Dawn made YouTube content about health, fitness, and nutrition. Little did anyone know, she had zero educational background to be talking about anything related. Not only does she not have any sort of college degree that would back her nutrition or exercise content, but she’s not even certified. That would be like me talking about building a space shuttle and only having a base knowledge at the surface level.

Well, Brittany Dawn decided she would start online coaching and capitalize on her (then) 500k+ following on Instagram. Girls from all over the nation signed up for her “personalized” training and nutrition programs. What they received was a cookie-cutter set of plans that she apparently sent to everyone (with little if not zero customization).

Things went down an even darker rabbit hole when Brittany Dawn started talking about eating disorders and insinuating that she overcame her own and can help other women (again, she has ZERO education on the topic to be helping and prescribing ways for women to overcome eating disorders).

Well, eventually, she was called out online for charging up to $300 for her plans and sending the same thing out to every woman who signed up. She wouldn’t get back to these women when they reached out with questions, and then her “business” fell apart, and the Texas AG got involved.

Brittany Dawn allegedly “refunded” the women who wanted to get their money back, but as we later found out, she refunded the money on PayPal and then canceled the refund so that many women never got their full refund. In addition, women could only get a refund if they signed a nondisclosure agreement (which was later dropped due to, once again, being called out online).

I mean, it’s hard not to want to see Brittany Dawn called out and face legal action when she knowingly and willfully ripped women off. And now, the state of Texas put the gloves on and are ready to step in the ring and take action.

Oh, and I almost forgot the part that should have rubbed every client of hers the wrong way… she CHARGED SHIPPING FEES to deliver the plan electronically to her client’s email. (No, you can’t even make this up)

The Texas AG Has Seen and Heart Enough

The complaints about Brittany Dawn and her scam of a business model stirred up quite a long list of complaints. According to several online media channels, Texas is suing Brittany Dawn for giving people eating disorders due to her bad health advice. I mean, anyone with half a brain could see that Brittany had no idea what she was talking about. I feel bad for all the victims who were taken advantage of due to her large following and people wanting to believe the things she says are true.

Once the bad press hit the news about Brittany Dawn, all of a sudden, she changed her image and profile into a “Christian influencer.” Anyone could have seen that one coming.

What do most psychopaths do when they are caught? They shift the attention to God and religion — it’s actually quite disgusting, the attempt to rebrand in such a way to save face and act like you’re a good person. According to her Instagram bio, she’s a “Jesus seeker” and “Kingdom chaser.” Yeah, she could definitely use some Jesus in her life to forgive her for ripping off women across the nation and taking their money.

She probably thought she was off the hook for her past scam, and everyone moved on. Then Attorney General Ken Paxton saw enough and said, “Hold my beer,” and decided to finally take action.

What I believe pushed this case over the edge is the fact that several women told Brittany Dawn that they had poor body image, were underweight, had an eating disorder, and needed help. What did Brittany Dawn provide to these women? A plan that included cardio and an extremely low-calorie diet (which would induce further weight loss). It goes to show that Brittany Dawn has no idea what she’s doing, probably found a template online, took that, and sent it out to everyone thinking she could get away with it.

There was no personalization. In fact, providing women with a plan to lose weight when they are underweight to begin with shows that Brittany Dawn has NO IDEA what she’s doing and by being incompetent, can do a lot of damage to the health of her clients.

I’m glad the Texas AG stepped in and is suing her. She deserves all the bad press she’s getting, and I hope they drain her bank account to nearly nothing after the scam she pulled, taking advantage of women who truly needed help. According to documents, the suit seeks up to $10,000 in damages for each violation (and I’m sure there are a ton in question).

It will be interesting to see the outcome of the case, and I hope the Texas AG goes hard on her for her actions. I don’t believe for one second that Brittany Dawn has changed and “found Jesus.” I look at this as another scam to cover up her past and make people think she’s a good person, which will be hard to convince anyone according to her past.