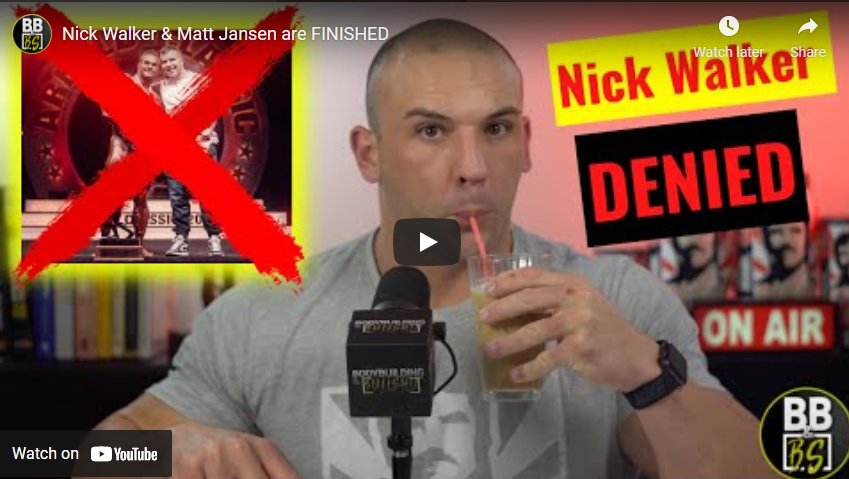 The word is, Nick Walker went on record to say that a lot of what people heard was true, that he spoke with the main guy at RAW, that he’s staying put with them and riding it out with coach, Matt Jansen.

What exactly was true? He didn’t specify. What was discussed with the RAW shotcaller? That wasn’t disclosed, either. So what I’m going to do, is speculate. I’m going to speculate based on what I think transpired, based on the information that’s available. If I’m wrong, I would invite Walker (who blocked me on IG), Jansen, or anyone from RAW to either send me a clarification or publicly refute my insights. The end result would, at least, offer some clarity. Here’s what I’m basing article on:

It would seem that Walker failed miserably at his attempt to play hardball. If, in fact, the star athlete tried to lay down the law with his guru, the tables must have quickly turned awfully quickly.

The fact is, the athlete has no leverage in a situation that’s become all too common in the fitness industry. This is the case when the competitor’s main sponsorship is conditional on something else. Some athletes have deals with a supplement store and a supplement company – or – a coach/owner and his supplement company. If one deal ends, they all end. This is the case with a great many athletes in the fitness industry. There is no future, unless all conditions are met. So in Walker’s case, if he left Jansen, not only would he be without a coach, he’d also be without a main sponsor. It’s not a two way street, however.

Many athletes, today, find themselves in a similar boat. The smart move is to keep your streams of income separate. The problem, however, is anytime a competitor works with a coach who owns a supplement company, it’s expected for the athlete to go all in. Sometimes, it might even be a requirement.

I couldn’t imagine a situation where, say, Derek Lunsford would work with Hany, while remaining at Animal. I’d think that a condition of working with Rambod is that the athlete works with Evogen. Maybe I’m wrong and maybe it’s totally doable for the athlete to sign to whatever company he wants and work with whatever coach he chooses.

The fact is, when a competitor is sponsored by the same camp which coaches him, he’s really very much at their mercy. He no longer has leverage. They hold all the keys, much like Jansen/RAW pretty much own Walker. If he tried to flex his muscle, they shot him down – and good! He may be 300lbs and people may call him The Mutant, but when it comes to knowing what time it is, he’s RAW’s time.

Of course, much of what I’m saying can be denied by Walker and even Jansen/RAW, but it’s clear something happened and it’s also clear that much of what we heard is true, and that’s by Walker’s own admission. We also know that the 2021 NY Pro and Arnold Classic champion is extremely vulnerable when it comes to the future of his own career.

Prior to linking up with Matt, his career was nothing to write home about. Once the competitor and coach linked, Walker went pro in Pittsburgh, won the 3rd most important title, then the second, and got Top 5 at the Mr. Olympia. If he were to have walked away from all of that, was he ready to hit the ground running? Did he have contingencies in place? Did he have other offers on the table? Because from where I’m sitting, it looked like he was training at random gyms, posting random social media content, and no key announcements were made. In fact, many thought he was moving back home. That almost looks like a retreat in the court of public opinion.

When you’re at this level, the last thing you do is try to win the game with a poor hand. I don’t care how great of a poker face you may have, you can rest assured, the big boys will call your bluff. And if you have nothing set in motion, you’re done for. Even if Walker had done minimal planning, he could have done the fake-it-till-you-make-it thing, but the fact is, he was totally lost.

If I’m right, Walker met with the top dog at RAW, and his position was anything but commanding. In fact, I wouldn’t be surprised if Nick started looking at the big picture, at the prospect of finding a new coach, landing a new sponsor, and not wanting any of that crap as he prepared to do the biggest show in bodybuilding this December. There’s also talk he wants to do the Arnold Classic. That’s two months away!! And the idea of him self-prepping – is preposterous.

Put yourself in the shoes of a major supplement company CEO. Let’s say you had a $100k to play with and you wanted to sign someone like Nick Walker. He’s got the titles and the physique, but he owes both to the winning team that is Jansen/Walker. Now, you have a guy with a super impressive resume, without the coach who got him into that winning mindset, who was able to push him hard in terms of mass and condition, who knows how his body reacts to various elements (e.g. fats, carbs, water, gear, rest, stress, exhaustion). Now this rising superstar is all alone, arguably, lost. Are you going to sign him, hoping he’ll find the perfect new coach, and take off from where he left off last year in Orlando, FL?

If you thought like that, it would be a mystery how your company was still afloat. That’s a lot off what-if’s and I can’t see someone like Robert Dimaggio of Iron Mag Labs or Chris Mackenzie of BPI or Jason Theobold of Nugenix taking such a massive gamble (or blunder). Even if I had the kind of money necessary to sign someone on Walker’s level to a company I owned, I’d probably opt to sign 1-4 mid-level athletes as opposed to signing someone with such a high likelihood of failure (w/o Jansen) as him.

Take Mr. Olympia Big Ramy. How many coaches did he run through, some without even preparing him for a contest, before he settled on Chad?

You have to realize that while Walker commands the big money, who’s the sucker that’s going to bankroll him while he’s going through the failed preps and crummy placings till he finds his way after breaking from Jansen/RAW? If, in fact, he does find his way. It’s not a guarantee, folks.

Moreover, I would not be one bit surprised if all of these what-if’s suddenly hit Walker like a ton of bricks. I would also not be surprised if he actually agreed to stay on for less than what he had before his ultimatum. Then again, I might be totally wrong, and maybe the main guy at RAW was the one who convened the sit down, maybe he was the one begging Walker to stay, and maybe Matt Jansen couldn’t bear an existence without Walker as a client. Maybe Walker got everything he wanted because he’s just that shrewd of a negotiator and visionary. And maybe the moon is made of green cheese.

Look folks, this is all speculation, but one thing that is as factual as me being bald, is to have as many streams of income that are independent of each other as possible. As the old saying goes, don’t put all your eggs in one basket and – IF – you’re going to draw a line in the sand, have back-ups in place.

I know pro’s who were so on the ball, the second the news broke that they’d left their old sponsor, the new one was already dropping ads and products with their names and faces all over them. That’s what you do when you’re on the ball. When everything just happens, all precisely at the right time, when it looks like luck is 100% on your side, it’s because everything was planned months in advance. No one is that lucky! It’s the product of Plan B’s, contingencies, and cause and effect.

If I’m right, Nick Walker got the reality check of his life. He’ll be at RAW and with Jansen for as long as they want him. When he’s no longer of use to them, he’ll be out on the curb.

What’s your take? What do you think happened?