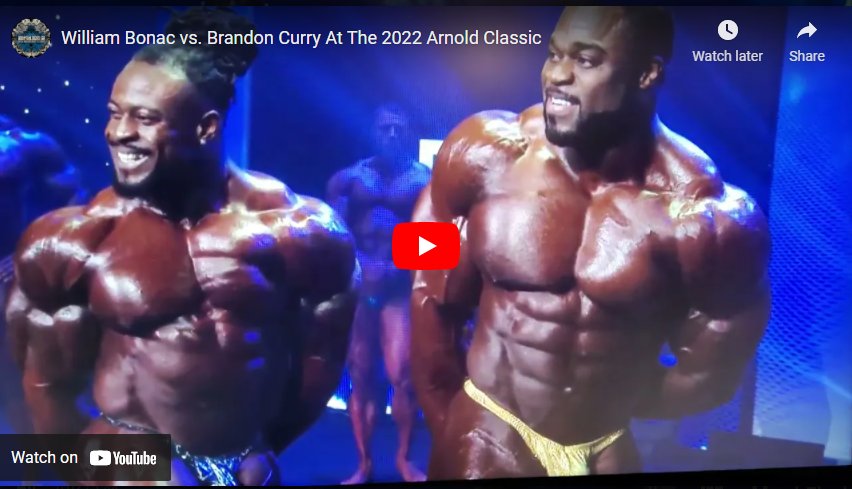 Just as predicted, here, at Iron Magazine, by yours truly, the 2022 Arnold Classic was a 2-man battle. It was between Brandon Curry and William Bonac, and then, everybody else. For all the noise made about Dauda and Wilkin, it all evaporated as soon as The Prodigy and The Conqueror took the stage. That’s not hate, it’s straight-up facts. Even the Kingsnake, Steve Kuclo, who’s always been ultra-competitive, particularly in Columbus, he too was overpowered by the frontrunners for the title. Interestingly, the show was the smallest it’s been in years.

Some guys bailed because of the pandemic, others because of injuries, but I also think competitors were scared of competing with Curry and Bonac. That’s right, I said it, they were afraid of Bonac and Curry, and they had reason to be, but we’ll get to that more further along in the article. Still, fear aside, 9 total guys was a bit disappointing.

Usually the prospect of earning $200,000 in two days, plus having the bragging rights of winning the second biggest bodybuilding contest in the world, would be enough to spark the interest of some of the biggest names in the sport. I mean, there’s still a number of contests paying as little as $10k for the top spot. If you compete at the Masters Pro level, for example, you could actually take a measly $3,000 for a win. Could you imagine that? Sixteen weeks of prep, paying for flights, coaches, food and supps, and walking away with a few thousand dollars? You might be winning on paper, but your wallet takes a huge hit in the process – and that’s for the winner! Imagine the poor guys that take 2nd, 3rd or place 5th or 6th. They might not even make enough to cover the Uber to and from the airport. With lowball shows like that, you’d think everyone would be racing to the Arnold, but this year’s ASC had a couple of guys who had something to prove. They were both coming at 110% and a lot of guys probably didn’t want to show up. Curry was robbed at 2021 Olympia, meanwhile Bonac was ignored; they were coming to Columbus, all systems go!

What could Brandon Curry want to prove? He’s won the Arnold before, and more importantly, he’s won the Mr. Olympia. Both of these statements may be true, but Curry narrowly lost the Olympia in ‘20 and was totally robbed in 2021. Not only hasn’t he been able to win the Sandow back – for whatever reason – he’s been largely overshadowed in promotions. Unlike previous Mr. Olympias who actively competed, Curry has stopped being treated as a major threat, often being relegated to lesser promo than guys like Hadi Choopan and even young guns like Nick Walker and Hunter Labrada. Brandon is a soft-spoken, gentleman. He’s not going to lash out. He’s got his titles, his company (015 Nutrition with Marc Lobliner), his gyms (Carbon Culture), and various deals in and out of the fitness industry. Nonetheless, everyone has a breaking point. Imagine bringing your absolute best – and still – getting overlooked!!

After the 2021 Olympia, I think Big Ramy was made invincible and that’s not because he’s all that good, just because. Let’s leave that there because all it’s going to do is cause trouble and it’s not going to change anything. That being said, I think Brandon wanted to bring his best to the Arnold to show what he’s capable of. It’s bittersweet because Ramy wasn’t going to be there, but William would be. Although these two guys have had many hard fought battles and 2022 surely wouldn’t be a cakewalk, the victor was always deserving. Ramy looked like trash at the 2021 O, but still kept his title. That said, the Arnold was going to be an all out war – everyone was coming for the money and the respect! But as soon as Brandon hit the stage in Columbus, however, he was one of two men in the running to win everything. It was that apparent.

Another guy, who undoubtedly, had something to prove was 2x Arnold Classic champion and Mr. Olympia runner-up William Bonac. Again, what would he have to prove, you say? Perhaps tying Jay Cutler’s run? And maybe, but more importantly, to be considered a top contender for the Olympia. For years, he’s been completely ignored without any rhyme or reason as to why.. Even the year he won the Arnold, dusting both Dexter and Ramy, he was relegated to second class promo for that year’s Olympia. Not only wasn’t he treated like the true #1 contender, he wasn’t treated like a factor at all.

It was only after I had my graphic designer make a graphic and after I wrote a series of articles at Iron Magazine that he started to get some notice from bodybuilding outlets. Am I taking credit? Yes, to a certain degree, I am.

If you only knew the kind of numbers Iron Magazine gets, you’d understand what I’m saying. We don’t feel the need nor the purpose in publishing circulation numbers, but rest assured, these articles make the rounds and when you have me pointing out some pretty stark realities, people tend to make things right. After all, that’s the power journalists wield. We don’t just report the news, we give our two cents, and while we don’t have direct power, we have an undeniable impact on public opinion and on decision makers.

That said, William has been routinely done wrong at the Superbowl of Bodybuilding. It’s not personal, it’s just the subjective nature of the sport. I mean, what else could it be? Much like Curry, Bonac is not the type to lash out on social media, go to dramatic programs and whine, or display poor sportsmanship – on or offstage. That said, much like I speculated in prior IM articles, I think William must have come to the conclusion that no matter what he brought to the O, he was just not going to get the placings he deserved; therefore, I suspect he may have put more work into his 2022 Arnold prep, than his 2021 Olympia one. Again, the title itself wouldn’t have been the redemption sought, more so, bringing his best and getting placed accordingly would have been the motivation. Taking a razor sharp 2nd, reminded the world that The Conqueror is very much a top contender to be the best in the world!

I think my theory was proven with what Bonac said upon taking 2nd. He said something to the effect of “my God what must I do.” I totally understand and emphasize his level of consternation. For Bonac, who won in 2020 and was unable to compete in Columbus in 2021 due to travel issues, 2022 was probably the year he would have tied guys like Jay and Kevin Levrone. Losing to Brandon, could hardly be called losing. Yes, he took 2nd, but he was in the fight for first down to the wire. It really could have gone either way. It was just that close. Both men were pushing at 110%, both men had different looks, but only one man could emerge the winner. Brandon was that man and took the $200,000 award. William took a super close 2nd, with $120,000 in winnings.

These guys are both consummate professionals, friends, and true ambassadors for the sport. I have no doubt in my mind that William could beat Brandon and/or that Brandon could beat Bonac again. That’s how good these two guys are. I also have no doubt that Brandon and/or William could EASILY beat Ramy, if… Well, let’s just say I have no doubts they could beat Ramy. They both have in the past, but who’s to say they will in the future? If we’re talking muscle, condition, and posing, they can most definitely do so. If we’re talking reality and the way the Olympia has played out for The Egyptian Phenom since he’s won, I’d say God couldn’t beat him, but who knows.

I could totally see Brandon and William doing a rematch in Columbus in 2023; however, I don’t see it happening at the O. I think William will continue to get the cold shoulder and I honestly don’t know that Brandon will see more publicity than he already has in the past. I love the folks who run the O, but I bet you if Flex Lewis gets the special invite, he will get more press than Brandon. Hadi will probably get more press than Brandon, as well. Heck, Nick Walker and Hunter might beat him out in the promos, too!. Even though Brandon was 2nd last year and won the Arnold this year, that would have made him the uncontested #1 contender during the 90’s, 2000’s, and the past decade, but in 2022, he’ll be second fiddle to the guys with more hype. Who creates and/or controls that hype? The media and the social media influencers. The same influencers who asserted that Brett Wilkin was going to “wipe the floor” with Curry and Bonac. And where did The Butcher end up placing? Exactly.

In any event, I think bodybuilding fans were in for the treat of their lives, seeing Brandon Curry and William Bonac battle this past ASC! Both guys are super competitive and after the 2022 Arnold, neither guy can easily beat the other. This was never in question in the past and it’s certainly not in question in the present. When I say it was razor-close, it was razor close. This battle is unlike anything we’ve seen since the late, great Shawn “Flexatron” Rhoden toppled Phil Heath in his quest for #8 or when Jay Cutler bested The Big Nasty, Ronnie Coleman. That’s how great of a contest the 2022 Arnold Classic was!! Great job, gentlemen!! And you, two, are the BEST IN BODYBUILDING, even if neither of you is the reigning Mr. Olympia.