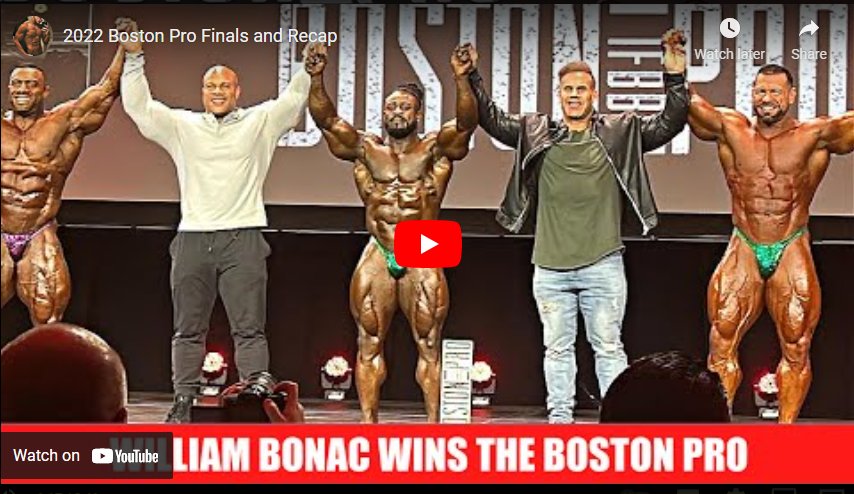 The Conqueror went to Columbus last week and nearly won the second biggest contest in the IFBB Pro League calendar, pushing Mr. Olympia Brandon Curry down to the wire; he hit the stage in Boston a week later and absolutely dominated that show. He pulverized the competition and this was no easy feat. You had guys like Steve Kuclo, Justin Rodriguez, Samson Dauda, and legendary Jamaican bodybuilder Phil Clahar. That said, I think getting the runner-up spot in Columbus, lit a fire under William.

A great many people thought he won the Arnold, but there were also some unusual commentaries made during the course of the last week. There was talk of distention and other issues, which perhaps means I need to get my eyesight checked, because I can’t understand how someone that looked as good as William did in Columbus, could have as many critiques as he did over the course of the last few days Post-ASC.

I think Bonac looked absolutely amazing in Columbus (from the photos and videos online); however, there was no question he was the winner in Boston. The big question now, is what’s next, will he compete more or will he give his body a rest, start booking appearances, and eventually hunker down for his Olympia prep?

Also, what are his chances of moving back to the higher level of the Top 6 in Vegas? Over the course of the last two years, we’ve seen The Conqueror moved down from 5th to 6th. Hopefully these are just coincidences; I simply can’t imagine William outside the Top 6, especially in a year where he took a close 2nd at the Arnold Classic and then won a major title in one of the most hardcore bodybuilding regions of the country. Let’s not forget Boston’s proximity to New York and the unquestionably hardcore New England scene. Some of the most respected bodybuilders of the 80’s, 90’s, and 2000’s emerged from here, most notably, 4x Mr. Olympia Jay Cutler!

I like to think William is a well-liked guy, but there’s been a lot of unusual comments made following his very impressive work at the ASC just about a week ago. I’ve heard pundits tear his physique to pieces, saying he lacked condition, had issues with gyno, and others saying that he needed to put on more size. Someone actually said that. More size? Are you kidding me? If he was any fuller, he’d blow up!

For all the talk that’s circulated on the message boards, Facebook groups, and from the talking heads, how much sense did it make, when The Conqueror went to Boston and wiped the floor with the competition a week after allegedly looking so off? Again, that was a tough lineup. Kuclo, alone, is a guy who could have won the whole show; he looked very good, but not good enough to hang with William. That said, it’s interesting just how many people don’t like Bonac. Why? Who the hell knows, but for a guy who doesn’t trash-talk and keeps to himself, it’s concerning, to say the least.

In my mind, Bonac is a guy who could win the Olympia in just nine months’ time. I don’t consider Big Ramy being the best in the world. I think his victory over Brandon in 2021 was a travesty. The guy looked like garbage, was holding water, his wheels looked awful and he made zero improvements from 2020. If the judges want to give the Sandow to a snowman, that’s on them, but I’m certainly not going to follow their lead. Brandon is the best and William nearly beat him in Columbus; therefore, in my eyes, William has a legitimate shot at being Mr. Olympia. The question is, how much bullshit can one man take?

For the last two Olympias – for whatever reason – The Conqueror got very little media fanfare. He wasn’t featured on the main poster and he didn’t get his own graphic until very late in the promotional run. Perhaps the marketing department doesn’t think that one of the most decorated pro’s to hit the stage can actually sell tickets, but I’d say it’s a safe bet that he does. People are used to seeing William up there, battling against Phil, the late great Shawn Rhoden and Brandon. He’s battled Dexter, he even stopped Ramy at the 2020 ASC! He’s a really big deal!! This is why the guy doesn’t get embroiled in online dramas – he doesn’t need to do that to be relevant. He makes himself noteworthy through the physique he’s built, how hard he works the stage, and what a great sport he is.

If you were to poll competitors as to which guys are held in the highest regard, you’d see folks give guys like William and Brandon the highest marks. Good sportsmanship is key, especially, in a sport that’s based on subjective criteria. It’s very easy for guys’ frustrations to get the best of them and for that anger to be misdirected against their peers. This is usually how feuds break out and from there it’s a downward spiral of negativity. With the exception of putting a major troll (Luimarco) in his place and a few words here or there with Shawn Ray one year, William has had zero issues with anyone for his whole career. And you all know I love Sugar Shawn Ray, but everyone fights with him (Lol, Love ya bro!).

The point is, for a career as long as William’s and for as hard as he’s worked to be a consummate professional, it saddens me to hear people try to tear him down, but it happens. And the people I’m, mainly, referring to, don’t go to shows, maybe don’t even follow bodybuilding. It’s just upsetting. I’d call them trolls, but that may be a bit too over the top. Contrary to what many of my critics think, I’m not a fanboy. Am I a hardcore Bonac fan? YES! But I’m still objective. I won’t call Bonac’s critics trolls, but a lot of them aren’t too far from it, either.

And here’s the thing. Everyone assumes Bonac HAS to stop competing now. Everyone assumes he has to hunker down and do the business of bodybuilding (appearances, sponsor work, new projects) but no more shows until the O. That said, what’s his incentive to do the Olympia? If the trend of the last couple years continues, he may be outside the Top 6. As shocking as that sounds, here’s a guy who had every right to be in the Top 3 in 2020 and 2021, but last year, they put Hunter and Nick (KIDS!) above him. They put rookies in better spots than him. I mean, you’re talking about a 2x ASC champ and Mr. Olympia runner-up taking the backseat to two competitors who are so new the ink wasn’t even dry on their pro cards. And listen folks, Nick Walker can talk all he wants on his Instagram about how he would have won the 2022 Arnold, but I’ll tell you what, if William had hit the stage in 2021 in Columbus, Walker would never have won that title. NEVER!

So why should William stop competing? I’m not so sure he’ll even want to do the Olympia at this point. What’s in it for him? He could easily do 1, 2, maybe 3 more shows and make more money, collectively, than eating 5th, 6th, or 7th place at the Olympia. I mean he just made $150,000 in Columbus and won another check in Boston. He hasn’t seen that kind of money from the Olympia in 3 or 4 years. From a business standpoint, I don’t know that it even makes sense for him to push his physique to the limit just to be ignored publicity-wise and then take a placing which is far less than what he deserves at the O.

Of course, as a fan, I want to see The Conqueror on the biggest stage in the sport. I also want to see The Prodigy up there. Before his passing, Rhoden was my favorite, along with Curry and Bonac. We lost Flexatron, but we still have two amazing champions in Brandon and William. The problem is, both of these guys could dust Ramy, but will the judges ever score them accordingly?

No one can tell me that Ramy beat Brandon last year. And honestly guys, who would ever score Hunter or Nick over William? C’mon! Are we talking bodybuilding here – or – are we bullshitting? Sure, having the new guard seemingly pounding on the door is great for marketing, but that’s not reality. If William got one tenth the love that Hadi Choopan gets, he would probably feel like he’s wanted there. It both upsets me and breaks my heart that a champion on his level could compete or not, and the powers that be would be indifferent about it. That’s not how you treat a champion on this level! He should be courted and his presence should be appreciated.

Who knows, maybe 2022 will be different. I’m surprisingly optimistic because I think the jig is up. I have interacted with so many people, including really big names in our sport, that were dumbfounded by the 2021 Olympia decision, that maybe 2022 will get it right. If Brandon comes back again, dominating Ramy like he did in 2021, and if he’s still relegated to 2nd, then bodybuilding will start looking like boxing. And that’s not a good thing. It’s actually quite a bad look. I think Ramy’s reign will be cut short because if he could win looking like trash last year, what possible motivation could he have to bring his absolute best look in 2022? I suspect he’ll look the same, but guys like Brandon and/or William might really step it up more, and they may take the title.

William Bonac has as much of a shot of being Mr. Olympia in 2022 as does Brandon Curry does. What separates these two men, when they’re both on, when they’re both 100%, is simply which look is sought. There’s no ties in bodybuilding, but if there were such a thing, these guys would tie a lot. It’s like this past Arnold, it was fullness vs condition, it was apples and oranges at its core. Neither guy was better than the other, they were the best at each individual look. Anyone who thinks Brandon can win the O, must recognize that William can, too. Could Hunter or Walker do it in 2022? Hell No! And if you say yes, then in the words of the GOAT, you’re prolly smoking crack.