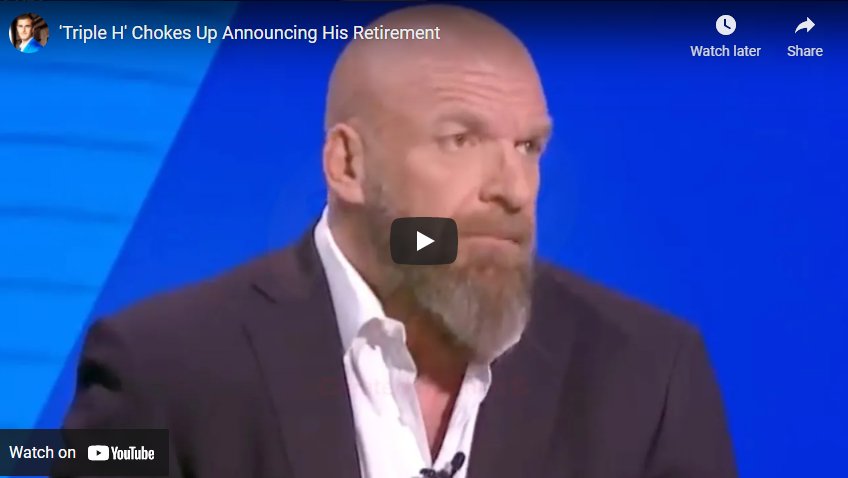 When the news hit the press that legendary WWE wrestler Paul Michael Levesque, aka Triple H, was retiring, it sent shockwaves throughout the mainstream media. It also created a huge response in the fitness community because of the icon’s undeniable links to bodybuilding. The fact is, many wrestlers and mainstream sports figures have taken to physique-based sports, including Triple H, The Rock, Shaq and others.

But there’s something about wrestling. Maybe it has to do with Vince McMahon’s short-lived but revolutionary WBF in the early 1990’s or maybe it’s because wrestlers look like bodybuilders and they know what it takes to build a winning physique, grow muscle, and keep the body young, even as it ages and gets beaten up. The fact is, there’s a lot of overlap between bodybuilding and wrestling. There’s also a lot of entertainment in both – only one seems to be paved in gold, while the other seems condemned to perpetual niche status. That said, Triple H took the plunge years ago, making himself a known player in the muscle world. His friendship with RX Muscle’s Dave Palumbo is a matter of record, he emceed the Mr. Olympia turning countless wrestling fans to bodybuilding, and his many appearances on fitness programs, further cemented his position in our industry. In many real ways, TH created an air of invincibility. That said, when the superstar let it be known that he had overcome heart issues, a viral infection, and had a defribulator, he decided it was time to put an end to his in-ring wrestling career. I’m sure this was no easy decision to make, but one that shows us all what really matters.

Very few champions want to retire in their heyday. While Levesque isn’t a spring chicken, had his health been in perfect check, he could have easily gone on wrestling at top cards 5, 10, maybe 15 more years without any issue. Look at guys like Flair, Savage, or especially Hogan. They kept going for years, seeing countless generations through. They made tons of money for themselves, not to mention for the WWE.

And in the case of Triple H, he wears multiple hats. He’s not just a wrestler, but he’s also a key federation executive. He makes money on both fronts and he’s in a position to see the bigger picture. Further to that, I’m sure he’s also seen quite a few top wrestlers who didn’t see the writing on the wall. I’m sure he knows of guys who pushed themselves beyond the telltale signs their bodies were trying to give them. Some may have been able to do so unscathed, while others, perhaps not so much. The fact is, wrestling with a defibrillator is like playing Russian roulette every night. Can it be done? Of course it can be, but why? What does someone on Triple H’s level have to achieve? He’s had the titles, he’s sold out arenas, and he’s been the center of the sport. He’s been there, done that. The difference, now, is that he put his health at the top.

It will undoubtedly cost him money, but money can be made. Once your health is compromised, the harm can’t always be undone. He also makes boo koo bucks through other appearances. Let’s be clear, here. He’s retiring from in-ring matches, but that doesn’t mean he couldn’t clock someone as a manager, trip someone, or blind them with a powder when they’re not looking. Let’s not forget the undeniable entertainment factor in professional (televised) wrestling. He’ll still be in the mix, he’ll still be able to trash talk, and who’s going to call him out for it?

At 6’4, 255, shredded, Triple H will always look like a tower of power, with ironclad resolve, ready to decemate anyone foolish enough to try to intimidate him. That, alone, provides for endless scripts where he can still make his presence known and keep the programming exciting, without putting his body through countless beatings, multiple times a year. This is something the fans really need to try to wrap their heads around.

Some just don’t get it. While wrestling is staged and the winners are decided before the matches – arguably – that doesn’t mean the taxing effects on the wrestlers’ bodies are anything but real. When a person is body slammed, over and over again, that’s going to take a toll. All the running, ducking, and jumping has effects on the heartrate, the nervous system, tendons, discs – the works!!

No matter how great the gear may be, no matter how much you eat, how much you rest or how great the chiro and massages afterwards may be, the likelihood of injury is ever present. And in the end, the decision to retire or press on, despite the risks, falls squarely on the athlete. It’s a lot of responsibility and many guys make the wrong decision, because they’re scared to turn the page, to start a new chapter of their career. We know of countless bodybuilders, legends, who could have done things differently, but they just pushed and pushed and pushed. There’s nothing hardcore about that.

Although the fans may be disappointed to see one of their favorites wrestlers retire, they should commend his decision at the same time. I think this will also make it easier for other top stars, some of which are also in their 40’s and beyond, to rethink their plans for the future. While age is just a number, it shouldn’t be totally ignored. If an athlete needs to take their heath more seriously – or – if they’re more susceptible to injury, these are considerations that need to be taken into account. Anything short of that, does a disservice to the person. This is something that adherents of all sports and disciplines should take to heart.

With regards to the future, I think it’s also important to recognize that major sports stars have a lot of options for the future. You take someone like Triple H, the Rock, or Shaq, just to name a few, and the possibilities are limitless. They were able to create brands out of their names and those brands don’t require them to put their health in harm’s way to preserve and/or expand it. Look at what Jay Cutler has been able to do. He hasn’t competed since 2013; however, he’s bigger than he ever has been. His brands take goods to market that, literally, fly off the shelves. Whether it’s clothing or supplements, everyone wants them. His lines at popular fitness expos, contests, and in-store appearances, dwarf those of current big names. And anytime Jay speaks on bodybuilding, people listen. He may not be as big (body wise) as he was when he ruled the sport, but he still looks damn good, he still trains, and he’s still a constant figure in the industry. No one ever says, “whatever happened to Jay,” because he’s as relevant as ever; he’s just not competing into his 40’s and beyond, desperately clinging to the past and putting his body in harm’s way. There’s plenty of guys, however, from his era and even before it, who still do. Why? Who knows. I’d argue it’s probably because they don’t have a Plan B.

Having a Plan B, or evolving, is not akin to giving up. Look at Shawn Ray, the most photographed bodybuilder in the history of FLEX Magazine. He just inked a major deal with Mutant Nutrition and he hasn’t competed since the early 2000’s. Since then, he’s evolved as a journalist, emcee, editor in chief and motivational speaker. Could he have dragged out his competitive days by 5 or 10 years? Sure, but he knew it was time for him to move on, like Triple H knows it’s time for him as well. Moving on and transitioning takes guts, but it’s the right thing to do. The fame will only grow, as will the opportunities.

I’d like to commend the guys who had the gumption to know when it was time to change course. And to those who are contemplating it, put yourself and your health first. Kudos to Triple H for being a role model to the fans, but also to countless professional athletes who may need a little motivation to doing right for themselves.