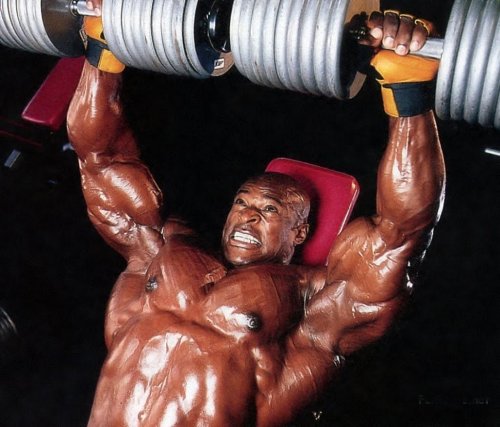 Taking the first step into the world of bodybuilding can be a daunting experience. We are confronted with a variety of new and sometimes odd-sounding practices that we are taught form the foundation of a successful weight training program. One of the first things we are introduced to is the repetition; the basic building block of the training experience itself. The concept seems simple enough–lift a weight one time through both the positive and negative range of motion. String a bunch of these together and we have a set. Perform multiple sets and we have a workout.

The rep is such a rudimentary part of the weight training process that most people give very little thought to its performance. However, this is a mistake, as it is the rep itself which is responsible for stimulating muscle growth. Therefore, its optimal performance is crucial if maximum progress is desired, but this is where the conflict lies.

For years we have been taught that if we want to extract maximum benefit from our sets, that we must perform the negative portion of the rep slowly. While not everyone agrees on the ideal speed, it has been generally well accepted that a slow negative is more productive than a fast one. Well, this basic tenet of bodybuilding training may have just been turned on its head when a recent study revealed that fast negatives produced a greater growth response than slow ones. Needless to say, this contradicts the teachings of nearly every BB’ing authority over the last 4 decades.

Anytime a long-standing tradition is questioned, we should expect to encounter at least some measure of resistance, but as we delve into this topic a bit further and begin to explore the evidence in support of this study, you may find yourself wondering how this foundational doctrine went unchallenged for so many years. Not only does the performance of slow negatives defy decades of real-world experience in multiple sectors of the Iron Game, but the explanation in support of the fast negative borders on common sense.

Each repetition contains both a positive and a negative phase. The positive phase takes place when the muscle shortens against resistance (the lifting portion of the rep), while negative phase takes place when the muscle lengthens against resistance (the lowering portion of the rep). When evaluating previous studies, we find that the negative phase of the rep plays a vital role in stimulating muscle growth. In fact, when study participants performed positive only training, muscle hypertrophy was minimal to non-existent, but when negative only training was performed, a considerable growth response was observed. However, the greatest increase in muscle growth takes place when both phases of the repetition are completed.

Studies such as these serve to highlight the importance of the negative, but somewhere along the way, it was decided that the only way to reap maximum benefit from this part of the rep was to perform it slowly. Those in support of this style of training felt that slow negatives placed greater stress on the muscle by forcing it to work against the resistance, rather than letting the weight drop and allowing gravity to do the work. At first glance, this explanation makes sense, but further examination reveals just the opposite.

Now, before we go any further, I want to make it clear that at no point do I ever advocate dropping the weight, as it not only dramatically increases the odds of injury, but it temporarily removes tension from the muscle. As long as the weight remains under the control of the lifter, loss of muscle tension is a non-issue. Still, faster negative repetitions, even when performed under control, do carry with them an increased risk of injury, as the muscle is exposed to abrupt increases in tension just before the transition into the positive portion of the rep. However, it is precisely this increase in tension which makes a faster negative more effective.

More specifically, the reason faster negatives produce more muscular stress and an enhanced adaptive response is because it takes more muscular force to decelerate and stop a quickly moving weight than it does an equal, but more slowly moving weight. For example, if a car is in neutral and rolling down the driveway at 1 mph, you could easily place your hands on the bumper and stop the car from moving without having to exert very much force. However, I challenge you to try and stop that same car coasting down the highway at 60 mph. The car weighs the same whether it is moving at 1 mph or 60 mph, yet the amount of force required to stop the car when travelling at 60 mph is many, many times greater than when travelling at 1 mph.

The principle is the same with an exercise like the bench press. The faster the descent, the more muscular force the chest must exert in order to decelerate and stop the weight before transitioning into the positive….and what part of the rep are you doing as the weight descends? The negative! Therefore, faster negatives deliver greater muscular stress, particularly at the point of transition.

The same principle is at work when performing explosive positives, but in the reverse. In order to lift a weight more quickly, we must apply more force, which in turn recruits a greater number of Type 2 muscle fibers. Because of this, there is little debate regarding the superiority of explosive positives for stimulating growth, yet somehow, science is just now starting to recognize the value of fast, or what we could call “explosive negatives”.

There is also plenty of anecdotal evidence in favor of a fast negative. If we look at the training styles of all the BB’rs over the last 40 years who have built the biggest, thickest pecs, there are very few who utilized slow negatives. Almost all of the men known for a massive chest have performed anywhere from moderately fast to very fast reps in a rapid-fire fashion. Men from the golden-age, such as Sergio, Arnold, and Franco trained this way, as did Haney and Coleman and more recently, guys like Branch Warren and Johnnie Jackson. At one point or another in their careers, ALL of these men were known for some of the best pectoral development of their day. Now, compare that to the number of men who have built equally great chests using slow negatives. I am straining to think of any, aside from Markus Ruhl, but when you’re a total freak like Markus, a great chest is near guaranteed, regardless of training style.

By performing quicker negatives we can intentionally activate this reflex to a stronger degree, helping us perform either more reps with the same weight or more weight for the same reps than we would be able to lift when using slower rep speeds. Powerlifters are well aware of this and routinely use it to their advantage to improve performance.

While optimal rep speed will no doubt continue to be debated for years to come, those of you out there who have witnessed first-hand the superiority of rapid-fire reps in initiating muscle growth, now have scientific evidence to hang your hat on. For those of you who are unsure of their effectiveness, I issue the following challenge. For the next 2 months, leave your old training style behind and begin performing both the positive and negative portion of your reps as quickly as possible, with absolutely no rest between any of your reps. From the moment your work-set begins until the moment it ends, you should perform your all reps in rapid-fire fashion until failure—no resting or pausing at any point during the set is allowed. This is a brutal way to train, especially when doing exercises like squats and deadlifts, but the results are impressive. Of course, you don’t want to train so quickly that you assume an unreasonable risk of injury, so utilize some common sense here, guys. I have yet to speak with anyone who has not noticed near immediate improvements in muscle size from this type of training after transferring over from a slower rep tempo. Good luck.