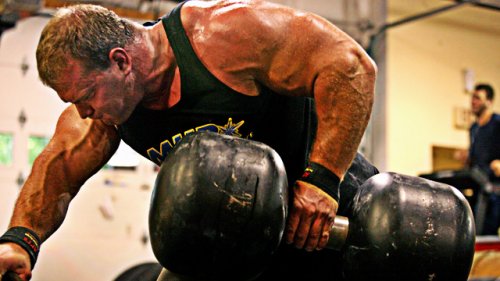 Bodybuilders these days like to remind us of the level of sacrifice they are nobly enduring to better the world through their own physique enhancement. They will do ANYTHING to achieve their goals…except eat plain food without making it taste good, do lots of cardio, work a real job on the side to afford the lifestyle, etc.

One thing that is becoming obvious is that almost everyone seems to have a different definition of what it means to suffer. At one point in the history of bodybuilding, it was just a “given” to eat unflavored food without any kind of special sauces or low calorie flavor options. Even if they wanted to, there really wasn’t nearly as many choices for the bodybuilders of 80’s and 90’s to lather on their food without the cost of calories from fat or sugar. This forced them to basically suck it up and just choke that crap down. Boiled chicken, plain rice, oats, etc. A lot of similar foods to bodybuilders now except the modern day lifter will have 2 condiments for every main element to their food yet make a post about living that #preplife. Sorry I just burped from my gallon of diet soda.

It’s the Walden Farms generation of dieters. There’s a flavorful solution to every problem, and while I’m sure some people can get away with it, part of me has to wonder just what type of effect all of these artificial flavorings will have on health and also appearance. Sure, many calorie free items are “safe”, but do we really have any concept of long term use of 9 different sauces daily that all apparently have NOTHING inside of them? I would wager that some of these products get by on a technicality and do actually impact the body in someway, whether it be in hidden calories or hormonal impact.

You know what is just about as unacceptable as boring food? Cardio. I’m not disagreeing that perhap we have a more calculated approach to cardio and dieting as a whole when compared to the old school “bulk up to gross weights and then do 2 hours of cardio till your in shape” days. However, there seems to be a trend of not only trying to justify doing as little as possible, but seemingly BRAGGING about doing as little as possible. This works for metabolic freaks who blow up to a whopping 11% body fat when they eat whatever they want all off season, but some people need to realize that getting away with the least is dependent on one thing….getting away with it! It’s embarrassing to see people boast about how many corners they are cutting and then not reach their potential. And the truly sad this is that many don’t realize they are cutting corners! That’s the difference. No one should go from zero cardio to 120 minutes on the stepmill, but there’s a time to cut back and a time to push it.

Possibly the only area that people haven’t lost the will to push the barriers of their own mental strength and physical well being is drug use. We live in a day when people won’t do more than 30 minutes of cardio because it “flattens out their legs” but will pop clen like they’re the sugar free mints that they eat by the bucket in between meals because they can’t stand the hunger, 2 hours of weight training is over training yet 2 grams of testosterone is completely fair game, and if you go 7 days without a binge level cheat meal you are going to shrivel up and die. Not just lose some muscle, but become a 130lb skinny little boy and die.

So the only limits we put on suffering are the ones that allow us to do less, taste more, and feel better about the whole process. When there’s people who won’t eat baked chicken breast and asparagus with perhaps just some sea salt but instead would prefer to lather it in a chemical paste labelled as “ranch” and won’t think three times (most people think twice) about taking DNP and cooking their insides. It is true that at a certain point of low body fat you will feel like shit regardless of what you are eating. However, this doesn’t change the fact that people are looking to be pat on the back for their warrior like focus when they are doing everything they can to sugar coat (literally) the process.