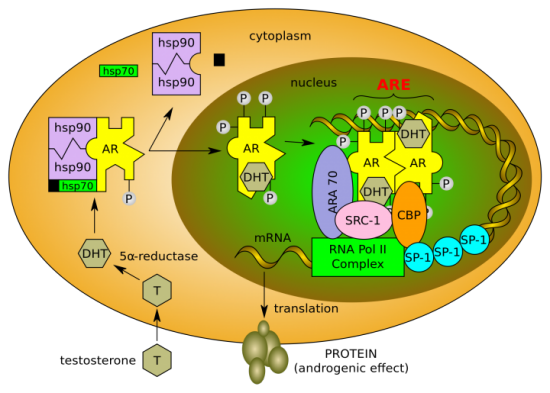 One of the most peculiar things about the steroid community, and in particular, the online steroid community, is the ongoing level of misinformation about the androgen receptor and the boogeyman of receptor downgrade. Because most people have experienced receptor downgrade in other forms, it’s a topic that we are somewhat familiar with (i.e. you drink so much coffee that caffeine doesn’t hit you as hard anymore, or you develop a tolerance for alcohol, etc…)

There seems to be a general consensus that the best, most productive cycle is often the first. After that, we’re told, our “receptors downgrade”. Presumably this means they do less, either because they decrease in number, sensitivity, or activity. Of course, this is an oversimplification, but more importantly, is inaccurate at best. The problem seems to relate to how the terms are discussed, as if we have X number of receptors and their sensitivity is a sole determinant of how we obtain muscle growth (or whatever) from the use of anabolic steroids. In truth, receptors are in a constant state of flux, with regards to their number and sensitivity. When we engage in resistance training, we increase the number and sensitivity of our androgen receptors. When we subsist on a hypocaloric diet, once again, we are influencing the status of our androgen receptors. And yes, when we use anabolic steroids, we are again engaging in an activity that affects our androgen receptors. But not the way you think.

The androgen receptor is (obviously) a receptor that gets activated by androgens (testosterone, etc…). When the receptor is paired with a ligand (in this case, an androgen), they form a homodimer and (skipping a few steps) initiate muscle growth (or fat loss, or whatever). [We’re not going to talk about how cortical steroids can also form a heterodimer with the androgen receptor, as it’s a bit beyond the present discussion, but I’ll just throw that into the mix, so we’re all on the same page regarding the complexity of the topic]

When I use a word like “regulation” in reference to the androgen receptor, we’re talking about control or power over the receptor itself, while “sensitivity” will be used to mean the receptor’s level of activity or action, and “number” will be used to mean…ehh…number. Something that regulates the androgen receptor is a thing that exerts power over the number or sensitivity of the receptor itself, either positively or negatively. Increasing AR sensitivity will allow the same number of receptors to do more work, while increasing the number will give us more receptors to accomplish more work. The opposite will also hold true – a less sensitive receptor (or having less in number) will mean less effect being exerted on the cell.

Half-lives and proliferation of the androgen receptor can vary according to the cells examined – meaning an intense HIIT session might cause a severe uptick in number and sensitivity for skeletal tissue, but less for the scalp or epidermis (the latter having a high concentration of receptors). If we look at muscle tissue, and there’s no ligand (androgen) attached to the receptor, we’re talking about a half-life of about three hours. So if you had two receptors, three hours later you’d have one (arbitrary numbers). And if production rate was one per three hours (again, in the absence of androgen), you’d be in a state of homeostasis with two receptors at all times, one dying off as another was formed. But if you add a ligand into the mix, the half-life more than doubles as does the production rate. Therefore, when people talk about a saturation effect, or receptors being clogged or desensitized, they’re not really painting an accurate picture of what’s happening. Not yet, anyway (or at least not on a typical 12-16 week cycle).

In fact, although they didn’t look at the androgen receptors per se, the classic Bhasin et al study showed a disproportionately greater response with the higher (and highest) doses of testosterone (up to 600mgs/week of a long ester). We can’t say that this was due to the receptor activity (as it wasn’t measured), but we can say that no “clogging” or “desensitizing” effect was seen. That study lasted 12 weeks, and it should still be noted that while the greatest results were seen with the highest dose, the majority of those results weren’t seen at the end of the cycle.

In contrast, work by Sheffield-Moore et. al., showed that when older men were given testosterone until their levels reached the higher side of physiological, their AR expression experienced a 200%+ increase after the first month – but after six months had returned to baseline. So again, we’re back to the body being very good at achieving homeostasis, and while a typical cycle won’t cause the downregulation we hear about, any long-term pharmaceutical use will ultimately lose to the body’s ability to regulate itself. Don’t worry though, if you stay off for long enough, you’ll become sensitized again. Just like staying away from caffeine…if you do it long enough, your next double espresso eventually feels like a grande kick in the balls.

In theoretical terms, this might give us reason to think that short, higher dose cycles, followed by aggressive PCT, might result in the greatest gains by the recreational user. We lack the appropriate data to substantiate that theory at the present time. In more practical terms, it’s unlikely that the “cruise” portion of a blast/cruise style protocol will allow for the body to resensitize the androgen receptors. Again, we’re lacking in clinical data for this as well. A less scientific but perhaps more empirical way to go about cycling would be to track gains, and cycle off when they slowed to an unacceptable rate.

Another wrinkle presents itself when we start digging into the binding strength (how tightly the ligand attaches to the receptor), and non-receptor mediated effects of anabolic steroids. Receptor downgrade can potentially be attributed to decreased binding. Or not. Because even if the androgen receptor weren’t present, androgens would still exert some of their classic effects. Let that one rattle around in your dome for awhile. Even if there were no androgen receptor, androgens would still have their anabolic effect. In fact, the greatest myotropic effects are sometimes attributed to some of the anabolics that show the least ability to bind to the androgen receptor – and vice/versa – some of the weakest anabolic effects are found in androgens that bind the most tightly.

Androgen receptor regulation is a complex topic, and certainly not reducible to “use a lot of steroids and you’ll get desensitized.” It’s probably a lot more accurate to say that using a ton of steroids for a long time is going to cause diminished results (on a mg for mg basis), while sensible doses and cycles will produce optimal results. But you probably knew that already…

Androgens stimulate myogenesis, but we do not know what cell types within human skeletal muscle express the androgen receptor (AR) protein and are the target of androgen action. Because testosterone promotes the commitment of pluripotent, mesenchymal cells into myogenic lineage, we hypothesized that AR would be expressed in mesenchymal precursor cells in the skeletal muscle. AR expression was evaluated by immunohistochemical staining, confocal immunofluorescence, and immunoelectron microscopy in sections of vastus lateralis from healthy men before and after treatment with a supraphysiological dose of testosterone enanthate. Satellite cell cultures from human skeletal muscle were also tested for AR expression. AR protein was expressed predominantly in satellite cells, identified by their location outside sarcolemma and inside basal lamina, and by CD34 and C-met staining. Many myonuclei in muscle fibers also demonstrated AR immunostaining. Additionally, CD34+ stem cells in the interstitium, fibroblasts, and mast cells expressed AR immunoreactivity. AR expression was also observed in vascular endothelial and smooth muscle cells. Immunoelectron microscopy revealed aggregation of immunogold particles in nucleoli of satellite cells and myonuclei; testosterone treatment increased nucleolar AR density. In enriched cultures of human satellite cells, more than 95% of cells stained for CD34 and C-met, confirming their identity as satellite cells, and expressed AR protein. AR mRNA and protein expression in satellite cell cultures was confirmed by RT-PCR, reverse transcription and real-time PCR, sequencing of RT-PCR product, and Western blot analysis. Incubation of satellite cell cultures with supraphysiological testosterone and dihydrotestosterone concentrations (100 nm testosterone and 30 nm dihydrotestosterone) modestly increased AR protein levels. We conclude that AR is expressed in several cell types in human skeletal muscle, including satellite cells, fibroblasts, CD34+ precursor cells, vascular endothelial, smooth muscle cells, and mast cells. Satellite cells are the predominant site of AR expression. These observations support the hypothesis that androgens increase muscle mass in part by acting on several cell types to regulate the differentiation of mesenchymal precursor cells in the skeletal muscle.