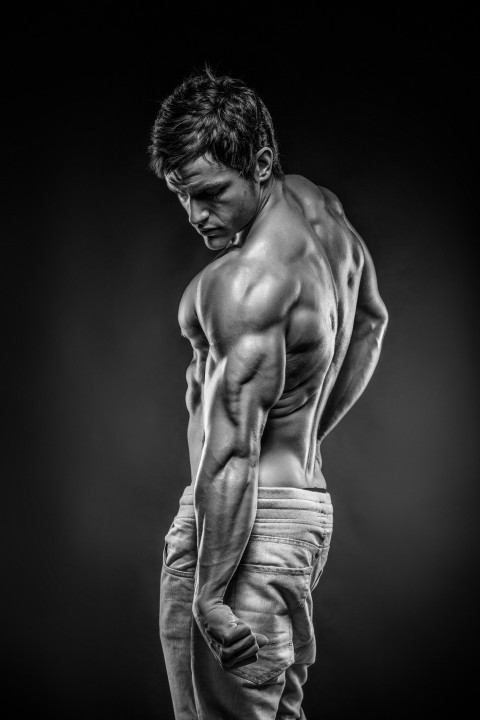 As bodybuilders, our unceasing quest to understand the effects of hormones on the body is driven by a singular purpose—that we might be able to manipulate them to our advantage in the pursuit of physical excellence. Over the decades, three classes of hormones have emerged as the most influential, due to both their vast range of effects in the body and their overall degree of impact on the attainment of our goals. These are steroids (AAS and estrogens), growth hormone, and insulin. Although each of these hormones can provide both positive and negative effects, for the most part, they are viewed as beneficial from a bodybuilding standpoint. But what happens when one of these produces a cosmetic side effect that is contrary to our goals? In most cases we simply employ the appropriate countermeasure and the problem goes away. However, such a remedy is not always available, leaving us to decide between the lesser of two evils.

When it comes to getting into contest condition, the elimination of subcutaneous fat and water are our two most important objectives, as they have the greatest overall effect on our appearance. These are not the only factors, however. Variables such as muscle fullness, muscle hardness and density, and striations also play a role in determining how “conditioned” our muscles look to observers. Another factor, although mentioned much less frequently than the former, is skin thickness.

The great Dorian Yates has mentioned this on numerous occasions, while crediting his relatively thin skin as a decisive factor in attaining the grainy look he was known for. This makes sense, as our skin, once all subcutaneous fat has been stripped away, is the final barrier between our muscles and the outside world. Enveloping the entire body like a glove, it prevents us from clearly seeing our muscle fibers and sinews as they really are. While the average person is grateful for the obscurification this natural covering provides, in bodybuilding it only serves to diminish muscle detail.

The skin is composed of three layers; the epidermis (outermost layer), the dermis (the middle layer), and the subcutis (the inner-most layer). Although the subcutis layer is technically considered part of the skin, it is where all subcutaneous fat is stored and is therefore highly variable in terms of total content and distinct from the other two layers, which are what we typically think of when we hear the word “skin”. Furthermore, subcutaneous fat is really just another word for “fat”, as all visible fat is comprised of this type of fat (intramuscular and visceral fat make up the remainder of fat within the body and can’t be seen). Due to the subcutis’s close association with bodyfat, from this point forward, whenever I use the word “skin” I will be referring solely to the layers of skin known as the epidermis and dermis.

Of these two layers, the dermis is easily the thickest, making up about 90% of our total skin thickness and as a result, it is much more apt to blur muscle definition than the epidermis. None the less, both layers contribute to this effect, making their minimization critical to displaying maximum muscular detail. Unfortunately, both growth hormone and estrogen can have a profound effect on skin thickness, making their mismanagement potentially counterproductive to achieving optimal contest condition.

Growth hormone increases skin thickness through two primary mechanisms, one of which is an increase in collagen synthesis. Collagen is the main insoluble fibrous protein in the extracellular matrix (a collection of extracellular molecules secreted by cells which lend structural and biochemical support to the surrounding cells) and connective tissue. In fact, it is the single most abundant protein in the animal kingdom, with as many as 20 different types of collagen having already been isolated and categorized. However, 80-90 percent of all the collagen found in the human body consists of Types I, II, and III, with Type I being the most common.

In the eyes of many, growth hormone’s ability to increase collagen production is a positive trait and one of the most important benefits of growth hormone supplementation, as it is responsible for providing not only its anti-aging and connective tissue strengthening effects, but many other benefits as well. However, the skin is comprised mainly of Type I collagen (particularly the dermis layer); the type GH just so happens to increase production of. In fact, GH has a dose-dependent effect on Type I collagen synthesis, with even moderate doses having been shown to increase production several-fold. The 2nd mechanism by which GH increases skin thickness, albeit in an indirect fashion, is through IGF-1 elevation, which enhances cell proliferation in both the dermal and epidermal compartments. Needles to say, this dual-effect can have a dramatic impact on total skin thickness, making GH use during contest prep a contradiction of sorts, as it possesses both fat loss and skin thickening properties.

Estrogen is no better off in this regard, affecting both the dermis and epidermis through multiple pathways. When assessing its effects on the dermis, we find that estrogen works through one of the same mechanisms as growth hormone–increased collagen synthesis, but the manner in which it accomplishes this is a bit different. In this case, estrogen stimulates dermal fibroblasts (cells within the dermis layer that generate connective tissue), a primary function of which is to produce collagen. In one particular study, estrogen was shown to enhance the production of Type I collagen by 76%. While not as dramatic as growth hormone, this is still a very respectable increase, especially in light of estrogen’s ability to promote hyaluronic acid synthesis. Directly involved in dermal hydration, a rise in hyaluronic acid levels translates into increased dermal water content and a subsequent expansion of skin volume. In one study, estrogen administration increased hyaluronic acid synthesis by a full 70% within just in two weeks.

Estrogen also has pronounced effects on the epidermis, boosting skin thickness through three distinct mechanisms. The first is stimulation of mitotic activity in keratinocytes; the main cell type found in the epidermis (keratinocytes make up roughly 90% of all epidermal cells). In laymen’s terms, this means that estrogen induces proliferation of keratinocytes via cell splitting, leading to an overall increase in the number of keratinocytes present in the skin. The second is by directly inhibiting apoptosis (cell death) of keratinocytes and blunting the production of chemokines; inflammatory molecules which can potentially contribute to cell destruction. Lastly, estrogen also plays a role in epidermal hydration, volumizing this layer of the skin.

Are there any practical applications to take away from this? Perhaps a few. First off, it appears that using growth hormone pre-contest comes with a trade-off—accelerated fat loss at the expense of increased skin thickness. Just a thought, but could it be that the massive overuse of GH in today’s bodybuilders has contributed to lack of crisp muscularity that was more prominent in the mid-late 90’s? There’s no doubt that today’s bodybuilders are getting just as lean (in terms of bodyfat) as the guys from the 90’s did, and in some ways even more so—particularly through the backside (if you doubt this, just compare the hams & glutes of the Top 10 in last year’s Mr. O to the Top 10 in 95’). Water levels are also at an all-time low. Yet, many of today’s bodybuilders seem to lack the deep and crisp muscular detail seen on many of the 90’s greats. While insulin is no doubt at least partially to blame, if not primarily so, it seems likely that the rampant increase in GH use (in terms of both dose and duration) is responsible for at least some of the problem (note: growth hormone also causes water retention that can range from mild to heavy, and which will obviously adversely affect conditioning when run all the way into a show).

While I have always advocated dropping GH at about 7-14 days out (I believe conditioning trumps fullness), I am hesitant to recommend dispensing with GH during prep altogether, simply because it does provide significant benefits, such as enhanced lipolysis and an improved rate of muscle retention while dieting. However, it appears that one would have to discontinue GH at least a few months out in order to fully reverse its negative effects on skin thickness. Furthermore, the degree of improvement could vary substantially from individual to individual based on numerous different factors, including one’s natural level of skin thickness. Because of this, I think few bodybuilders would be willing to risk removing growth hormone from their program just to find out. However, with GH having a dose-dependent effect on collagen production, the most sensible solution is simply not to take more than is necessary to bring bodyfat into the proper range and maintain muscle mass. This is good advice for many reasons, as excessive GH use, especially over the long-term, can lead to multiple undesirable cosmetic side effects, ultimately harming one’s appearance.

Eliminating the negative effects of estrogen on skin thickness is a much more manageable proposition, as it requires little other than maintaining one’s estrogen levels within the proper range. It is important to note that the negative effects of estrogen on skin thickness can take several months to fully wear off, so maintaining an elevated estrogen level throughout the first few months of contest prep and then dropping levels way down just a couple weeks before the show is not ideal. For all you who use large doses of aromatizing drugs throughout the majority of prep, keep this in mind.

In my opinion, one would be best off maintaining a low-normal estrogen level (20-30) throughout prep and then dropping levels down into the 10 or so range the last couple of weeks before the show. The reason here is that estrogen has a beneficial effect on glucose disposal and even assists with fat loss, but it does not take much to obtain these benefits (note: elevated estrogen levels negatively affect fat loss). Therefore, maintaining a normal estrogen concentration during the first few months of prep will allow us to continue receiving its benefits without adversely affecting fat loss. Then, by dropping levels down to around 10 the last few weeks, we eliminate any lingering water retention that might still be hanging around, while leaving just enough estrogen left to assist with glycogen storage.

Hopefully, this article gave you something to think about, as there are too many bodybuilders whose choices are based on nothing more than assumptions and hearsay. But regardless of the course you choose, know that all PED’s have risks, either to our health or our appearance. Sometimes, all is takes is a slight manipulation to yield positive results in both of these areas.