Muscle Implants: Do They Belong in Bodybuilding? 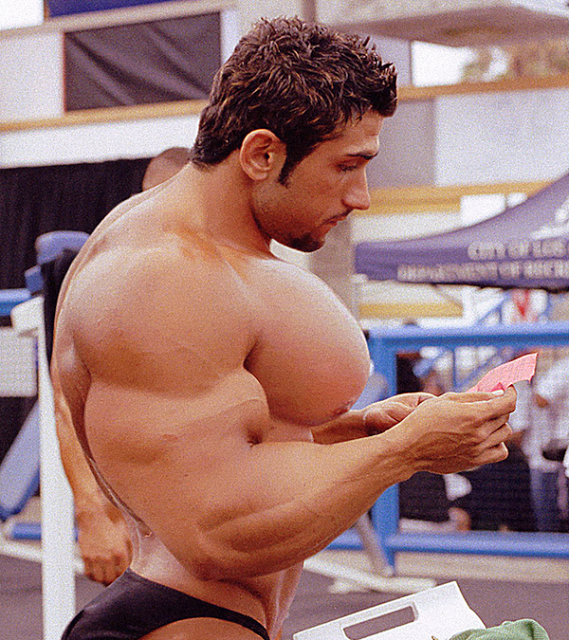 It’s common to see the female side of the fitness industry shelling out money on implants. Many competitors pay big bucks to get breast implants and even butt implants—but that’s the nature of the breast, I mean beast in that side of the industry. But how is it received in the bodybuilding world? After all, the sport revolves around building your body in the gym and feeding it the nutrients it needs to repair and grow, right? Putting in the blood, sweat, and tears in the gym and resting the body so it can properly recover the broken down muscle fibers to come back larger and stronger. Not paying to bring up lagging body parts that you don’t want to work to build. Am I wrong here?

If someone is unhappy with the way they look and they are self-conscious about a part of their body and it makes them feel better to get an implant (or implants) then by all means, do whatever will make you happy—it’s your life and body. Or some people have muscle tears or have accidents that leave them with severe imbalances where they go under the knife for cosmetic surgery to balance out their symmetry. Seems reasonable. Then again you also have some extremely vain people who do it simply for the attention they will get from looking a certain way or having certain pronounced features.

Genetics is another reason some men get implants. We all aren’t blessed by the testosterone God’s and can put on lean muscle mass easily. So some go the route of having surgically placed implants put in.

If competing in the sport of bodybuilding, this could also be advantageous to quickly bring up body parts. A surgeon advised me that it’s not uncommon for clients to come in and get bicep, pec, and delt implants all at once—leaving them looking like a muscle God when it’s all said and done (at least from the waist up). Another area that many guys will get implants are in their calves and even glutes.

Are there risks involved with getting implants? Sure, but technology today has truly minimized most risks and surgeries seem to go off without a hitch, allowing people to get back to their normal lives fairly quickly.

Getting implants doesn’t come without some possible negative aspects. If word gets out that a bodybuilder has implants, there is a possibility that it could sway the judges to not score the individual as high compared to someone who is standing next to them without implants but has the same size and symmetry—through hard work in the gym, not by opening up their wallet. While performance enhancing drugs are commonplace in the industry today, implants aren’t something we really see or hear about. Maybe we are too naive to think that athletes are doing it, or maybe they are simply covering it up extremely well? Either way, I honestly couldn’t tell you if any of the top IFBB bodybuilders have implants. If so, maybe someone can enlighten us.

Knowing that a certain bodybuilder has implants could also hurt their chances of getting a sponsorship. If a brand/company knows the man behind the muscle really never worked for all of that mass, it might lead them to look past that individual. Paying for an athlete to represent your brand who has implants could lead to criticism in the industry not only by other competitors, but by bodybuilding fans who feel that implants don’t belong in the sport.

Let’s be honest, we have all seen some botched surgeries where someone had implants put in that didn’t quite come out the way they had planned. On paper it was all gravy which led them to sign on the dotted line, but then after they woke up from surgery they noticed something wasn’t exactly right with the “look”. Or have you ever see someone who had an implant shift on them? Especially with women who had a breast implant shift and move around on them? Quite awkward. If that doesn’t make someone self-conscious I don’t know what will.

Another risk with implants is that the specific body part sticks out like a sore thumb sometimes if it isn’t done right to give a natural look. Think of a reverse Popeye where now a guy is walking around with huge bulging biceps but it looks like he has toothpicks for forearms. Not a good look.

So Is It Right?

The answer is going to be different for everyone. And there might not even be a true “right answer” on the subject. Everyone has their own ethics and morals so I can’t stand here and say yes or no and speak for everyone. However, my position on this is that I feel implants are cheating when it comes to actively competing. There are plenty of athletes who are using anabolics and other drugs, but the playing field is even when you look at the physiques in the IFBB. The same goes with site enhancement oils (SEOs). It’s common for bodybuilders to shoot oils like synthol into lagging muscles to get them to appear bigger or pop more. You could even make a case where synthol is cheating as well since you didn’t earn that look and it isn’t even muscle, rather oil.

Implants take things to another level where you actually didn’t earn those “muscles” you are showcasing on stage. You could literally have someone who is lean and undergoes surgery to have implants placed in their chest, arms, delts, glutes, and calves and go on stage looking very impressive—to an extent.

I personally don’t feel like implants belong in the sport of bodybuilding and for that reason I’d frown upon athletes doing such. But to each his own if that’s what someone feels they need to do in order to get what they want out of their life and career. I’ll let you have your own opinion and would love to hear your feedback on the topic.