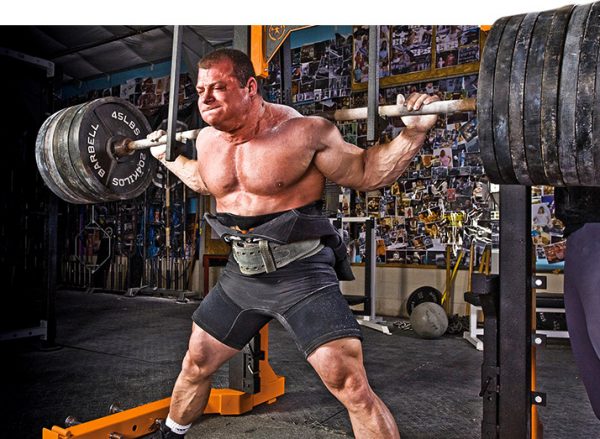 When Men’s Health first published an article about Blaine Sumner I was blown away. Not so much that a powerlifter was taking in 8,000 calories, but more so the way that he was taking them in—by using his blender and shaker bottles. Can you say “liquid diet”? Check it out.

For those of you who don’t know, Blaine Sumner is a 29-year-old powerlifter better known as the “Vanilla Gorilla”. He also just happens to be a gold medalist at the International Powerlifting Federation Classic World Championships. This behemoth of a man stands at 6’3” and tips the scales at a ginormous 370 pounds. That’s a lot of man right there. He says that while his diet is very boring, it’s something he needs to do in order to be the best at what he does.

So the question arises, how much does someone of that size need to eat in order to recover from workouts, maintain his muscle mass, and fuel his body to go throw around some heavy ass weights in the gym? Well, around 8,000 calories per day to be exact. Of those 8,000 calories, around 2,800 calories are coming from a protein source (700g of protein). But here’s where things get a little different (to say the least). While most people would be either eating their food or supplementing with a protein powder, Blaine eats all whole foods mixed with just a little protein powder in the form of a shake. Yes, you heard that correctly, Blaine actually puts whole food sources such as chicken in a blender, blends it all up and then drinks the mixture. Below is what a daily food log looks like for this beast.

BREAKFAST
1.3 pounds unseasoned cooked ground chicken breast, 3 cups egg whites, large handful spinach, and 24 oz. water—pureed into a shake
3 Tbsp extra-virgin olive oil
He swigs the olive oil out of the bottle. It’s how he gets his healthy fats, along with more calories.

LUNCH
10 to 12 oz. of red meat (medium-rare sirloin)
Cup of rice
This is one of the two meals that he’ll actually chew.

MID-WORKOUT SHAKE
2 scoops vanilla whey protein powder and 90g of dextrose powder, shaken with water
His workouts are 4 hours long. The simple carbs from the dextrose help fuel his muscles during the extended resistance training session.

If you read the above and instantly felt full, you’re not alone. That’s enough food to feed a whole family and then some. Most people complain that they have a hard time fitting in 3 meals a day let alone 10. Blaine mentioned that with all the food he was consuming on a daily basis that he just got sick of all the chewing. Chewing all of that food is like a workout in itself each day. So Blaine decided to streamline the process and make it more efficient by blending the food together. While unconventional, it clearly works for his particular situation. And who’s going to argue with a man who squats 1,102 pounds, benches 885 pounds, and deadlifts 816 pounds? Not me.

Blaine is on a warpath to continue breaking records in the sport. Back in March 2016 at the Arnold Sports Festival, he broke 6 IPF World Records. Come the next Arnold Sports Festival in March 2017, I wouldn’t be surprised to see Blaine break his own records. This man has a lot of life in him and many years ahead to continue solidifying his legacy in the sport. I wish him nothing but the best.