The Lamest Excuse In All of Fitness 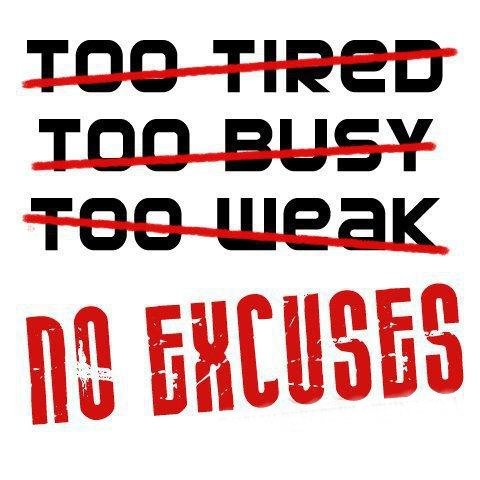 I have discussed numerous illogical misconceptions and ridiculous assumptions in the past. The public’s obsession with calories, people who hate food claiming to have fast metabolisms, and the assumption that bodybuilders are stupid, all come to mind. One of our industry’s largest mysteries is the nonsensical fear of getting too huge and/or getting “bulky”.

The latter being the dreaded fear of most females. Bodybuilders spend years upon years taking anabolic drugs, eating five times as much protein as the average person, and training six days a week for two hours at a time, in order to get huge and lean. Even with these extreme measures, most guys are unable to ever build an overly impressive physique. How men and women alike are capable of saying they “do not want to get too big” with a straight face, is beyond me. Obviously, not all of these people are naive enough to think that getting huge and muscular is accomplished by accidentally training too hard and eating right. That said, there has to be reasons people claim to fear getting too big, besides the ridiculous assumption that it happens rapidly, at a rate beyond one’s control.

Working in retail supplement stores for the overwhelming majority of my adult life, I have heard it all. It is not uncommon for a guy to walk into a store and proclaim “I want to put on some muscle, but I do not want to get huge like those guys you see in magazines, that’s gross.” Come to think of it, comments like this were extremely frequent. Roughly one out of every twenty customers told me that they wanted to get more muscular, but they did not want to get “huge” or “look like the guys in the magazines”. These statements make me wonder, do amateur sprinters go into Foot Locker and say “I want to get faster, but I do not want to get as fast as Usain Bolt, that’s disgusting.”? Do young football players approach their new strength and conditioning coach with “I need to become a better running back, but I do not want to be as good ad Adrian Peterson, he’s way too good, that’s too much”? I wonder how many young basketball players fear getting so good that they can routinely drain ten three pointers per game in NBA games, a la Steph Curry. Any human being with any degree of sense can see the silliness of statements like these. A person saying that they do not want to get too big is no less ridiculous than any of these other examples.

When was the last time you heard a guy who works out regularly say that he looks good enough, and he does not want to improve anymore? The same question can be asked for any other athlete. Have you ever heard an athlete say that he or she “good enough” and does not want to get any better? The only reason any person would make these claims in regards to improving their body, is because they are afraid of the hard work it might take to make these improvements. It would seem that some these people think that if it is possible to get as big as Ronnie Coleman or Dorian Yates, than getting to the size of their favorite cross-fitter or fashion model must be fairly easy and take only a trivial amount of work. However, this foolish assumption cannot possibly be the number one reason that guys decide to throw around these asinine statements. It is more likely that most of these people are simply lazy and by stating that they do not want to “get huge” they are really just showing us that they do not want to work very hard. It would take years of hard work and dedication to look like an elite bodybuilder, but they might be able to go out and drink on weekends while missing meals and workouts, but still look like Ryan Reynolds or Sylvester Stallone. Obviously they are sadly mistaken, and until they learn the truth about what it takes to build those physiques, they will never look like much of anything.

Women are just as guilty of these outrageous statements as men, if not more so. Every person who has been involved in the fitness industry for any amount of time has heard several females, if not hundreds, say “I do not want to get bulky.” This is the number one female reaction to the idea of them or any other female training with weights. Let us get something straight right off the bat. There are only two ways that a female can possibly get “bulky”. These two bulk-inducing factors are the heavy abuse of steroids and getting fat. Pure, natural muscle will never make a girl “bulky”. Period and end of story. So as long as you do not get fat or load up on anabolic drugs, you will not get bulky, no matter what you do ladies. This assertion that weight training will make females bulky is one of those unfortunate things that human beings display that really causes me to question just how intelligent we really are as a species. Woman might as well claim that they are afraid to drink water because there have been a couple people throughout history who have chugged gallons of water at a time and killed themselves.

In your entire life, have you ever known a female who went from “normal” to too bulky without gaining fat or using steroids? No, you have not, and you never will, because it is as close to impossible as any task can be. Do you ladies not see all of the men slaving away in the gym day in and day out who build basically no muscle at all? Ninety-five percent of men who weight train do not build any significant amount of muscle at all. Do you really think with a testosterone level that is fifty times lower that these guys, you will blow up with loads of muscle and look bulky? You cannot be serious. Of course, the tainted minds of American girls who think the bulimic Victoria’s Secret models who are 22% plastic look good, might have a much different definition of what bulky is. Some of these disillusioned girls think that girls who are 5’4” 120 pounds are “bulky” because they have a little bit of muscle on them. If you are not one of these brainwashed women, and your idea of bulky is accurate, you will never get bulky if you avoid drugs, beer and brownies.

On a related note, muscles are attractive whether you like to admit it or not. Some girls will say they do not like big muscles usually because they do not want to piss off their scrawny boyfriend or husband, and the same can be said for men who say they don’t like girls who are in really good shape because their significant other is either fat or sickly skinny. Of course, insecurity is often to blame for these foolish statements as well, due to the fact that people do not want to feel chubby and pathetic next to their significant other. Instead of wondering, go ahead and build some muscle and see for yourself if you get more positive comments and looks from the opposite sex. It is absolute fact that you will, just like it is absolute fact that over ninety-nine percent of females cannot get “too bulky” without gaining fat or abusing steroids. Before you worry about getting too big, too lean, or too good at a sport for that matter, you should probably worry instead about never getting off the couch, getting fatter, losing muscle and wasting away the potential to look and feel great.