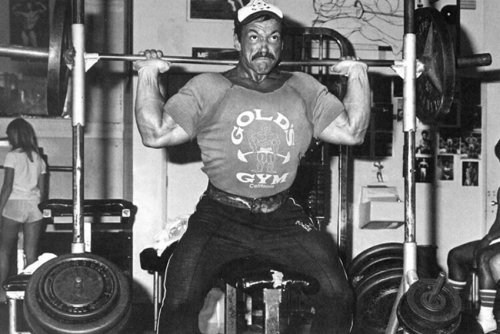 Over the last several years, I have considered myself privileged to have witnessed the evolution of the BB’ing community as it continues to advance and grow. In many ways, this progression has been a positive experience, leading to an increase in knowledge in the areas of training, nutrition, and supplementation. As BB’rs, it is in our nature to take advantage of these advancements, doing everything we can to help create our own idea of the perfect physique. For many, the desire for physical improvement is all-consuming, with lifters of all ages sacrificing the normal pleasures of life in the pursuit of their goals. To the uninitiated, our passion for the sport is often viewed as obsession, but to us, it is just another day in the gym.

Knowing the heart & determination of the typical BB’r, I am at a loss to explain the acceptance of a recently emerging belief system, which has taken root in the minds of younger BB’rs everywhere. While we could debate the various causes for its entrance, I am currently less interested in the why, than I am in opening the eyes of those who have been ensnared by this faulty way of thinking. In every previous generation, it was well understood that hard work was a necessary prerequisite for success in this sport and that without it, one would never realize their true potential. This truth seems to have eluded many of today’s BB’rs, being replaced with the belief that drugs are able to make up for a lack of effort in the gym. “Just take more drugs” is frequently the prescription for a lazy ass trainer who doesn’t feel like putting in the work. In order to justify this approach, these individuals point to today’s pros as proof that drugs are enough to overcome a training deficit. While it is true that some of our current pros could stand to apply a bit more intensity in the gym, this segment of the population does not represent the majority and surely isn’t reflective of the attitudes and beliefs of those pros who are attempting to make the most of their genetic potential.

With so much information available to this generation, one must wonder not only how they succumbed to this mentality of laziness, but how they are seemingly unable to understand the unique and vital role that hard training plays in the overall muscle-building process. Many of these individuals have become so convinced that drugs supersede every other facet of the muscle building process that they refuse to believe the claims of any pro who says he built his physique on anything less than massive doses of every drug imaginable. When a pro BB’r does publically disclose his cycle, if it does not conform to the preconceived dosing standards deemed necessary by these individuals, the pro is automatically labeled as a liar. While honesty may not always be at the forefront of every public admission, in some of these cases I do indeed believe these men are telling the truth. There is no doubt that drugs are essential to this sport, but the value placed on them has become so lopsided relative to the areas of training & nutrition, that I would not be surprised if some of these people think they could sit on the couch all day long and get huge lifting the television remote…as long as they take enough drugs. Now, there is no way in hell anyone is going to approach the size of an IFBB pro without making PED’s a central part of their program, but if training is sub-par, making the most of one’s God-given talent is an impossibility.

It is important to remember that steroids only serve to augment the muscle building process. Regardless of how many drugs one takes, used by themselves, they are basically worthless. On the other hand, training is absolutely essential to muscle growth, without which we go nowhere. In order for a muscle to grow, it must receive a signal to do so. This signal, or stimulus, is supplied only by weight training. The type of stimulus a muscle receives will determine its response to that stimulus. If we go into the gym and do a few sets of 2 pound dumbbell curls each week, we can be sure that such a stimulus will not be sufficient to generate a growth response. In turn, the BB’r who combines extraordinary effort along with intelligent application will come much closer to achieving his full genetic potential than a BB’r who fails to apply himself to the best of his ability.

In order to shed further light on the importance of training intensity, as it relates to the growth process, let’s look at the drug-free approach to muscle growth. Unlike those lifters who turn to drugs soon after picking up the weights, natural BB’rs can’t just “up the dose” as soon as their gains start to slow down. They have at their disposal a more limited number of mechanisms through which to facilitate growth, so they must learn to manipulate them to their best advantage if they want to continue breaking through plateaus. When a drug-free lifter first starts training, like all of us, he puts on size relatively easily, but after a brief period of time, he reaches a point where additional increases in muscle tissue are very hard to come by. Eventually, he will hit a plateau…a state in which one’s training efforts go unrewarded. Long periods of time can pass without experiencing an ounce of new growth. Through trial and error, natural BB’rs have learned that if they want to break through these plateaus, they must make adjustments to their training by either training harder and/or smarter (assuming nutrition is optimal). As time goes by, additional plateaus are hit and each time, the BB’r must utilize training in order to move beyond it. Without drugs in the mix, this is the BBr’s only option.

BB’rs who turn to drugs early in their training often learn to depend on them for overcoming sticking points, as they are never forced to work harder/smarter in order to move beyond them, but this comes at a price. Generally speaking, it is true that steroid users can advance further in their development without having to improve their training, as they can simply increase the dose and/or add additional drugs into the mix, as soon as they hit a plateau. This will work for a while, but sooner or later even they will experience diminishing returns and eventual stagnation, where continuing to increase the dose will have no further effect on growth. The human body has a limit to the amount of steroids it can utilize, as the number of androgen receptors sites found in muscle tissue finite. Non-genomic mechanisms aside, continuing to administer AAS after receptor saturation has been reached is a useless proposition, serving only to increase the incidence of side effects, while providing no benefits. By exhausting the body’s ability to make additional gains through drug use early in one’s career, the BB’r ends up playing his high card prematurely, leaving him with nothing to fall back on when gains get really tough to make. In the long-run, those who go down this road usually end up compromising their ultimate development.

By relying on drugs for such a prolonged period of time, it is possible to lose sight of the fact that drugs are a compliment to the training experience, not the sole means by which progress is made. I have witnessed numerous BB’rs spending exorbitant amounts of money on drug cycles, purchasing anything which they believe might give them even the slightest advantage, yet critical aspects of their program (training & nutrition), which have the power to dramatically enhance their results, are neglected in favor of drugs which will be mildly effective, at best. Sadly, in this day and age, components which used to be viewed as the foundation of a successful BB’ing program are now being given secondary consideration behind drug usage. When looking at the bigger picture, it is easy to see why so many aspiring BB’rs believe it is necessary to use mega-doses of AAS, GH, and insulin in order to turn pro. They have forgotten (or never learned) just how much influence weight training has over their ability to make progress. Because these individuals are not extracting maximum benefit from their training (which is like a boxer tying to fight with one hand behind his back), it may indeed be necessary to utilize mega-doses of BB’ing drugs in order to reach pro size. Therefore, it is logical to conclude that any pro BB’r who claims to have built his physique with a comparatively moderate amount of drugs must be lying. From their perspective and based on their own experience, they are unable to see how it is possible to attain such a great size when they had to use twice the dosage to get half the results.

In reality, genetics permitting, many, many people are able to attain pro size using 2 grams of gear or less, as long as training & nutrition are optimized. It wasn’t long ago that 2 grams of gear was considered a massive dose, but these days, in some circles, it is almost viewed as a starter cycle. The hormonal environment generated when using 2 gram of AAS, particularly when utilizing the more potent muscle-builders, is able to support an exceedingly large amount of muscle tissue. However, those who rely on drugs as their primary means of initiating growth will find that they need to use a much larger dose to build an equivalent amount of muscle tissue and ultimately, if their priorities remain unbalanced, they will never go as far as they could have. In the end, hard training was and will remain the cornerstone of BB’ing success. It is capable of separating the champions from the wanna-bes and without it, you will never be able to make the most of your potential in this sport. It will allow you to go father with less drugs and farther still with more drugs. Big muscles are available to all, but only those who understand the role hard training plays in their overall development will be able to go as far as their genetic potential will allow.