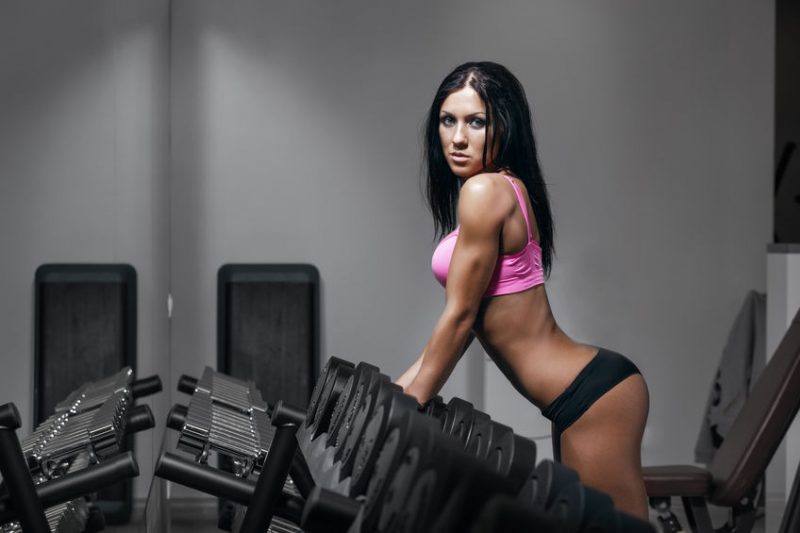 If all emerging movie-stars dream of buying a bus ticket to Hollywood, then all aspiring fitness enthusiasts dream about getting a call or an email, landing a shot as a fitness model. Some will go the competitive route, competing in local contests with the NPC, graduating to regional events, and then trying their hand at the national level for a coveted IFBB Pro League card. There are a great deal of benefits to being a world famous bodybuilder or fitness champion, including lucrative contracts, press, and endorsement deals. Champions can be fitness models, but fitness models need not be champions. For fitness models the trek is a bit different, they must take time to make valuable connections, hone in on their people skills, and be at trade shows where they can get discovered.

Times have certainly changed, because back in the day, only select models would get to work with powerful agents, only select models would get to work with top photographers, and even fewer models had the means or the wherewithal to take the plunge. Today, everyone has a $1,000 phone, plenty of self-confidence, and in some cases – shamelessness – to promote themselves as the next big thing. I say shamelessness with a great deal of levity and good humor, because some physiques aren’t that impressive at all, but today it’s not just physical. Someone with a lackluster physique but strong social skills, strong wit, or even a certain type of humor, can get signed, can make it! If their followings are big enough and their followers will respond favorably to whatever they promote, then the physique is no longer as important. It’s still fitness modeling, even if the fitness isn’t as prioritized. Some basics don’t change though. For example, believability still matters, credibility matters, and putting a limit on how much marketing any single person does, remains key, even if often overlooked.

Believability is a term that hits the concept addressed, right on the head. Sales puffery is all but an art form in the fitness industry. The market has basically become a forum where marketing excess is best. This is certainly not something imposed on the buying public – it’s something they collectively wanted. The case has been made many times over the last 10-20 years. R&D and even quality ingredients have taken back seats to flashy sounding products, shiny labels, and exotically colored capsules and pills. Supplement shoppers would rather LOOK like they’re taking something different, even if they don’t FEEL any different. It’s all about appearances nowadays, so a certain amount of puffery becomes expected; however, there’s a limit. For example, some companies in yesteryear would boast results that left many of us scratching our heads. “100% better on your bench? 25% more strength? 1000% more effective than the regular?” To say these things sounds silly, but to read them on a product label, followed by several asterisks (no less), is just plain insulting to the consumer’s intelligence. If you can’t even make a bullet point without following it with several paragraphs of boilerplate (tiny text) disclaimers, then you have a problem. Limited puffery is fine, maybe a little extra is right up most people’s alley, but the internet also gave people the ability to check up on the really crazy claims being made. When the dudes in the white lab coats in silly supplement ads started losing credibility over the outlandish marketing claims, the products started to sell less. When all else failed, some companies really pulled the wool over their consumers eyes, pressing on with the silly claims, and but introducing the concept of proprietary blends. Others, the bad ones, even took to amino spiking. And we all know how that panned out for them.

Fitness models play a key role in the marketing myth, because many times they are the Before And After, they are the ones to whom the testimonials are attributed. Sometimes the words are the competitor’s own and sometimes they’re pre-written for him/her by someone else. To what degree a model lends him/herself depends on the stipulations of the work. Most models at this level would be under contract, but that’s also the way it used to be; it may not be like that across the boards today. In most cases, athletes will go along for the ride. In many cases a product that rose to the top, took the athlete with it, and/or vice versa. The blessing would be if the consumer couldn’t think of the product without the thinking of the athlete – a real package deal! The downfall would be if the product ever flopped. No superstar wants to be associated with anything that fails, especially not something downright rejected by the buying public. That could easily spell disaster for the personality. Remember, there’s no escaping that, because athlete’s name and likeness are in play. The athlete doesn’t oversee R&D, packaging, any of that, but the same way he/she gets all the love associated with a product, they too will get the bad.

Credibility is key. It differs significantly from believeablity as well. Credibility is the actual good will that’s generated through marketing campaigns, through customer feedback ratings on retail websites, and through social media. It’s also how the buying public perceives not only the product, but the fitness model(s) associated with it. Street cred and net cred take a great deal to build, especially because of the hundreds of brands at the forefront and the thousands of others doing business on smaller, lower levels and scales. Credibility doesn’t really care about how many employees you have, how many pallets you move, or even how many ads you take out in print or web publications. Unlike believeabilty per marketing, there’s really no way to gain cred. Once you have it, you want to harness and maintain it. The absolute LAST thing you want to do, is to lose it! When the product/brand loses its cred, all fitness models, like any good captain, will sink with the ship. I don’t know about you, but I don’t of too many ships that have UNSUNK themselves. I’m sure it’s possible, but not something anyone would like to try doing.

So far, we’ve focused on fitness athletes and working with supplement companies. Why is that? Well, magazines no longer really exist, website media doesn’t really sign models, and if we’re talking fitness industry and you remove supplements, that doesn’t leave much work. That having been said over-publicity is a major culprit in losing both marketing believability and creditibltiy for pretty much all companies in this market. Assuming that neither cred or believability are hit, people will and do, get tired of seeing too much of any given person – I don’t care how popular they are! Popularity is about supply and demand. If you can see, hear, and interact with a sought-after star whenever you want, well then, they’re not as sought after. The moment people expect to see them, learn their routines – less and less people go bonkers upon seeing them, the mystique is gone and the hype just fades away.

Once again, if fitness models are under contract, these are all topics that a good agent can and should cover; however, if these items are not ironed out, one good contract could be both the big break and the huge flop of an aspiring model’s career. Much like in physique-based sports, your physique is what gets you nationally-qualified, gets you the pro card and gets you the contract. As a fitness model, your physique is more than likely going to be a major reason why you get signed, but your personality and wit could also account for it, in a big way. If you create a portfolio and a persona that companies want and people love, then you have to protect it. Everyone wants overnight success and sometimes when presented with instant fame and fortune, it’s very difficult to pass up. Just remember, though, slow and steady wins the race. If you’re serious about being in this game – for the long haul – then longevity should be your #1 priority. Avoid companies with ridiculous ads, avoid companies that push fake weights on you, and avoid companies that are going to use you to the point you’re saturated in the fitness industry. Just like UNSINKING the ship, it’s VERY difficult to be over-marketed, disappear for a while, and then re-emerge with people re-interested in learning all about you.

This is certainly a lot to digest and for those of you just getting started, it may not make any sense, but it’s gold to those who adhere to what I’m saying. And if you think this advice is aimed at a particular gender – you’re wrong. That having been said, if I had to say who would have more to lose, it might just be men. Successful, superstar, male fitness models are rare and the ones who are popular for 10, 15, or 20+ years I can count on one hand. Men will also be used for more of the muscle-gain and strength-increase type campaigns. These are usually the really ridiculous ones you want to avoid. Once you get dubbed a clown – you’re DONE. Women, on the other hands, may be used for the edgier, more exotic type shoots. This could also have a detrimental effect. In all honesty, all genders, age groups, body types, should take these tips to heart. If anything, they’re going to make your time on top a lot better.

I hope you enjoyed reading this article. I look forward to reading your comments, whether here at Iron Magazine or wherever you may see this article. Thanks for reading.