Shake Your Supplements Before You Scoop 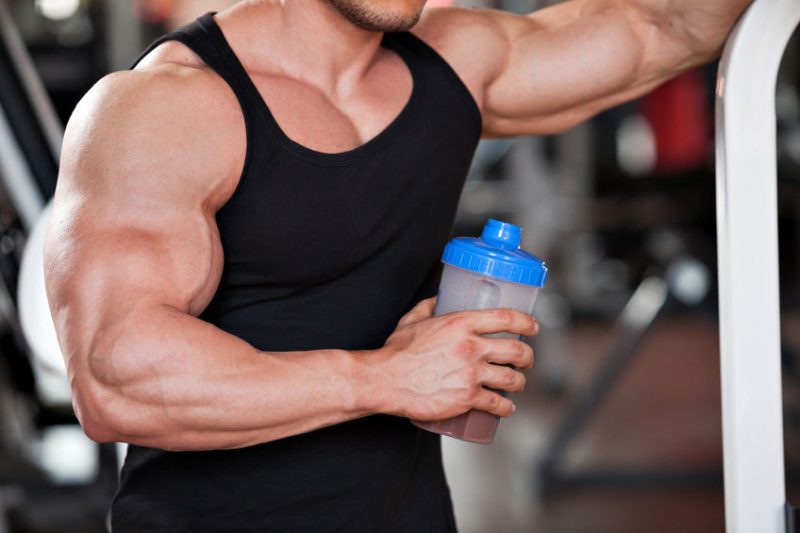 How many of you shake your supplement tubs before you shove your hand in and scoop out the contents? No hands in the air? Well, you should be! If you want a more accurate dosage, you need to shake it up before each use.

Lack of consistency due to so many ingredients

Have you looked at the back of your pre-workout powder? If so, you’ll notice that there is a laundry list of ingredients on the label. You’ll also notice that each ingredient (unless a proprietary blend) will show how much of that specific ingredient you will consume per serving. What they fail to mention, is that it’s dependent on if your powder is mixed correctly.

Let’s use a few examples to illustrate what I’m talking about. Let’s say you are baking. You toss some salt, sugar, and flour into a bowl. You mix things up with a spoon, but when you look down into the bowl, you’ll notice it isn’t exactly totally mixed where it’s one uniform mixture. Instead, you’ll see a clump of sugar over here, and a bunch of flour over there, etc. Another example would be taking a jar and filling it with sand on the bottom, and then dropping some rocks on top of the sand. As it sits at that point, you have both the sand and rocks separated. If you toss that jar in your car on your way home from the beach and it rolls around slightly, you’ll notice when you grab it from the car that the rocks and sand have mixed slightly. Many of the rocks are at the bottom of the jar, but there are a few still mixed within the sand that haven’t made their way to the bottom. So, what am I getting at? Each ingredient in your pre-workout has a different molecular weight. Similar to the rocks and the sand in the jar having different weights to them. As you’ll notice from the jar, the rocks fell to the bottom—simply because they weigh more than the sand. The same thing happens in your tub of pre-workout. The heavier ingredients eventually settle to the bottom of the tub.

Have you ever taken your pre-workout one day, had a great workout and seemed super energized and dialed in, and then took another scoop the next day and really didn’t feel much of anything at all? It’s because you are getting different amounts of ingredients with each scoop since they aren’t properly mixed and can have some settling from sitting on the shelf and from you moving it around through use. This causes some areas to have a higher concentrations of stimulants when you scoop, and other areas where there may be a smaller amount of stimulants present. Sometimes you can even look in the tub and see areas that look the same and other areas that don’t. It’s because there are higher concentrations of an ingredient in those areas.

Shake it up a bit

If you want each scoop of your pre-workout (or any powdered supplement) to be the same, you need to shake it up. Caffeine for instance tends to fall to the bottom of a preworkouts contain due to the molecular weight being heavier than some of the other ingredients. If you notice, for that reason when you get to the bottom of your tub, you generally feel as if the pre-workout powder is extremely strong and you’re feeling the effects more than you have been.

It’s not something that brands put on their labels, and I’m actually not sure why. You would think for safety reasons they would want you to get the dosage that’s on the label versus a normal scoop that contains 200mg of caffeine, potentially having 250-300mg. And we all know that no one these days takes just one scoop of a pre-workout anymore. They’re taking 2-3 scoops at a time. This could be doubling how much of a stimulant you’re taking at a given timeframe.

Overall, you’d want your pre-workout to be consistent, right? You don’t want peaks and valleys with energy levels dependent on the scoop, no? I sure wouldn’t. I’d want the same stable energy, pump, and endurance each workout versus being over-stimulated one workout and under-stimulated another. I want some consistency.

It makes you wonder why brands don’t make single serving products for consistency sake. Well, I can tell you why. It’s SUPER expensive to do so. I brought this up when I was at MET-Rx because I noticed that when I wasn’t shaking the tub up well enough, I could tell something was a little off once the product kicked in around 20-30 minutes later. I was either super jacked up or I was sitting there wondering when it was going to kick in. So, I asked them how much more it would cost to produce a product that came individually packaged where all you would need to do is grab a packet from the box or tub, tear it open, and dump it into your shaker bottle. The costs associated with doing so were through the roof. Understandably, that’s why we don’t see individual packets being sold these days. Also, think about meal replacement packets. They’re expensive, right? Way more than similar products in tubs with a scoop. It’s because they are each individually packaged which drives the price up.

I have a friend who owns a supplement company and he started out individually packaging his supplement line. It eventually got to the point where financially it didn’t make sense anymore as his margins were so low just to compete with other products, that he too was forced to put everything in a tub. He even started out his business marketing the product that you KNOW exactly what you are getting with each dose and building his business off of being 100% transparent and consistent and helping people understand the downside of buying a product that is just tossed into a tub and shipped to your door.

Bottom line is, shake your powdered supplements if you want them to mix properly so you get consistent dosages with each scoop. Obviously, you would want to take the scoop out of the tub before you shake the heck out of it, otherwise, you’re going on a treasure hunt to find your scoop.

Hopefully this was helpful and made you think about your supplements a little differently. There are positives and negatives to everything. When it comes to powdered supplements, the negative can be subsided by shaking before each use.