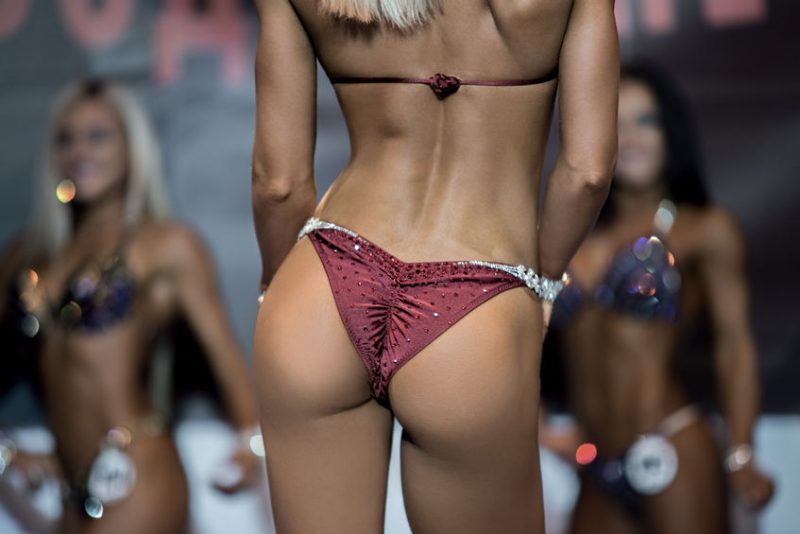 As I’m sure the entire world knows by now, I’m a huge fan of physique-based sports, and there’s no where better to compete than the NPC and the IFBB Pro League. Fitness has a great deal of relevance in today’s world, from sports, to health, to improving emotional well-being. Even the mainstream media has largely changed its tune, giving the gym, healthy eating, and even sports-based, natural supplements a whole new look. For many, taking charge of their lives is key, but others seeing the body transformations in the mirror isn’t enough. There comes a point in time when they want to get a suit on, stand among the very best in their city, state, and sometimes even their country, and be assessed by a panel of judges who can pick the best.

For the men, each of the three divisions gets a healthy amount of competitors, but for the women, it’s quite a different story.

The Bikini Division is the most popular, particularly for women getting into lifting and eating clean for the first time. Figure is the second most popular and attracts a nice combination of slightly more muscular competitors; it’s also a great place for women who may want to put on more muscle. Women’s Physique is the third most popular, but that’s not saying much. The drop from Bikini to Figure is noticeable, but the drop from Figure to Women’s Physique (in terms of competitor entries) is massive. Women’s Fitness and Women’s Bodybuilding are both on life support, at best, locally and regionally. Nonetheless, this article isn’t about the number of competitor entries. What I’d like to do, is go over each division, and give my take. Do I have a favorite division? I guess you’ll have to read the article to find out.

The first division, the flagship, is Women’s Bodybuilding. This division started it all and continuous to be one of my favorites. My favorite champion is 2005 Ms. Olympia Yaxeni Oriquen. She’s my favorite because she hails from Latin America, she’s a mom, and has worked tirelessly her whole life. She got started as a fashion model and fell in love with weight-training and competing. Many of the best women bodybuilders never thought they’d ever look like that, but they fell head over heals in love with the sport. The division itself has had many great champions, who inspired women to lift and feel good about themselves. There are, unfortunately, stupid men who feel that these ladies are “too muscular,” but those same haters pay big bucks just to get an autograph.. Anyone who loves bodybuilding, will love it on a man or a woman, because it’s all about muscle, conditioning, and symmetry.

Women’s Bodybuilding has also stayed the course; its competitors are diehards who refuse to stand down and go away. For as much as the detractors have tried to bury it, the sport is experiencing a renaissance. Once again, brave/innovative promoters are offering it on their contests, and the press is slowly but surely catching on. It’s definitely a work in progress, but I’m confident the division will come back once again – even at the Arnold and Olympia!

Women’s Fitness, however, is dying at the local and regional level. Sometimes, it’s a blessing to have just one competitor; however, more often than not, the quality is rather lackluster and the fact so many ladies are getting nationally qualified (by default) is taking it’s toll at the national level.

Fitness is unlike any other division – for either men or women – because it’s not solely physique-based. In order to do Fitness, competitors must be dialed in, much like a Figure competitor, but they must also create and execute a very rigorously demanding routine. These routines also require a foundation in dance, gymnastics, and some even know ballet. Everything comes into play to make for a truly entertaining, artistic performance.

Sadly, you can’t expect an athlete operating on a restrictive caloric diet to nail complicated, taxing fitness routines without some risks. Injuries are very common and the body is put through incredible stresses despite only having peak weak calories and often times coupled with a lack of rest. This is without a doubt the most difficult of the five women’s divisions. That having been said, it’s also a huge fan favorite, as the routines deliver a great deal of excitement to a competition. Sadly, the future of fitness at the local and regional level is in doubt. Yes, it’s big nationally and at the pro level, but if the bottom gets pulled out, there won’t be a national or pro level to speak of.

Women’s Physique is a great division that’s given muscular women an opportunity to compete at the biggest stages in the sport. It’s offered at both the Arnold Classic and the Olympia, but with the exception of a few competitors I’m really supportive of, I’m not a huge fan of WPD. Although I know it wasn’t created with the intention of further pushing Women’s Bodybuilding aside, I feel like that was exactly what happened. The Division itself got off to somewhat of a false start, enjoying a huge amount of fan interest and media love, thanks to the inaugural reign of Ms. WPD Olympia Dana Linn Bailey. DLB was a great ambassador, but never had any business defeating Juliana Malacarne. Juliana buried DLB and dominated the sport until the point she decided to retire. Under Juliana, the sport saw a huge change at the Arnold, and media attention practically died off. Many of the amazing ladies who competed alongside DLB, didn’t last much longer after she left, either. The spotlight was gone.

Also many Women Bodybuilders dropped down to WPD, thinking they’d have a field day, only to find out, they took some pretty horrible placings. I believe this was because many of the former Women Bodybuilders brought in scaled down physiques, having lost substantial amounts of muscle, and found themselves competing against ladies who trained from scratch with the WPD look as their ultimate goal.

Figure, I’ve always liked. It represents a very good look for the competitors; there’s some muscle, some definition, and the poses are very classy and sophisticated. The suits are great to look at and the competitors tend to come in with great conditioning. This is a popular division at all levels and draws a considerable amount of positive media and sponsorships.

Bikini is the hands-down most popular of all! The bikinis themselves are constantly being reinvented, with designers really showcasing their endless creativity. The supplement industry loves the division and many of the best champions go on to having successful careers in fitness modeling and even acting. The downside is that because there’s so many competitors, it’s very difficult to go pro. I know what you’re thinking – it’s probably the complete opposite to what I just said, but you’re wrong. While Bikini has a ton of contests where pro cards are earned, the sheer number of competitors makes that feat extremely difficult. Physique-wise, the division is a perfect inroad for the mainstream market and it allows for women of all walks of life to have a try at competing.

All in all, I think my favorite division is pretty clearly set out; however, each division has a lot to offer. I hope that aspiring competitors do their homework and pick a division based on what they like, not what’s popular, and most certainly NOT on what sexist jerks have to say. We have but one life to live, SO LIVE IT!

I hope you enjoyed this article. Please leave your comments here at Iron Magazine or wherever you may see this article. Thanks for reading.

I hope you enjoyed this article at Iron Magazine. Please leave a comment, whether here or wherever you may see this article. Thanks for reading.