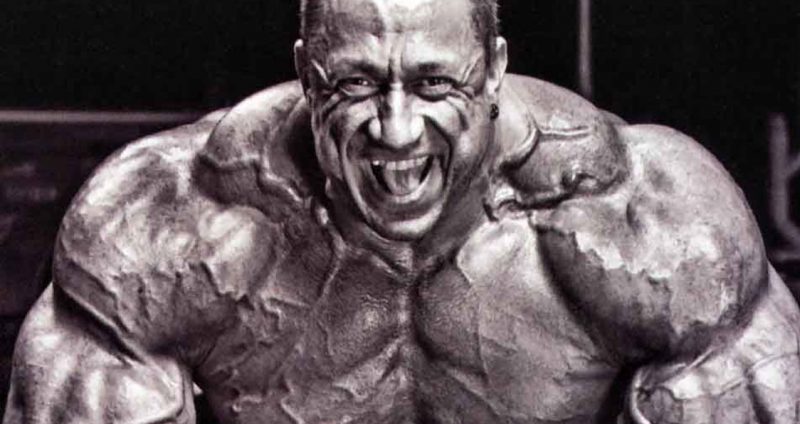 The song Du Hast by Rammstein plays, you think of a series of videos that went viral on Youtube, back when YouTube was new to the world. You think of the many scenes in that clip of clips, whether massive Ruhl pushing a tiny, albeit normal-sized, shopping cart through a supermarket of stunned patrons, and/or you think of images of crazy lifts, his beautifully-jacked-then-wife, or you see him in the parking lot lighting up a Marlboro or taking the stage – bringing the whole house down. These are long lost images of a long lost time. There was a great amount of mystique, though no one would probably have called it that then – or now.

Ruhl was a rugged, punk-cut, muscle monster hailing from Frankfurt, Germany. For the record – and Germans will probably know what I mean, but there’s two types of Germans (at the very least); those who look like Arnold and Gunter and those who look like Markus. There’s model types and then there’s the type who could hold off an army with a couple boxes of ammo over each shoulder, while firing an M60. I’m sure you can tell which is which. The truth of the matter, is that Markus Ruhl had the look necessary to stack up against the dominance of Ronnie Coleman, the silent but dangerous threat from Jay Cutler, and the whole cast of colorful, eccentric, and over-hyped American bodybuilders of the day. Markus’ heavy accent, his tough features, and clearly European mannerisms made him stand out. He wasn’t looking to Americanize himself and he always made a point to keep a German website, speak directly to his German fans at all times, and keep it 100. This is probably why, to this day, Ruhl is a legend worldwide and something of a God in Germany. Fans today miss Ruhl, they want someone like him, but I think it’ll be a long time until we see another Das Freak of this magnitude.

There’s a camp of believers that the internet is the end all and be all; however, for bodybuilders who made it before the advent of social media, there’s a very powerful nostalgia effect. Markus Ruhl became a household name at a time when magazines were still running at full force, where you could walk into any drugstore, book store, or airport kiosk and have your choice of 2-4 of the biggest bodybuilding magazines. Interestingly, at least one writer of each these powerful print giants, had an interest in Ruhl. Imagine that, one athlete, written about, alluded to, or photographed (some months) in every major print publication – not to mention in a land not his own. That was the power Markus had, but then also factor in the net. In the late 90’s and more so in the early 2000’s, more people were getting online, starting MySpace pages, visiting message boards and talking bodybuilding. It was the best of both worlds and everyone was impressed with the last of the dying breed who trained like Dorian but wanted to look like Ronnie. It got to a point where the only big guys on stage, were Ronnie, Jay, and Ruhl. Most guys wanted to eat less, train lighter, and/or use less supplements. If you could win without looking like monsters, many bodybuilders of the day took the pretty boy route over the gnarly road. But hey, all the better for Ruhl.

Sadly, the early 2000’s also signaled the beginning of a wave of political correctness that’s overcome the sport to this day. Political correctness isn’t a mindset that’s taken hold in bodybuilding alone, rather, it’s everywhere. Rockstars no longer get high, they don’t smoke during guitar solos, and if they drink, maybe it’s a light beer and only on weekends. The world has become very boring and very few people want to take any risks anymore. Why take risks, if you can be successful being boring? I’d like to say behaviors have changed and physiques now do the talking, but that’s not an accurate statement, either. The 90’s presented the best physiques, so it’s not like people are being entertained by the sheer greatness of muscle today, because that’s not the case.

Fans want someone like Markus Ruhl, they want another King Kamali, another Shawn Ray, but today, most bodybuilders – particularly those at the very top – don’t want to make waves. Why make waves when you can be successful and being unimaginative? Do you see the pattern, yet? The more we resemble each other, in terms of thought, dress, and mannerisms, the more our individuality gets lost. Uniformity is boring, it’s also the fasted route to the New World, oh nevermind. The point is, fans want characters, they want people that stand for something, people who live life the way they’d like to, but may not be able to; people want stars again!!

So the question is, will there be another Markus Ruhl? I don’t know. Plenty bodybuilders are married to bikini and figure competitors, but two jacked bodybuilders as a couple? That’d be interesting. Two jacked bodybuilders actually in love at the time, supportive of each other, and seen everywhere together – that might be something. A bodybuilding couple that makes jaws drop, a bodybuilder who places Top 5 with the pretty boys and makes the crowd stand on its seats, screaming to the top of their lungs, that’d be something cool to see again. With the exception of the brief exchange at the 2014 Olympia, bodybuilders no longer bump into each other, try to force themselves into pose offs, and/or battle at the press conference. In fact, you’re lucky to see a forearm nowadays – because the stars would rather not get all worked up – I mean who wants to have an elevated pulse? The comatose pulse is just so much more enjoyable, right?!?! LOL.

I don’t know about you, but if we had Markus Ruhl, King Kamali, Lee Priest, Nasser and Shawn Ray in bodybuilding just for a couple months, the sport would experience a major renaissance in terms of magazine, ticket, and supplement sales. Man, just two months, maybe even two weeks. Maybe it’s nostalgia, maybe it’s just me being brutally honest, but I miss the old days and the young guns are clueless to how cool being a fan was just a few years ago. Then again, things aren’t so bad now, either. Bodybuilders today have some pretty mean recipe videos on how to season your greens, where to get your best pretty boy haircut, and great tips for keeping Jordans in boxes, buried in your closet, clean.

I hope you enjoyed this article. I look forward to reading your comments, here at Iron Magazine or wherever you see this article.