DAVID HENRY IS BACK!! (BUT WAS HE EVER GONE?) 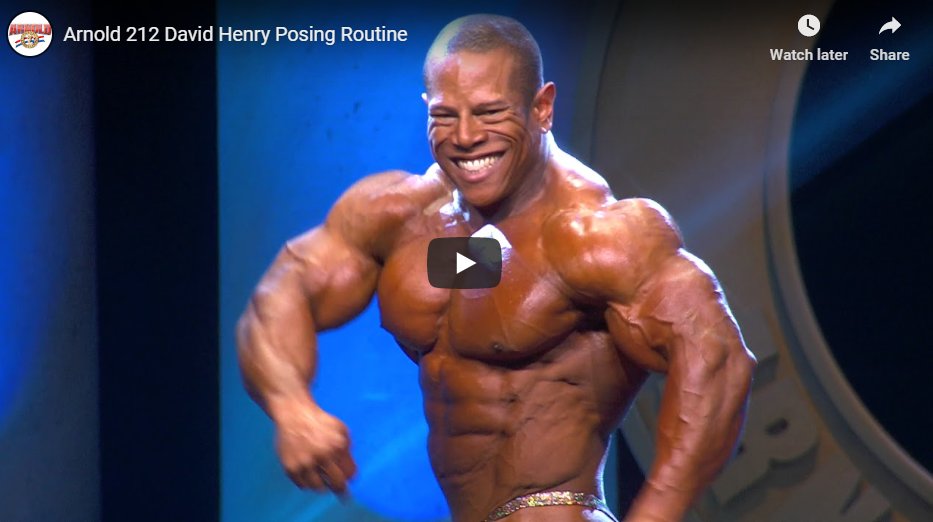 2019 was my first ever Mr. Olympia. After covering several Arnold Classics and pro and amateur shows all over the country, 2019 was the very first time I made the trip to Las Vegas, with a press pass, and ready to do interviews. I had a blast and got some great interviews, including with new Mr. Olympia Brandon Curry. I can’t say enough about the contest, always described as the “Superbowl of Bodybuilding.” One memory that sticks out, though, was the Olympia Meet & Greet.

I remember seeing all the big stars in the sport, each with a booth, each selling their 8×10’s, signing autographs, and all (for the most part) getting press. One bodybuilder I ran into was none other than David Henry. I’d been reading about him in the magazines for years, had had many good interactions with him at the Arnold Classic, and was happy to see him in Vegas. Anyone who knows anything about the sport of bodybuilding, knows that David Henry is one of the heaviest hitters out. He dominated the 202, dominated the 212, and had stellar placings in open bodybuilding. He’s also considered by many as being one of the most legitimate giant killers of the past decade. In fact, many of the industry’s best writers, have consistently compared his back development with that of the G.O.A.T., 8x Mr. Ronnie Coleman. With all that said, I couldn’t help but notice that some of the biggest names in the 212, guys like Ashkanani, Correa, and David Henry were basically being ignored by the media. Maybe my observations were off, so I inquired, and sure enough, David thought the same. Surely, it was a timing thing, right? I figured maybe I had arrived too early, so for sure, the media coverage would change later in the event. After the Olympia, a couple weeks later, I penned a blog on this topic, and several of the guys said there was a virtual media blackout. It was an interesting state of affairs for the 212.

2018 was a very interesting Olympia, because it signaled the retirement of 212 Olympia Showdown champion James “Flex” Lewis. The Welsh Dragon had dominated the division’s highest event and with his retirement, all eyes turned to his main challenger, Derek Lunsford. Derek was deemed the main challenger because of a very impressive 2017 and 2018. Lunsford turned pro in ‘17, got his first pro win, and debuted Top 5 in his first 212 Olympia Showdown all in that year. In 2018, he’d take runner-up to Lewis, while many, particularly in the media, thought he’d topple the champ. As a result of such a huge year, the press turned almost all its attention on the young, rising star. What ever attention was left, was reserved for the bleak possibility that Iranian sensation, Hadi Choopan, would finally get his visa approved. When Choopan was able to finally get this opportunity, he announced he’d be competing in Open Bodybuilding, so that sealed the deal for the 212. Shaun Clarida got some press, but for the most part, the biggest stars in the division were ignored.

I interviewed David and then wrote a blog about him afterwards, because I believed him to be as big of a threat in 2019, as ever before. The fans also never skipped a beat. The very mention of David Henry, on message boards or social media, gets immediate response from diehards of the sport. He’s got their interest and respect. So why did the media overlook him?

Quite frankly, I think a lot of writers have short memories and they’re all too eager to send older competitors to the glue factory. It’s like any athlete nearing – or God forbid over – 40, needs to retire, in their minds. I’m not sure why, but there’s writers who have been predicting Dexter Jackson’s retirement for the better part of 10 years and The Blade has continued to win huge titles and put the fear of God in younger competitors who think his best days are past him. Any writer, pundit, or news reporter who’s worth their salt, never ever leaves Jackson out of the predictions. Sadly, most media outlets totally ignored some of the biggest stars of the 212. Maybe it was age or maybe it was something else, but they totally ignored these great champions.

Also, just for the record, the athletes have no control insofar as what direction the media takes. Sometimes fanfare can be akin to a curse. I, personally, think that all the pressure the media put on Lunsford, took a substantial toll on his prep. Derek didn’t want to be the heir apparent and even if he’d told them the press to stop, we all know they wouldn’t have. I’m sure he would have liked to see guys like David Henry get their fair share of the press, but that just didn’t happen.

What I also find very interesting, is that David just won the Legion Sports Festival pro show this past weekend. He’s now Olympia qualified, having won California’s biggest pro show, and got the win in a deep lineup. This wasn’t some obscure contest. It was promoted by heavy hitters, had a big-star emcee, and packed the house full of fans. Also, one look at Henry’s physique, says it all. Also, just watching a few moments of the posedown, is enough to see just how much heart Henry brought to the stage.

So now, the big question is, how can the media ignore him for the remainder of 2019 and onward to 2020? Will he now once again be considered a potential candidate for the 212 Olympia Showdown title? It must also be incredibly awkward for the pundits and experts who basically wrote the legend off. I hope they start congratulating David and begin the process of offering him spots on various radio and online tv shows. This is a champion who is by no means done. He’s not looking to bow out or hang ‘em up any time soon. I hope this huge win in Long Beach, will help cement his position, moving forward. What happens next is anyone’s guess.

David has always done very well at the Arnold Classic, but now that the 212 is no longer being offered there, does he try his hand at the open (where he has been successful – both in Columbus and Vegas), does he find more 212 shows on the calendar, or does he hunker down and take the whole year to explore guest posings, working with companies, and focusing entirely on the 212 Olympia Showdown? That’s one of the perks in qualifying this early. While everyone else starts to panic as the big day starts to near (over the summer), the early birds who got the worm, can focus on diet, training, supplements and keeping the stress down. That’s why I think guys like David Henry, Nathan De Asha, and Cedric McMillan are geniuses for having done great shows even before the close of 2019. It will afford them a very productive 2020 where all they have to do is prep for the 2020 Olympia Weekend.