Dorian Yates Puts Industry on Blast, Did You Actually Listen? 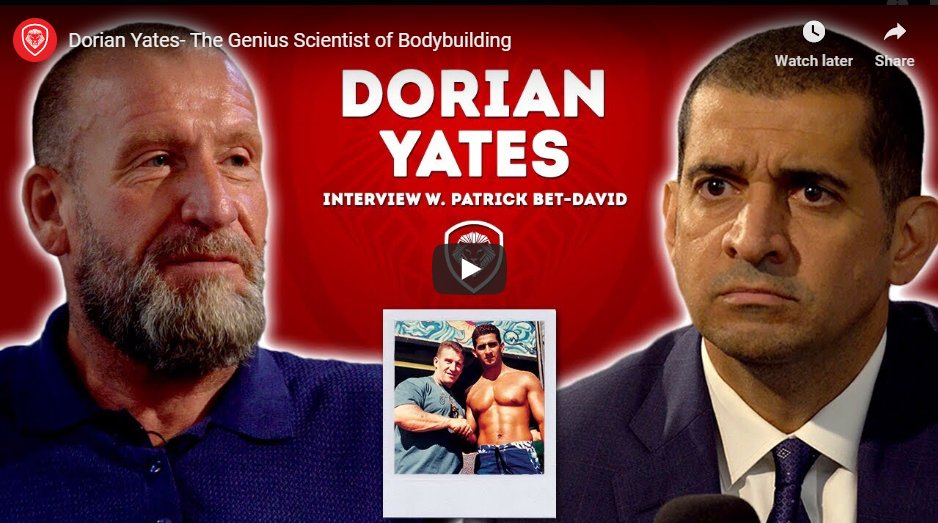 Dorian Yates appeared on my favorite YouTube channel, Valuetainment, where he was asked several interesting questions regarding bodybuilding and the state of the industry. The bodybuilding community all of a sudden was in an uproar questioning how Dorian Yates, a legendary bodybuilder, could be so critical of current bodybuilders among other sensitive subjects.

In this article, I want to break it all down and voice my own opinion. Also, my first question to everyone is, “Did you actually WATCH THE WHOLE INTERVIEW or did you get suckered into some of the clips that were pulled from it?”

Did Dorian Yates Call Out the Bodybuilding Industry?

Patrick Bet-David, one of my favorite people to watch on YouTube, sat down with Dorian and asked him question after question for over two hours and caught the raw and unedited responses on film. It in he appeared on his YouTube channel which is geared more towards business and entrepreneurship.

Now, I want to preface this by saying, this isn’t the first bodybuilder he had on his show. In fact, Patrick had none other than Phil Heath, himself, on the show. If you missed that episode, I highly encourage you to go watch that as well.

But did Dorian really call out the bodybuilding industry? Were there shots fired as he sat back and fired off his answers to the questions being asked? In my opinion, no. Dorian didn’t say anything that I feel others aren’t already concerned about.

When asked if Dorian thought Brandon should have won the Olympia, he stated his opinion. Brandon won based on the people who were on stage but he feels that none of the competitors truly came into the show in shape. Was he wrong? I don’t think so. Many of the guys on that stage (again, in my opinion) didn’t look like they wanted to win the Sandow. They were soft, watery, and weren’t nearly as conditioned as years past. However, we can say that about the last few Olympia’s. This year, Brandon only needed to beat who was on the stage, not what competitors looked like last year or even 20 years ago.

Dorian was also asked about the drug use in today’s competitors and again he spoke his feelings that they are using way more than they did back in the day. Was he wrong? I don’t think so.

There are even people who are mad that Dorian threw some shade at Wheeler, saying if he worked as hard as him, he could have been unbeatable. As you listen further, he gives praise to Wheeler regarding his physique and his statement was merely his opinion. And who knows, if Flex did train like Dorian, maybe things would have been different – but we’ll never know. This is the same type of comment Dorian made about Levrone taking months off at a time and then trying to get ready to jump on stage versus staying fully committed year-round. These are all unknowns that cannot be answered, only speculated and discussed.

I, personally, don’t see where everyone is up in arms acting like Dorian was calling anyone out or throwing shade. He answered the questions honestly. Heck, I respect his answers more than I do the song and dance we get when Kai is trying to answer direct questions. I mean heck, 99% of the time I don’t even know what he’s talking about. I’d rather someone be a straight-shooter and give actual answers to questions.

Why Is Everyone So Mad?

If you watched the entire interview (yes, I know it was long), you would have seen the depth of Dorian’s answers. I didn’t take anything he said as being negative. For one, some of the things were his opinions – and we all have the right to our own opinions. And two, he’s looking through the same competitive lens he had when he competed. So, can we blame him for what he sees? Last I checked, none of us have even one Sandow on our mantle.

I tend to agree with just about every comment he made during the interview. I do see a drastic difference in the conditioning of bodybuilders these days. That being said, I also understand that this is a new era of bodybuilding and that changes have been made and the sport is evolving. We don’t see guys on stage who look like Yates, Levrone, Ray, and Wheeler. Then again, we don’t see guys on stage like Ronnie or Jay either. But do you know who we do see? Heath, Rhoden, Ramy, Dexter, Curry, Bonac, Cedric, and all the other current bodybuilders on stage today.

Because there’s a difference that doesn’t mean one is better than the other. That’s like saying football in the ’90s was better than the teams and players we see today on the field. It’s simply DIFFERENT. Love it or hate it, the times have changed and sports have evolved.

Where Do We Go from Here?

I think everyone could use a breather. Let’s all sit down, hold hands, and sing a little song. No seriously, this whole thing was blown out of proportion. Again, I encourage everyone to watch the entire interview. It’s full of a ton of great insight, memories, thoughts, opinions, and stories from back in the day.

Dorian talks about people he got along with, people he didn’t, and how he got roped into attempting to get in a fight with Lee Haney – which is actually hilarious. The entire interview is extremely entertaining and I think if you had an “issue” with what you “heard,” after watching the entire interview your perception may change.