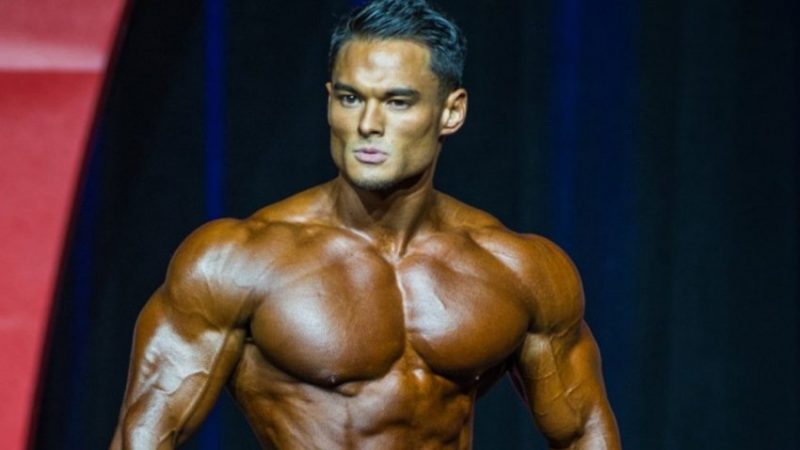 It really seems as if physique-based sports are falling prey to becoming the next frontier of the world of political correctness. It seems that any attempt at comedy could easily result in a feud. Even discussions based on generalities could lead to drama. Ultimately, each person has their own opinions and outlooks – we’re all different and that should be fine.

I think something also needs to be said about entertainment. People nowadays want something more. Now more than ever, it takes a lot more to entertain a crowd, to win and keep an audience’s interest, and to really have a hit performance – whether you’re playing a rock concert, performing in theater, or guest posing. That last one is what this article is all about. So here goes, a pro bodybuilder, Antoine Vaillant, guest poses at a contest, he hits the stage in men’s physique board shorts, and goes through a men’s physique routine. The crowd loves it, they’re entertained, and Antoine brings in a quality look. Everyone seems happy and it looks like another successful contest has run smoothly; however, Jeremy Buendia, an MPD Olympia champion and highly decorated pro, takes exception. Buendia takes a series of digs at Vaillant, makes the point that MPD is more popular than bodybuilding, and asserts that MPD competitors are also far more in demand. It’s a very bizarre reaction, especially because it doesn’t seem that Vaillant was looking to mock the division or its athletes, he was merely doing a posing routine and wanted to entertain the audience. So here are some questions I feel are warranted to ask. For starters, did Buendia act correctly in taking Vaillant to task? Two, is political correctness good or bad, and finally what, if anything, will this online feud do for the sport?

In all honesty, I think Jeremy jumped the gun. I think there’s a lot of overlap between him and his friend, Phil Heath. Hyper sensitivity is alive and well in our industry and that coupled with political correctness, isn’t going to be doing anyone any favors. The truth of the matter, is that guest posings are supposed to be fun. You have an audience who’s seen hundreds of competitors, doing quarter turns, hitting mandatory poses, and being scored and photographed; this is fun to many of us, but it’s also great to have an intermission, stretch your legs, and do some shouting and cheering. For years, promoters have invested a considerable amount of their resources into flying out talent, putting them up at the host hotel, and giving them the superstar treatment. They do this because they want to give back, they want the audience to really enjoy the production. When a guest poser is boring, that’s failure. When a guest poser puts some thought into his routine, has some originality, that’s just what the doctor ordered. Antoine Vaillant could’ve just come out and posed to some music, hit some mandatory poses, put his hand to his ear and done his best Hulk Hogan routine. That’s old hat, everyone does that, and quite frankly, it gets old after a while. In many cases, having the right guest poser could mean more competitor entries, more ticket sales, and more buzz on social media. There’s a lot of thought that goes into finding the right athlete. In the end, entertainment is scarce when it comes to finding the very best. I’ve watched the routine in question various times and I think it was a huge success, but I’m still not clear why Jeremy Buendia got so hell-bent on it. And also, why is it that no one else from MPD felt the need to lash out – I think that, too, is very telling.

With regards to political correctness, I don’t really see a value for it. If we’re discussing universal issues of right and wrong, I think we can all agree what’s appropriate and what’s not. This whole crusade about catering to everyone’s feelings, has a tendency to border on the ridiculous. It’s getting to a point where being PC is draining the fun out of everything and serves no purpose, expect maybe to annoy a lot of people. If a bodybuilder wants to guest pose in board shorts, what’s the big deal? It can’t be any worse than Kai Greene guest posing in bondage gear, right?

Feuds, in general, are counterproductive; however, online feuds are even worse. These cyber wars spill over into the message boards, memes are made, and the trolling takes on a life of its own. Fans love nothing more than to keep the ball rolling. Many times, fans just want to argue – about something, anything. We saw what online feuding did for the Men’s Physique Division – absolutely nothing, so the bigger question would then be, why start them? Why don’t people meet up to talk 1:1, why don’t they place a call or send a text message, why resort to online, public attacks? On the one hand, I want to preach indifference, but it’s hard to do, when I’m writing an article. That being said, I think the less attention this story gets – the better. Truthfully, I’m shocked at just how silly the industry is getting when it comes to folks feeling their feathers have been ruffled. Get over it, people!! Live and let live and please stop seeing negativity everywhere and thinking you know what others are thinking – because you don’t.. Unless someone intends to mock a division or unless someone directly makes it a point to attack you, then chances are, it’s all in your head. Hopefully the drama dies down, but we like to keep our readers up to date on what’s going on in the world of bodybuilding and when a 3x MPD Olympia champion blasts a fellow competitor, especially at this level, I’d be remiss if I didn’t cover this developing story.

I hope you enjoyed reading this article, here at Iron Magazine. Where do you stand on the issue? I look forward to reading your comments, whether here or wherever you may see this article.