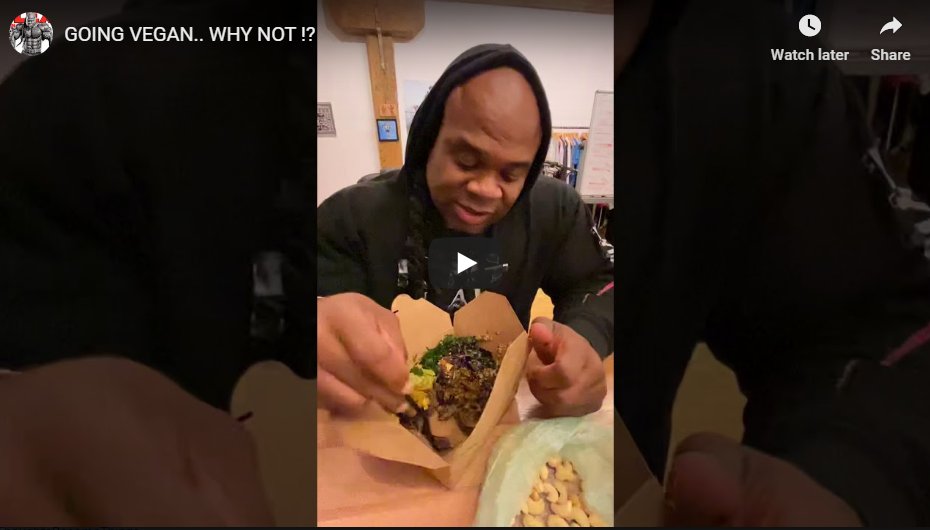 Kai Greene remains one of the most popular bodybuilders in the world. He’s a guy who won every title imaginable, with the exception of the Olympia, and had the career of ten men. Even at the height of 7x Mr. Olympia Phil Heath’s reign, Kai was aways more popular. So why was that? The reality of the matter is that Kai was popular, loved, and respected because he was real. If you remember his videos with Palumbo, Pulcinella, and the various magazines, The Predator wasn’t a Hollywood jetsetter, he didn’t live large, he was a guy who actually struggled.

Who can forget when Palumbo, then with MD, did a day in the life of Kai Greene. We got to see Kai’s NYC apartment, his walks to buy Dollar Store tuppaware, and his trips to the market. This was a guy who barely was making ends meet, but he was getting it done. In fact, more so than The Predator moniker, Kai always likes to call himself “Mr. Getting It Done,” but now a lot of that credibility may be at risk.

Kai Greene is at the center of a social media backlash over his recent decision to go vegan after watching The Game Changers documentary on Netflix. Upon watching it, Kai had a social media evolution, at first suggesting he’d look into veganism, then saying he was researching it, then finally openly stating he’d do it. That’s all fine and good, but what’s interesting is that Kai became an advocate, and some might even posit, a zealot, for the diet just after a few days of living this lifestyle. Key social media stars, took to the airwaves, suggesting that Greene’s motives may have been more based on financial gain, notoriety, and other reasons besides those of saving the planet. The truth of the matter is, that whatever Kai’s reasons for making the switch may have been, there’s been an enormous amount of social media backlash.

Bodybuilding fans are sick and tired of gimmicks. There’s gimmicks to eating, training, taking supplements and even drinking water. People are barraged with offers and programs, from their emails to sliding into their DM’s, to pop-up banners on sites they visit throughout the web. Most of the sales-pitches have some quack in a white lab coat or someone that looks like they’ve never lifted a weight in their lives. The fact it’s now Kai, is enough to make everyone who bought into his story of beating the odds, making something out of nothing, and going all the way to the top, doubt the whole the thing. And if they doubt the whole thing, then who the hell have they been following and supporting all these years? No one likes to feel like they’ve been duped.

Listen, I have been a vegetarian for over quarter of a century. I stopped eating meat because I care about animals and I don’t think it’s necessary to consume meat in order to live a happy life. When I stopped eating meat in 1994, there were maybe 1/10 the options we have today. I love the fact it’s so much easier now and I love the fact we have folks who abstain from meat, whether for personal or religious reasons, and they can do so while still being social. It’s great that restaurants, even fast food chains, have vegetarian and vegan options.

What rubbed me the wrong way, like many others, is that Kai could possibly be doing this for money. So what if he is, some might say. How would that be any different than signing a supplement contract and preaching that its supplements are the best, that they can part the sea, and that they help consumers do the unthinkable? I guess it really isn’t much different, but it just seems dishonest on a whole new level. It feels like the bodybuilding public is being duped and duped by a guy that’s always been marketed as, The Last of the Mohicans.

In the end, are we really going to know if Kai is keeping a vegan diet? Will he be able to keep the same size and strength? Who knows? Will he ever compete again? No clue. What I also find a little strange, is that if he’s really gone vegan, what will that do to his supplement line? How can you promote supplements that you not only don’t take, but can’t take? Further, if plant-based is the better way to go, why are you selling and promoting animal-based to the public? Or maybe Dynamik will go totally vegan? Could this be publicity for that?

In the end, if Kai’s decision was one based on his own morals and principles, fine. If not, that’s fine too, but the one thing Kai has always banked on, even if he never won the Olympia, was having the respect and loyalty of the people. This move, right here, if not done for the right reasons, will only serve to hurt his credibility. The only real litmus test is time. In time we’ll see if this was all about cashing in or changing the way he lived his life.