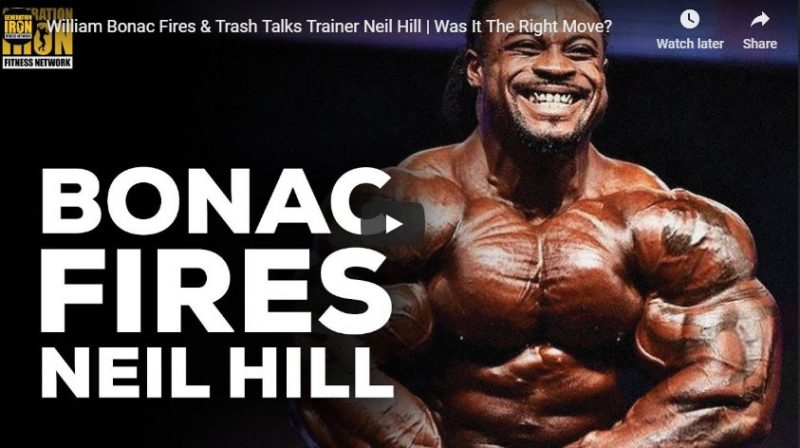 What happens when you have stars, drama, and social media? Well, it doesn’t take a rocket scientist to know the answer to that! There’s the world of bodybuilding and then there’s the fitness industry – they are not interchangeable. In fact, many legitimate influencers, may not even know who the reigning Mr. Olympia is. You know how big contests like the Olympia and Arnold have massive expos? Well, those who are truly just concerned with the fitness industry, may never go to the contest – they’re too busy networking, people-watching, and checking themselves out at the expo.

The two worlds interact, every so often, and usually it’s great when this is to grow the sport, recognize a great athlete, and/or to marvel over a new, groundbreaking innovation in sports science. The other time both worlds light up, is over drama. Drama is, perhaps, the single biggest pastime of both worlds and unfortunately, drama also yields hits for pages, views on videos, and bigger and far more engaged posts and stories on Instagram. This is why it’s always best to let angry people cool off, take some time away from each other, and hopefully the situation will improve. The closer the adversaries are, usually, the more time is required to let things go back to normal.

William Bonac and Neil Hill are brothers. They might (possibly) hate each other (now), but they’ve been through so much together, that these guys have a bond unlike any other in the sport. Some of the worst splits in the industry, have been between the closest of friends. When a close friendship goes south, particularly in the public eye, the social media vultures start circling and before you know it, it’s an all out feeding frenzy. That’s exactly what I think has happened here.

Initially, William Bonac made an Instagram video where he blasted Neil. That probably wasn’t the best way to end the relationship; he made a series of accusations and Hill wasn’t present to give his side of things. As soon as Bonac made the video, certain websites made it their business to not only disseminate the video, but also commentate on it. These are the circling vultures overhead, and as soon as one outlet “breaks the story,” then all the others dog pile on. What you then have, is nothing short of a snowball effect. If Bonac had made his statement and that had been it, then this whole thing may have simply gone away. Who knows, one of the two may have texted the other, maybe even then, the whole thing could’ve been brushed under the rug. Sadly, once the talking heads in the industry got involved, they couldn’t just stop talking about it. It became everyone’s business and everyone had to have an opinion. As soon as things appeared to be spiraling out of control, Hill probably felt compelled to find a big media outlet to tell his side of the story. Where Hill went, however, was interesting, to say the least.

Nick’s Strength and Power is the biggest bodybuilding channel out. There is no single Youtuber with a channel on that level. There are several pretenders to the throne, but Nick Miller is king. This wasn’t always the case, though. In fact, at one point, Nick was Luimarco’s protege. He was the runner-up, the second most popular, but once Mr. Propahh went on a self-imposed hiatus, Miller inherited the keys to the kingdom. Nonetheless, there was always a strong connection between the two. Now, as many of you know, there’s also history between Luimarco and William Bonac – really bad history, in fact; so when Hill gave his story to Nick Miller, that undoubtedly delivered an extra sting. He basically went to the protege of his former client’s mortal enemy and spilled the beans on the whole previous relationship. What’s worse, is that reports are surfacing that some of Hill’s candid revelations may in fact be off, but that’s not a discussion for this article. The bottom line is, war, now, seems inevitable.

Just like I said on this week’s edition of The Iron Duque Speaks and on today’s IG LIVE at @IronMagLabs, no one wins in a social media war. Fans of each adversary attack each other on the boards and social media, meanwhile the main figures in question grow farther apart. They also tend to get more hostile with each new interview, article, and/or media appearance. The worsening relationship also tends to hurt the sport, in general. That being said, there may be someone or something who does, in fact, benefit from this type of turmoil. The tabloid press – which is slowly but surely becoming the norm for Fitness Youtube channels – they win. Many of these channels, much like many of the aforementioned influencers who never leave expos to go watch actual contests, don’t really care about growing the sport or helping athletes. They’re not looking to inspire anyone; their goal isn’t to promote anything positive.. To the tabloid press, all that matters is hits, money, and notoriety. The fastest and easiest way to achieve these small-minded goals is to excel in the production of negativity – and that’s exactly what they’re doing.

So I ask you, where do we go from here? Have things reached the point where reconciliation is totally out? If not, could Bonac and Hill reconcile in time for the Mr. Olympia? If not, will Bonac have enough time to find a replacement? Or will he fly solo? These questions are just the tip of the iceberg. Please be sure to leave a comment wherever you may see this article. We, here, at Iron Magazine, want to hear from YOU!!

I hope you enjoyed reading this article. Don’t forget to use discount code IML15 to Get 15% Off at IronMagLabs.com.