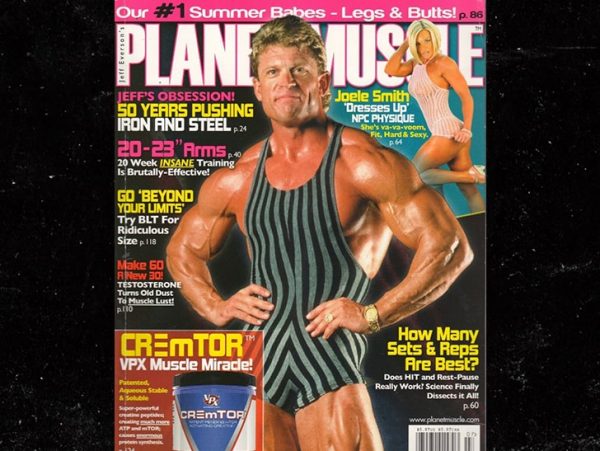 If you’re a fan of bodybuilding, then the name Cory Everson should ring a bunch of bells!! The 6x Ms. Olympia, is considered one of the greatest of all times. Her husband, Jeff, was a key part of Cory’s success on the stage and in the fitness industry. Although the couple’s fame was before my time, I pride myself on being a historian of bodybuilding. When you look back at the many covers that Jeff and Cory shared, it paints a very beautiful picture of what bodybuilding was then. Don’t get me wrong, I love where the sport is today and I especially love digital media; however, during their heyday, it was also very special. I really miss buying magazines and I really miss the excitement each month of seeing the new issues on the stands.

Speaking of magazines, Jeff Everson also gave us his own magazine, Planet Muscle. I used to love reading that magazine, as it was a major break with the more standard type publications. According to Ron Harris, on the Muscular Development boards, Jeff had a PhD in physical education from the University of Wisconsin, where Jeff and Cory met. Although that factor may be surprising to some, it’s really not that big of news to me. Over the years, I’ve met many in the bodybuilding world who excelled in academics, had excellent educations, and chose the fitness industry as their future. In addition to being Cory’s husband and the owner of Planet Muscle Mag, Jeff was also a competitive bodybuilder, winning the prestigious Mr. USA title in the 1990’s.

What never ceases to amaze me, though, is just how hard people used to work years ago. In addition to everything already mentioned, Cory and Jeff also had a very successful clothing line, called Sampson and Delilah. Planet Muscle also focused released various video series promoting health and fitness, as well giving muscular women the respect they deserved. One can only imagine how much bigger Jeff and his generation would have been, had they had the seemingly limitless reach of the world wide web.

In another article I read, in preparation for this article, Cory Everson faced medical issues with blood clots, she said Jeff camped by her side for weeks, until she recovered. What a classy guy. Nowadays, love means a lot of things to a lot of different people and often times, people walk their separate ways after a divorce. That was not the case with Jeff. When Cory’s health was in question, despite having been divorced for more than a decade, he was right there by her side. That’s real love, doesn’t get any more real than that.

Other articles I’ve read, coupled with my own knowledge on this great man, brings me to some of his more critical stances (e.g.on supplements). Anyone who does a quick keyword search on “bullshit and supplements” will see Jeff’s name pop up. I can’t speak to the supps of the 1980’s, but it seems Jeff didn’t feel they were worth much; nonetheless, he stated on many occasions that 50% of his revenue during the era, came from promoting useless products. I could see why Everson was such a rebel, both from his publicly-stated views to his revolutionary bodybuilding publication.

Just recently, the bodybuilding world lost the great Ed Corney, now Jeff Everson. At least in Ed’s case, he lived a long, fulfilling life. Jeff, on the hand, passed at 68. I don’t know about you, but 68 seems young to me. In any event, the reporting of his death has been done so in a classy manner. I hate to pass judgment on other publications, but generally whenever TMZ is involved, there’s a proverbial stirring of the pot – usually stoking the flames of sensationalism. Thankfully, none of that has happened here.

In conclusion, I hope that we continue to celebrate Jeff’s life throughout the net – for the folks who grew up with him and the fans who are learning from the pages of history. All in all, this was a great hero of the sport. I hope you enjoyed reading this article, here at Iron Magazine. I look forward to reading your comments.