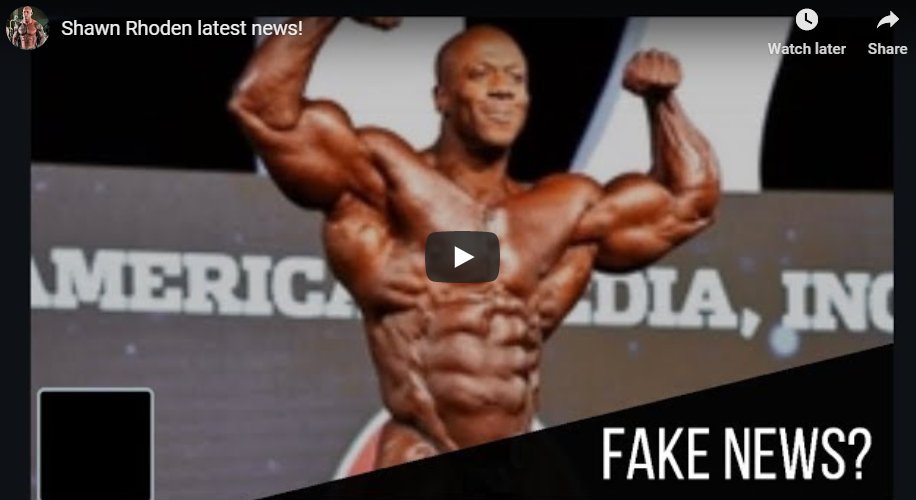 It seems the world of bodybuilding and fitness underwent a week of chaos as big channels were reporting that 2018 Mr. Olympia Shawn “Flexatron” Rhoden hadn’t renewed his 2019 IFBB Pro League Pro Card, creating some questionable impressions. Even if this were the case, it simply means he cannot compete until he pays the fee, but it in no way, shape, or form means, that he’d lose his pro status or that he’d have to earn another pro card.

The reality of the matter is that the answer to this question is pretty elementary; however, in a world starving for news, it became a major talking piece. One channel, released a video that purported to reveal the answer but didn’t do so until nine minutes into the video. The truth is, we’ll never do that, here, at Iron Magazine. We gave you the answer in the first paragraph of the article, because we don’t believe in stringing our readers along. What’s more telling is the snowball effect when it comes to news reporting and conversation online. Why is it fake news spreads so quickly? You’d think with all the resources available at our fingertips, that inquiring minds could get to the bottom of stories with great ease. Nonetheless, gym locker rooms, message boards, and social media are replete with talking heads spouting all sorts of nonsense. It’s like When Harry met Sally, between Fake News and Clickbait, it’s a match made in heaven. Another reason why this story may have snowballed is because of the fact that Weider/AMI banned Rhoden from competing at the 2019 Mr. Olympia. Never before in the history of bodybuilding has that ever happened.

Many fans all over the world are ecstatic at the news that Rhoden and Ramy will be competing at the 2020 Arnold Classic. For many, they will get to see what they wish they would have seen at the Olympia. For a great many years, the Olympia has dominated the Arnold in terms of depth of lineups. Now, naturally, the Olympia should do this, because the Olympia is the top title in the sport; however, the Arnold is nothing to sneeze at, either. It has a substantial purse, huge bragging rights, and it’s the namesake of the most important, living, person associated with the sport of bodybuilding. Anyone who wins the Arnold, has a very powerful amount of buzz going into the Olympia. In years past, some Arnold champions have failed to capitalize their efforts in Vegas, but 2018 and 2019 have re-started the historic trend, as both Curry and Bonac have gone on to do amazing things on Olympia stages. With that being said, many fans would like to see either Rhoden or Ramy win big in Columbus, especially because it could set a marketing bonanza for a showdown with defending champion Brandon Curry in September 2020.

From another perspective, everyone is fixated on Rhoden, because when the news broke of the charges, it seemed everyone was talking, speculating, and jumping to premature (and baseless) conclusions. When Shawn got back on social, it was all about being positive, and he spoke absolutely nothing on the case. He did a fantastic interview with Nick Strength & Power, continues to train, and is now Arnold-bound. That being said, people are dying to know anything about the champ. Even people who know that not paying for a pro card on a particular year means little to nothing, even they caught themselves investing time and thought into this “news story.” I’m not sure if it’s simply human nature, boredom, or trolling, but people just started talking about this non-story all over the message boards and making reaction videos. It’s like people will make up news if they can’t access any of the real kind.

As far as 2020, I’m sure if Shawn didn’t renew his card in 2019, he will do so for 2020. Next year’s Arnold Classic will be a huge success. What i don’t know is if we’ll see Brandon Curry there. Now that might be an interesting new story to come. I doubt he’d do it though, because peaking twice (especially at that level) for a 1st time Mr. Olympia would seem very dicey. What’s also another good story to write is, what happens if Rhoden wins in Columbus, does AMI then revisit its 2019 position and let him compete in 2020? Technically, Rhoden’s case could still be going. And this is assuming that if AMI allowed Rhoden to compete, that he’d want to. The fact he was the first defending champion to be banned may require more than them simply letting him compete again. That being said, Shawn can win next year’s Arnold and win it ten years straight, but unless he wins the Olympia, he won’t be the best bodybuilder in the world, like he was in 2018. I’m pretty sure it won’t require much arm twisting to get him back on the biggest stage in the sport.

Think about this. If the Arnold not only allowed Rhoden to compete, but marketed his appearance (as they’ve already started doing), and they had one of the best contests in their history, wouldn’t that be at least a factor in getting AMI to reconsider for 2020? I sure think so. All of these things would be news and newsworthy, but whether Shawn renewed his pro card for a year in which he didn’t compete or not, that’s not news. Unfortunately, as I have often said before, we have an obligation here at Iron Magazine to weigh in on pressing matters in the bodybuilding and fitness community. So many people want to know what the ole Iron Duque has to say, so I’d be remiss if I stayed silent.