BIG RAMY GETTING DICED UP! 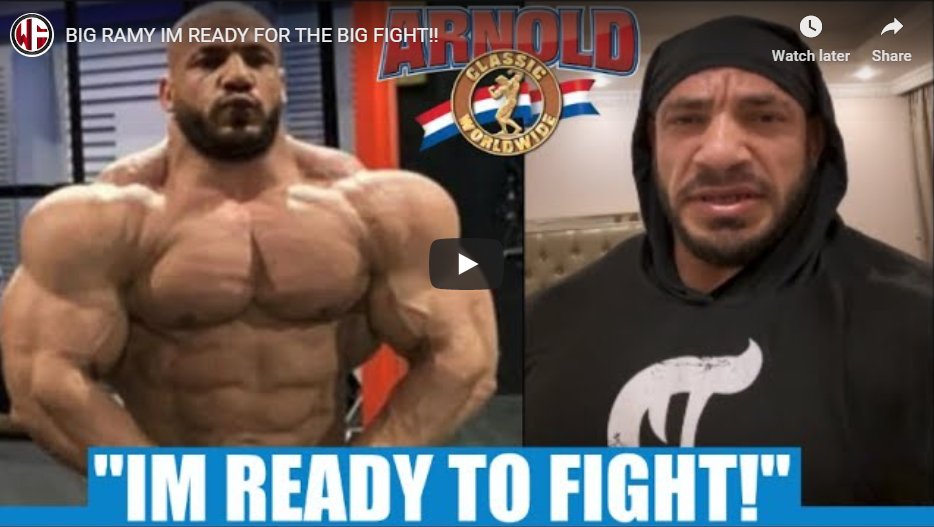 We’ve been hearing more and more about Big Ramy as he prepares to compete at his first-ever Arnold Classic in just under five weeks time. The truth of the matter is 2019 was a rough year for The Egyptian Phenom. In 2017, he was on top of the world, with a very impressive runner-up at the Mr. Olympia, giving then champion Phil Heath a pretty good run for his money. 2018 should have been his year, but it wasn’t.

2019 saw him miss the Arnold due to injury, miss the Tampa Pro, and as a result of that, he missed last year’s Olympia. Ramy also left The Camel Crew, opting to train with Neil Hill, but that never panned out. When Ramy announced he’d be doing the Arnold, there was some speculation as to whether he actually would. I have to admit, as much as I like him, I was a little dubious as to whether we’d see him. That’s just a factor that can’t be set aside. The longer a competitor is away from the stage, the greater the speculation becomes as to whether they’ll return.

Nothing speaks more to a competitor’s commitment to compete than progress shots. Historically, Ramy has been of the old school ilke, showing next to nothing as the contest approached. Back in the day, it wasn’t uncommon to see him in a sweats and hoodie way before hitting the stage. The strategy there, was to keep the competition (and even the media) completely in the dark. Most guys take it so far, that even press conference posedowns have become a thing of the past. With that being said, a photo has leaked of Ramy’s wheels, showing some very impressive separation and condition, some five weeks out from the show. That’s the name of the game with Ramy.

As it stands right now, the world is looking at two men, in what may become one of the most intense showdowns of all time. William “The Conqueror” Bonac vs Big Ramy. This has blockbuster written all over it. Bonac is the heavy, heavy favorite to win. In 2018, he won the title. In 2019, Brandon Curry beat him by the skin of his teeth. Bonac would again take 2nd to Curry, six months later at the 2019 Olympia. What’s very interesting is that both men, looked their best at last year’s Arnold. With Curry not in the lineup, it looked like a somewhat sure-win for Bonac.

A few months ago we all saw a very cool Arnold poster featuring Shawn Rhoden and Big Ramy, which went viral. When all of a sudden the poster disappeared and it became clear that Shawn, in fact, wouldn’t be doing the contest, many fans started to wonder if Big Ramy would be absent, too. The fans were devastated to be let down about Shawn, but had that also been the case with Ramy, it would have been a major blackeye for the 2nd biggest bodybuilding show on the planet. Thankfully, it seems at least one of the two will be in the mix.

While many of the faithful would love see Ramy hit the stage at 300+ pounds, the smart money would be on him continuing to fine-tune the prep, coming in as dry and vascular as possible. Ramy’s big issue has always been his hamstrings and glutes. If he can come in peeled and pose hard, he has a very strong chance of walking away with the title.

Ramy HAS to pose hard. This whole contest needs to be battle. Posing for the audience is great, posing for the cameras ain’t half bad, either, but great shots and accolades from the crowds, won’t seal the deal. The judges will most definitely have their work cut out for them, especially with young guns like Patrick Moore and veterans like Dexter Jackson bringing their best to Columbus. The judges need to see Ramy, he needs to know exactly how to best PRESENT his physique to that panel. This is a guy who by his very nature, is low key and humble. I’m not saying he needs to be loud and tacky, but he has got to pose perfectly, transition smoothly, and execute his routine flawlessly.

I, for one, think Ramy can win the Arnold and if that happens, he will have six months to prep for the Olympia. He’ll also ride one of the biggest waves to the biggest show in bodybuilding than anyone ever could. If Ramy won, Bonac would still be the recipient of a lion’s share of press if he took 2nd. As last year’s Olympia runner-up to Curry and potentially this year’s Arnold runner-up to Ramy in Columbus, he’d be a media favorite. The Olympia would be a Bonac-Curry rematch and a Bonac-Ramy rematch wrapped into one. If Bonac does hold off Ramy, but Ramy manages to take runner-up to him, he’ll have amassed a nice chunk of points to qualify and he’ll have a chance to rematch Bonac and potentially make a run against Curry. The truth is even a Top 3 at the Arnold would still be a marketing bonanza for the Egyptian superstar. So, whether he wins, takes 2nd, or even rounds out the Top 3, this would be a huge return for one of the most talked about bodybuilders of all time.

I don’t think there’s any chance of Ramy placing outside the Top 3. As with anything, all possibilities should be analyzed. I think he chose this show, with plenty of time to prep, and if progress shots are going out, he’s coming ready. There’s just no way, in my mind, that he finishes less than 3rd.

I believe Ramy’s place is on stage, doing battle, and taking advantage of every opportunity to win Arnolds and Olympias. I think he can totally do either or and I believe he’s an amazing ambassador for the sport. When Phil was finally toppled, that heralded in a new type of champion. Guys like Rhoden, Curry, Winklaar, Jackson and Bonac, created a positive atmosphere, where constructive criticism was not only acceptable, but encouraged. Ramy is exactly like these five champions with regards to their good sportsmanship, their philanthropy, and their love of the fans – all fans – even those who disagree with them.