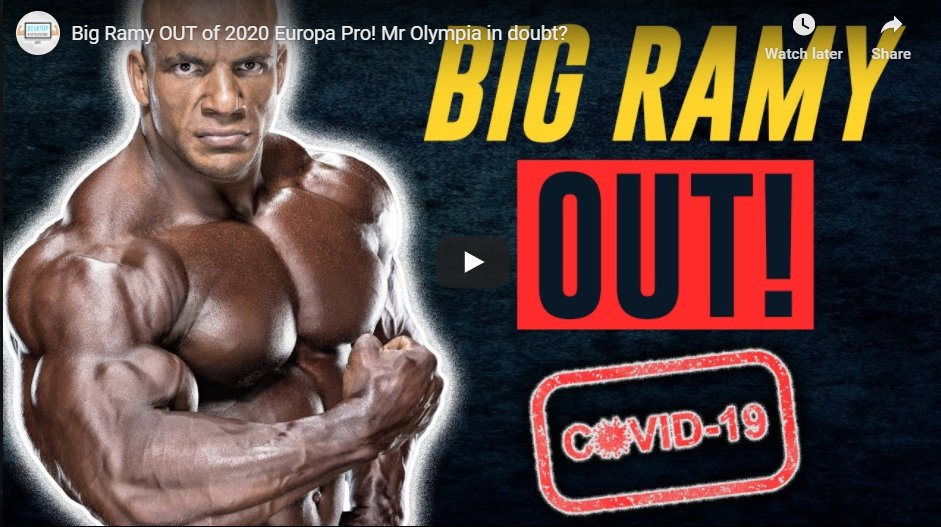 Just when you think this horrible virus is starting to go away, just when contests seem to be back on track, and the Olympia serves as the beacon of light, that light at the end of the [2020] tunnel, this virus rears its ugly head back out. As the fans started coming back around and the sport started to come back alive, more and more people started clamoring to see one of their favorite bodybuilders back on stage.

Big Ramy has been a favorite of the people for many years, really since he hit the stage, winning the NY Pro and all those years getting better and better. There was a time when Ramy could barely speak English, where he was largely seen as this really talented guy from Egypt, training in Kuwait, with a lot of potential. Even though he hadn’t really hit his stride, he got people excited.

Over the years, he always gave his fans more and more reason to get excited and he gained quite a few new supporters along the way. So with the contests coming back and The Olympia really upping its game, more and more fans yearned to see Ramy back on stage.

The biggest contest in bodybuilding will be held in December, at a much better hotel, on the Las Vegas Strip and with a new owner who really believes in the sport. With Brandon Curry looking to repeat his 2019 good fortune, there’s a shortlist of possible rivals who, if Curry came in off, could swoop in and become the new champion. When it comes to hype – no one comes even close to Ramy – and it’s not just hype. He’s a former NY Pro champion, he took runner-up at the 2017 Olympia and in 2020 he competed at his first-ever Arnold Classic in Columbus, OH, where he placed a very respectable 3rd to Dexter “The Blade” Jackson and William “The Conqueror” Bonac – two former Arnold Classic champions.

As for the rest of the year, it seemed like Ramy was done, but once again, things started to get more and more normal. A lot has changed since the very chaotic Arnold and the ensuing months. Once the Tampa Pro happened, the NY Pro happened, and the North American Championships followed through, the fans started getting more and more eager to see their favorite bodybuilders back on stage. The only problem is, by the time Ramy decided he’d try to get on stage at the Olympia, there were less and less shows. He was done to two contests. He could have done the Chicago Pro or he could have done the Spain show. In Chicago, only the winner qualifies, but in Spain, the Top 3 all got a qualification. Those odds were a lot more favorable. The only problem is, that’s the last chance before the Olympia.

Ramy was in the game. With The Diet Doc, Chad Nichols in his corner, The Egyptian Phenom was on point. He was showing off his physique on social media. He was training, he was flexing, and he was nailing it. He wasn’t playing with colors, he wasn’t standing in shadows, and he wasn’t covered in layers and layers of clothing. There’s so many little tricks the top guys can employ. Ramy wasn’t employing any of them, he was also not bragging. If you know Ramy, you know he’s incredibly down to earth, very soft-spoken, and especially very humble. Here’s a guy who industry writers and commentators have been calling the next big thing, yet he’s mellow and chill. That being said, an top tier athlete knows when they’re point and Ramy certainly was. Then 5 or six days out from Chicago, it’s headline news, “Big Ramy Tests Positive for Covid.” As if 2020 couldn’t possibly get any worse.

Even in the hopes Ramy is asymptomatic, the positive result will sideline him from competition. Since he can’t compete in Spain, there are no contests to compete in. His 3rd place at the Arnold won’t get him anywhere near enough points to qualify and I simply can’t imagine there being more contests put on the schedule. Also, with guys like Maxx Charles competing in multiple contests, trying for dear life to accumulate points, it would seem quite unfair for Ramy to get a special invite. Why should he cut to the front of the line when there’s guys competing in show after show for a chance to get on stage. On the flipside, this is the year of the pandemic and it would be quite fitting to let Ramy compete through the special invite, despite being unable to compete because of the virus, and hitting the stage 100% recovered in Las Vegas, NV, a week before Christmas in 2020. To be fully transparent, I’m somewhat torn on the issue.

The special invite should be used rarely. Some fans think it could and should be used every year. Last year, Cedric McMillan was able to get one because he’s in the military and lacked the ability to compete in as many shows. Cedric, who recently made a video shooting turtles with a sniper rifle, is a fucking asshole, but because he’s active duty military, he deserved the special invite. When Kevin Levrone wanted to make a comeback after over ten years off the stage, he was given one. Kai Greene also received a special invite, even though he never ended up using it. The point is, these are rare privileges that should be bestowed upon athletes that present special circumstances. Then again, how much more special of a circumstance is testing positive for Covid 19 – in 2020 of all years. Prior to this test, I was highly offended at any suggestion that Ramy should get to the Olympia this way because that would have amounted to rewarding him for not competing; however, contracting the virus changes everything. If it was my call, I’d lean more towards him getting the invite than not.