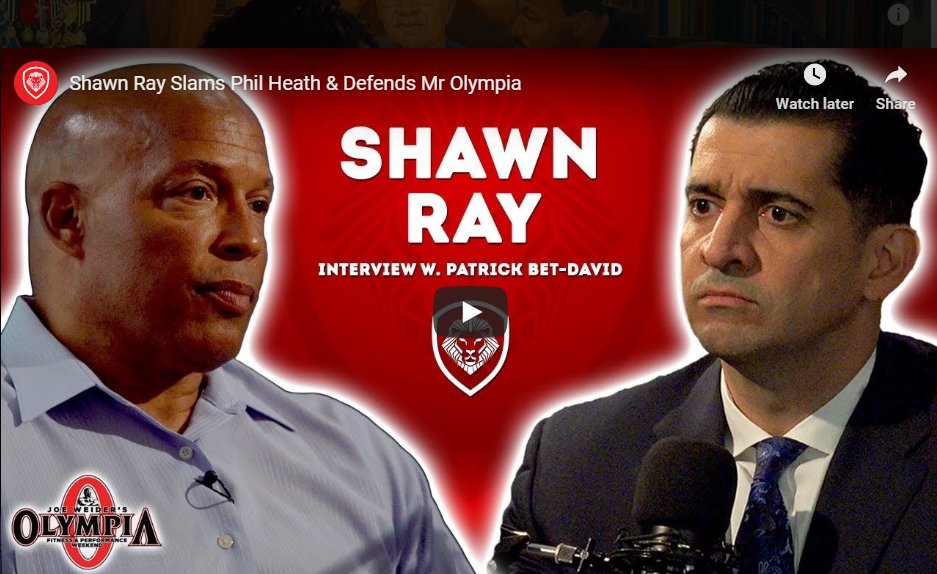 On the latest bodybuilding interview over on the Valuetainment YouTube channel, Patrick Bet-David sat down with Shawn Ray to discuss everything bodybuilding related. As usual, there were a few questions thrown at Shawn Ray that were meant to stir the pot a little bit, and Shawn did not back down from the questions or give the politically correct answer – which he never does. This caused quite the stir on social media and I’m not so sure the shade thrown at Shawn Ray was warranted.

I’m sure there are going to be people who automatically hate me for saying that, but (like Shawn), I’m the type of person who’s going to voice my opinion and you can agree or disagree and it’s not going to affect me one bit. So, with that being said, let’s dive into the interview with Shawn Ray.

A Tree Provides Shade, But Does Shawn Ray Care About It Coming from Critics?

Many people in the industry seem to have a negative opinion of Shawn Ray. Meanwhile, they’ve never spoken to the man, let alone saw him in person. I was able to meet Shawn a few times at the Arnold Classic, and the last time I was able to spend some time with him was when he was the emcee at the Arnold Amateur and I was one of the presenters handing out trophies to the winners. I was able to speak with him backstage and we even had a few laughs on stage as well. I, personally, have nothing bad to say about the man. I’ve even interviewed him many years ago for Bodybuilding.com.

Is Shawn Ray opinionated? Sure. But aren’t we all when you think about it? It probably just comes down to the fact that the people you hang out with also share the same opinion so there is no clash going on. I respect the man as he’s self-made. No one gave him anything in the industry. In fact, I feel as if the industry has tried to take things away from him due to him being so open to voice his opinion where he would like to see changes made from both the IFBB as well as the Olympia competition.

While many critics bash Shawn for the things that come out of his mouth, I feel there’s a lot of solid points that he has made. In the interview, he mentioned to Patrick that him voicing his opinion is merely to improve the sport of bodybuilding. And the points he has made (that I’ve heard) make perfect sense. Yet, every time he opened his mouth, people label him as being negative and that he was complaining.

Shawn even raised his hand to become the “athlete’s rep” and was voted in by his peers. After an unfortunate event where he was disrespected, he walked away from his role. Did that leave a bad taste in his mouth? Absolutely. But from the outside looking in, I’d feel the same way if I wanted to do what was best for the athletes and the sport and no one gave me any respect.

The Delivery of a Message Isn’t Always the Most Appropriate

While I do agree with many things Shawn has said over the years, I do believe his delivery at times can be off. Let’s jump right into the elephant in the room that everyone is talking about which also will lead to another interview on Valuetainment that will go live soon – and that’s Shawn’s response to Chad Nichols.

Patrick Bet-David asked Shawn if he ever worked with Chad Nichols – which Shawn was quick to attack. I would have taken things in a different direction, but that’s just me. Maybe I’d share my opinion with someone in private, but that’s not how Shawn Ray rolls. Shawn flat out said he doesn’t like the man, doesn’t respect the man, and faulted Chad for many deaths in the industry. Personally, I wouldn’t have made that opinion public, but hey, Shawn is who he is and I’m not sure we would expect anything less from the man.

Obviously, Chad Nichols works with some of the top athletes in the industry and for those who don’t follow him, he also has a young son who (in my opinion) is going to be one of the strongest kids in the world – he’s an absolute beast. Does Chad have the ability to create champions or is there something more to it? Who knows? I’m not getting in the middle of that pissing match. But what Shawn has said does raise some questions about what is going on behind the scenes that have so many athletes that Chad has worked with becoming sick. Coincidence? Maybe?

Many will argue that Shawn Ray is no good for the sport and that what he’s doing is hurting the sport. I don’t see it that way. I see Shawn looking out for the sport and wanting what’s best for the future of bodybuilding – after all, he’s still a bodybuilding fan. And being that he has been on the stage and is an IFBB Pro Bodybuilder, he’s looking through a different lens when compared to you and me. Most of us have never competed a day in our lives and are simply huge fans of bodybuilding. Shawn has been there, done that, and is looking at things from a lens that has seen what goes on and how things have been handled in the past.

Again, do I agree with everything he says? No. But I respect him for going out there and putting his neck on the line knowing some of the topics he talks about has the potential to ruffle some feathers. Heck, there are times where I’ve written articles based on my opinion of how I see things and I’m totally off and the people working for the IFBB and the powers that be call me up and explain the truth.

But overall, I think Shawn (no matter what he does) will always play the role of the “villain” in the sport of bodybuilding. And not because he wants to. At the age of 54, he’s still out there lifting, still out there in better shape than most 50-year-olds, doesn’t have any negative side effects from his time competing, and I don’t think there’s a person out there who can silence the man.

I have a lot of respect for guys who will say what needs to be said even though they know it isn’t the popular thing to do and will bring them a ton of haters. And I’m sure many will blast me for siding with Shawn Ray – and I’m ok with that. I can’t knock someone who dedicated much of his life to the sport and continues to do what’s best for the sport, whether that means putting on his own shows, being an emcee, or doing content for various fitness and bodybuilding outlets. In the end, I want what’s best for the sport and the athletes.