DEXTER JACKSON MAY NOT CALL THE OLYMPIA HIS FAREWELL SHOW 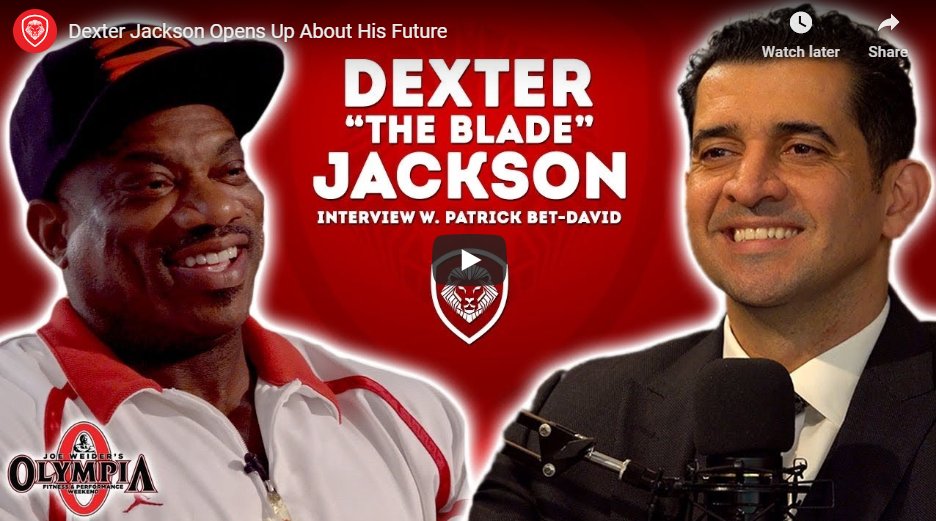 I’m a huge fan of Patrick Bet-David and his YouTube channel, Valuetainment as he puts out a ton of great content about business and entrepreneurship. That being said, over the last year, he’s been dabbling in the bodybuilding space due to his love of the sport. He, himself, wanted to be a bodybuilder when he was younger and is now interviewing various bodybuilders like Ronnie Coleman, Dorian Yates, Shawn Ray, Brandon Curry, and the most recent being Dexter Jackson.

Now, if you follow the sport of bodybuilding, you know Dexter Jackson is damn near 100. Ok, not that old, but when it comes to those still left in the game, Dexter is showing that age ain’t nothing but a number. At the age of 50, he placed 2nd at the 2020 Arnold Classic Columbus – beating out guys half his age. That’s insane!

But there was one little piece of a snippet I watched from Valuetainment that gave (me at least) a little bit of hope that the Olympia may not be the last show that Dexter does. How so? In the interview, Dexter said he didn’t want to diet for another eight weeks following the Olympia, but Patrick quickly corrected him with the actual dates of the shows.

Dexter Jackson May Not Be Done (Yet)

Mentally and physically, Dexter seems to be worn out from competing. He’s been doing it his whole life and at the age of 50, it’s not as easy to prep for shows like it was back when he was in his 20s. He announced earlier in 2020 that he was going to be retiring this year and that the Olympia would be his last show. But hold up, not so fast there, Dexter.

Patrick Bet-David asked Dexter Jackson about Athleticon and why he wouldn’t want to jump into the show. Dexter thought the show was in November but in reality, the show is in October. Only a few weeks after the Olympia in Las Vegas, Nevada. Dexter had a puzzled look on his face.

Realizing that he would only need to diet for an additional four weeks following the Olympia, Dexter Jackson told Patrick Bet-David that he may think about actually jumping into the show. He also mentioned about maybe that means he would do the Prague Pro as well. Hmmmm.

Show Me the Money

Dexter is a smart man and good with his money. Patrick questioned him on what smaller shows mean and Dexter was brutally honest and even threw Phil Heath under the bus and said competing is all about the money. Dexter said that the people at the Arnold wanted Phil to jump in the lineup and Phil said flat out that they would need to increase the prize money to what the Olympia paid out (at a minimum) for him to step on the stage in Columbus.

Money is the name of the game and while there are people out there who complete simply because they love the sport, for most of the professionals, this is a business and their livelihood. They need that prize money to live. With sponsorships disappearing, the only real way for many of these competitors to make money would be to show up at a competition and win (or at least place in the top five to at least get some small amount of money for their efforts).

It’s interesting when you think about it. Most professional athletes do not play sports into their 50s as Dexter Jackson has. Why is that? It’s simple, the body can only take so much. And when you think about the sport of bodybuilding, these guys are banging up their bodies on a daily basis and force-feeding themselves just to be able to hang with all of the mass monsters that hop up on the stage these days.

It’s not easy for normal everyday people to put on muscle mass and walk around everyday over 300 pounds, let alone trying to maintain that weight. We are talking about the need for thousands and thousands of calories per day. And while eating a ton of food may sound good to you, I’m willing to bet after a couple of days you’re going to give up.

Will We See Dexter on the Stage at Athleticon?

If you’ve followed my content that involved Dexter, such as the article I wrote titled, “Will There Ever Be Another Dexter Jackson in the Industry?” you would know that I mentioned I thought Dexter may push his retirement back and jump into Athleticon. I mean, why not?

While to my knowledge nothing has been confirmed, some sources are saying the payday for Athleticon could be higher than the Olympia – the gold standard and the Super Bowl of bodybuilding with the highest money being awarded to the top competitors. As mentioned above, money is money and if there’s a big purse out there to snatch up, Dexter Jackson would almost be nuts to NOT want to toss his hat in the ring when it comes to Athleticon.

So, I’m going to go on the record and say I absolutely believe that we will see Dexter Jackson on the stage at Athleticon. Not only because the money is there and he’s going to follow the money, but also it would be a great farewell to go out at the inaugural Athleticon with celebrities all around and from what we can only imagine, a huge amount of bodybuilding fans and spectators who want to see the show that The Rock will be putting on.

But overall, Dex, if you’re reading this (I’m definitely tagging you on social media), we would love to see you at Athleticon if you’re willing to hop back on your diet for a few weeks following the Olympia.