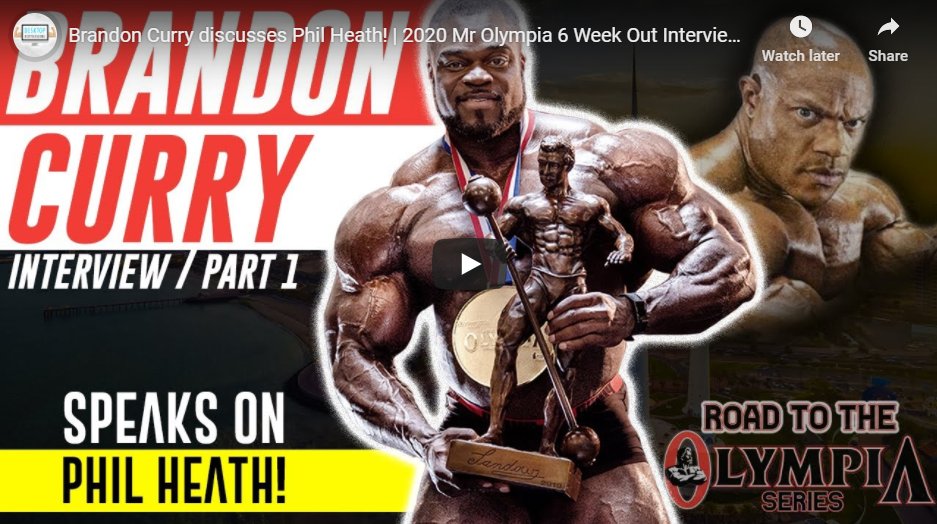 Here we go again!! Bodybuilding is becoming a sport where toxic attitudes are rewarded with attention and that has got to stop. Mr. Olympia Brandon Curry has been a lightning rod for positivity in the fitness industry; he’s worked hard to grow the sport in what’s easily been the most chaotic year in history. Despite contest postponements and cancellation, gym closures, and stay-at-home mandates, the champ has been a fantastic role model for his fellow pro’s and for millions of fans all around the world.

Up until the pandemic, few (if any) pro’s did IG Lives. Brandon started doing these on the daily, often bringing on guests, and doing other people’s Lives. Why? Because there was a very strong commitment to fomenting as much of a sense of normalcy and family as possible. When it comes to family, most Mr. Olympias were all about themselves. Some may or may not have included their significant others in the far in the distance of their training videos or consuming their meals, but it wasn’t until Curry that the family of a Mr. Olympia was introduced to the industry. This was done in a tactful way, where The Curry’s preserved their privacy, but also became a First Family of which the sport has never seen.

In what could only be a throwback to Lee Haney, Curry grew the sport through family values, every bit as much as through crazy workouts and crazy muscle gains. To see the Sandow shown to kids at a football game or to see the Champ at philanthropic/community events was huge. All in all, The Prodigy has walked the walk, he’s consistently been one of the most personable and down-to-earth ambassadors for bodybuilding. That being said, no one should confuse Curry’s kindness for weakness.

Phil Heath has been flappin his gums ever since he got TKO’ed by Shawn “Flexatron” Rhoden in 2018. He’s said he needed to experience defeat, other times he’s implied he really won. You can never take Heath seriously. He’s very much the John Kerry of bodybuilding. He’ll say one thing Monday, another thing Tuesday, and on Wednesday something totally different. Some might call that being diplomatic, but I call it, being a hypocrite. I don’t like the mood Phil is creating. Even his silly Dream Killer clothing line says it all. It’s negative, it’s not about making bodybuilding fun, it’s about payback and pride. In Phil’s mind, just his mere presence is giving his fellow competitors a reason to train harder, to get more serious – he’s actually said that!! That kind of egocentrism was gone when Phil left. You didn’t hear Rhoden talk like that. You certainly haven’t Curry talk like that. Phil is very insecure, very upset he’s not the center of attention, and he’s being negative through his own words and that of proxies. To date, however, we have yet to see The Gift posing in trunks. He’s always covered up and concerns are growing that he may not be ready in time. This may be one giant promo piece and we may never see him in the mix.

Most people have been very critical over the mere suggestion Phil might not actually compete, but why is that so out of left field? Kai Greeene was supposed to compete till a couple nights before the Olympia. Unlike Phil, Greene was ready many weeks before the big show. Kai looked, acted, and even said he’d do the show all the way till peak week. And then… he didn’t do it. I won’t believe Phil is competing until Phil takes the stage at prejudging.

I’m not going to talk about where i think Phil will place. I’ve already made myself clear on countless prior articles, but I will say that I hope media pundits look deeper into what he’s saying. The constant attacks aren’t going to have an impact on the placings or make him any better – so why say them? Phil has his own supplement company so he’s not being told to act this way. Maybe it’s his preogative that if he’s more controversial more people will pay him attention. Maybe it’s working, but how sad would that be, if that were the case? This should be all about fun, not negativity.

Look at how Jay Cutler came back in 2013. Of course, when asked, Jay would say that his goal was to prevail. Who does a contest, whether it’s a local NPC show or the Mr. Olympia, to do anything but win? But when Jay came back in 2013 he was doing it for the fans. He wanted to have fun and his whole road to the contest, showed a great deal of respect for reigning champion, Phil Heath. Jay and Phil were friends, but what if the competitors aren’t friends?

I don’t think Jay and Dexter were ever best buddies. They weren’t enemies, but they certainly weren’t close. Nonetheless, Jay always showed Dexter a basic level of respect as he prepared for the 2009 Olympia. Phil, on the other hand, has shown that he’s incapable of being civil. It’s like he wants to make Brandon snap. Could he see that as a victory, of sorts? I honestly don’t know and don’t care. I just wish Phil would act differently. For all his talk over the course of the last two years, all the makeovers, and all the talk of him growing as a person, he seems to be the exact same guy as he was when Rhoden knocked him off his high horse. To each their own, but what can we expect if Phil does win back the title? If he’s acting like this now, how will he act if wins? I think what we’re seeing now is just a preview.

It’s not helpful that so many champions of previous eras are all but lining up to predict Phil will win come December, either. Come on guys, get real! Show some backbone! These oldtimers are salty and when Phil wins, they’ll turn on him too. It’s like when Coleman put his foot in his mouth and said the top guys today wouldn’t make Top 5 in his day. That’s just plain absurd, but it gets hits, so the clickbait media is all over these geezers, hoping to market themselves off the many soundbites they can pull from the interviews they do with them.

Bodybuilders, today, realize they can get more followers by being toxic than positive. Muscle, symmetry, and balance take a backseat to big talkers and petty people whose mouths write big checks their phyisques just can’t cash. Phil’s mannerisms and outlooks play directly into this whirlwind of caddiness. Thankfully, the media gimmicks and the unabashed buttkissing Heath’s been enjoying, hasn’t rubbed off on the top guys. They know what’s up.

Roelly, Hadi, Bonac and Curry are class acts. Phil can talk. The old timers can talk. The media can talk. But come prejudging at the Zappo’s Theatre, only four guys will get into that first callout and Phil Heath won’t be among them. We don’t have to wait for the contest’s conclusion. We’ll know in this first few minutes where the chips are going to fall. If Heath isn’t in that group, I bet you he’s a no-show for the finals. I can see him totally walking out of the venue. He’s not a good sport, whether on the road to the O, the contest itself, or afterwards. We all witnessed his antics in 2018 and so far, 2020 is looking practically the same.

I can only imagine what insanity awaits for the press conference. I hope that Shawn Ray and Bob Cicherillo keep it classy. Both of these guys are consummate professionals and I have no doubt they will treat Brandon as Mr. Olympia. The champ gets a heightened level of respect and I know they will conduct their work accordingly. That being said, I have no doubt Phill will try to hijack the event, making it all about himself, taking digs at Curry, and trying to get the fans to turn nasty. I know Brandon won’t simply back down there, on stage, or anywhere, but he won’t stoop down to Phil’s level, either. I’m sure Brandon has studied how Phil was able to play Kai and he won’t allow that to happen to him.

For years I’ve heard folks say that Pumping Iron was largely a fiction and that the psych-outs we saw between Arnold and Lou – or – Ken Waller and MIke Katz – were all scripted. Ok, that may have been so, but that’s not to say that bodybuilders don’t try to psych each other out.

Phil played the victim for many press conferences with Kai; however, he was very much obsessed with getting in The Predator’s head. He got in his head at the press conferences and on stage, culminating with the showdown and near-fight in 2014. Kai never beat Phil because he was never able to successfully process and defeat the many psychological attacks Phil unleashed upon him. There’s simply no question that for many of those shows, Kai was emotionally defeated long before the winner was announced. I believe Phil was also able to do this to Ramy in 2017. The one guy Phil could never wear down mentally, was Rhoden. Shawn had him beat in 2016 and finished the job in 2018.

In the coming weeks, Curry should ignore Heath, but if he absolutely must respond, he should keep it very classy. Brandon wouldn’t be acting – that’s who he is. No matter how negative Phil gets, Brandon is Mr. Olympia. Bonac is the 2019 Olympia runner-up, Roelly was the 2018 People’s Champion and Dexter is the winningest pro in the history of bodybuilding. That’s going to be the Top 4 at prejudging. I’m sure Hadi, Ramy, and Phil won’t be far behind, but I wouldn’t bet on them upsetting the applecart. If they do – great! At the end of the day, anything can happen, but there’s simply no need to be negative or hit below the belt.

Brandon is coming to Vegas firing on all cylinders, with a far revamped physique from 2019 when he won his first Sandow. Not only will he repeat, he’ll continue growing the sport. Phil Heath could definitely take a note from the reigning champion.