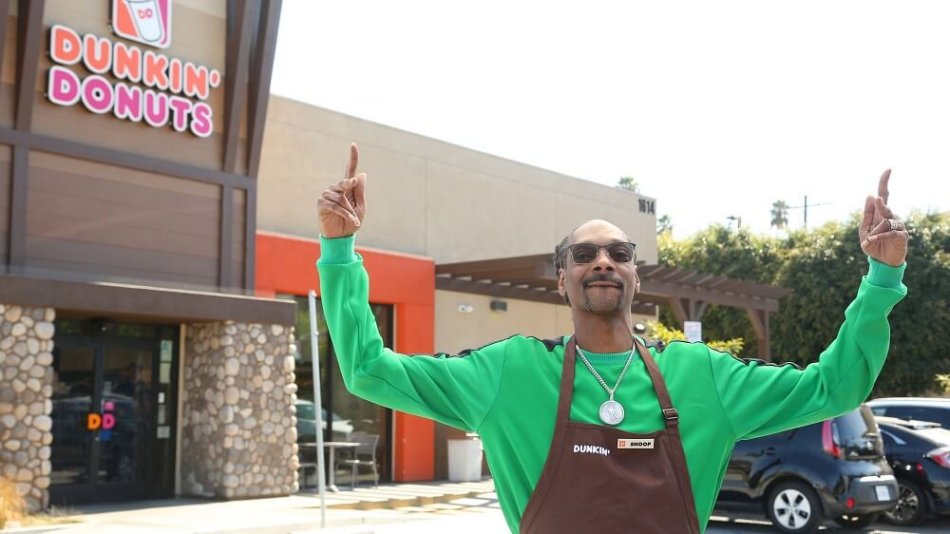 Dunkin’ Dunkin’ Dunkin’… what are we going to do with you? All this time I thought we had a great relationship, but we’re going to have to break up now. Ok, all joking aside, I love me some Dunkin’ coffee in the morning. They are way faster than Starbucks and the taste is a million times better than any overpriced Starbucks beverage out there. But honestly, WTF are you thinking with your latest sandwich?

In case you haven’t heard, Dunkin’ (Dunkin’ Donuts) has teamed up with Snoop Dogg, yes, the old-school rapper, to push a plant-based (kinda) breakfast sandwich that sits between a sliced glazed donut. Now, correct me if I’m wrong, but most plant-based consumers are plant-based for health reasons (along with the whole animal cruelty, etc. aspect).

The sandwich is called the Dunkin’ Beyond Sausage Sandwich which is made with their Beyond Meat plant-based sausage, an egg, cheese, and a glazed donut. So, in other words, you’re eating an estrogen patty between two slices of diabetes. This makes absolutely no sense at all. It has been said that these Beyond Meat-type alternatives aren’t exactly the best meat alternative for you. But then to toss the whole sandwich on a glazed donut is the icing on the cake (or donut, in this case).

Apparently, this is partially Snoop Dogg’s idea and has dubbed its new name to be the “Beyond D-O-Double G Sandwich.” Get it? D-O-Double G = DOGG (as in Snoop DOGG). If you’ve never listened to his music and lyrics it may still not make sense to you.

Personally, I’ll call it the “Beyond DUMB Sandwich.” I honestly can’t understand for the life of me why this would be thought of as a good idea. Now, Dunkin’ did mention that the sandwich is for a limited time, which I hope they mean for the lifespan of 24 hours.

Now, you may be wondering, “Why this combo?” It appears that Snoop Dogg has a thing for glazed donuts (insert pothead munchie comment here) and he includes plant-based protein in his diet.

A Vegan Sandwich Not for Vegans

Here’s something else that leaves me scratching my head. If you’re going as far as to create a Dunkin’ breakfast sandwich that includes plant-based sausage, why would you include the egg and cheese which doesn’t suit a vegan diet? You’re literally making a sandwich that would market that segment and then giving them the middle finger by throwing on egg and cheese which they won’t eat. Not to mention that the glazed donuts aren’t healthy either.

That’s like creating a plant-based protein powder but making it a blend that also includes whey protein. It just doesn’t make sense. It’s like talking out of both sides of your mouth. When I saw this, I honestly thought it was a joke. But it’s not a joke, this Dunkin’ sandwich is for real (at least for a limited time).

Blinged Out or GTFO?

But wait! There’s more! This collaboration between Snoop Dogg and Dunkin’ just got weirder. They are also offering exclusive apparel to push this collaboration. What can you expect to see? Well, Dunkin’ has said that they are going to be selling a green tracksuit with the words “Glazzed for Days” on the back of the jacket. I equate this to VPX launching Bang apparel that no one other than their paid influencers wear. Who in their right mind would wear this?

You can also expect to see joggers for sale that say “Glazzzy” running down the side of the leg. You know, to class things up a bit. Oh wait, it gets better. Who wouldn’t want to be a walking billboard for Beyond Meat too? On the apparel will be the Beyond logo. Also, to be released are shirts, sweatshirts, a bomber jacket, and if you have no hair and need to keep your head warm, you can grab a beanie.

Why Would Dunkin’ Do This?

Clearly, this is a marketing ploy for Dunkin’ and the fact that they teamed up with Snoop Dogg is just another layer of how they can get the word out about the brand using a celebrity. Is it the best choice for a celebrity? I can think of many others who would have been a better choice, but Snoop Dogg definitely has an audience and following.

I created a post on my social media as well and the sentiment has been very one-sided that this whole sandwich is a terrible idea. Regardless of our thoughts, I’m sure there’s a small percentage of the population who would be interested in this sandwich. And the bottom line is, they aren’t sourcing new ingredients JUST to make this Dunkin’ breakfast sandwich – they already have everything that makes up the sandwich so it’s nothing new or anything that they’d lose money on if it completely flopped (which it will).

This is a play to create some buzz surrounding the brand. As you know, Dunkin’ made the change to their new name so they weren’t thought of as just a place for just donuts when using their Dunkin’ Donuts branding. Obviously, that’s a smart play as they sell a lot more than just donuts and in fact, their beverages make up a good portion of their sales. Their sandwiches are also selling fairly well.

Personally, I’m more upset at the fact that they are wasting a perfectly good glazed donut on this Dunkin’ breakfast atrocity. We should all start a new movement using the hashtag #savethedonut.