JOSEPH BAENA – WILL – WRITE HIS OWN TICKET 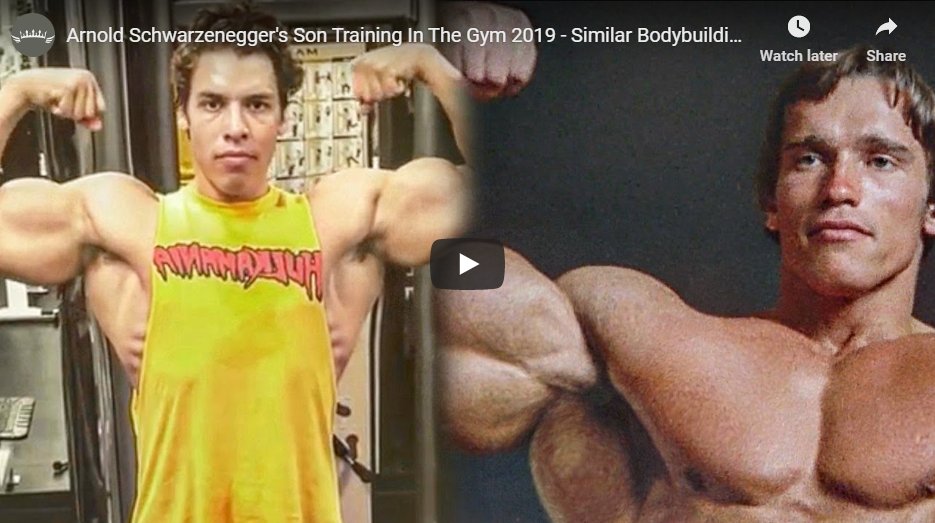 Joseph Baena is Arnold Schwarzenegger’s son and he has been all over social media with a recent photo of the young bodybuilder emerging from a cryotherapy session going viral. Ever since he was featured on a Terminator 2 remake, he’s been making waves in Hollywood. Although the remake was only a short, it created a lot of interest in the young actor, especially (now) having finished his university studies, and more than likely looking to make some key career decisions.

Many in the bodybuilding world have also been keenly following his career, as any indication that he would compete, would be extremely good news for the sport. Political commentators have also raved about Joseph, with the general consensus being, he could be a very viable future candidate for public office. Much like Arnold’s other children, Baena attended a great university, he’s interested in many of the disciplines that propelled his father to superstardom, and he knows how to create the kind of positive buzz which is an integral part of building a large, strong following in the digital age. If only this kid could be cloned, he could do a million different things, and probably excel at them all; however, given the fact that I’m sure he wants to do justice to whatever goal(s) he sets for himself, I’m assuming he’ll have to start with each individually and evolve over time. Arnold didn’t arrive in America wanting to run for governor, he started with bodybuilding, moved to acting, then to politics. As he reached the very top with each interest, he discovered a new one. I suspect that will be what Joseph’s trajectory looks like as well. With that being said, I believe he could do exceptionally well in bodybuilding, acting, and politics, and quite possibly even surpass his father. Here’s why.

I would say that bodybuilding is most apparent. Of all Arnold’s children, Joseph has built a physique that pretty much cancels out the 90’s and even the current bodybuilding look. What I mean by that is, you look at Arnold in his heyday (the mid 70’s) and you look at the physique Joseph has built and continues to perfect, and you see very strong similarities. The way he trains and more than likely how he eats and uses supplements is seemingly a lot more in line with the way guys in the Golden Era operated, than anyone today. That look, in conjunction with his striking resemblance to his father, will help him go very far in a sport that relies heavily on marketing and promotion.

Could you imagine the electricity Baena would draw if he competed in the NPC at the local level, regional level, or, especially, if he was on the national stage battling for an IFBB Pro League Pro Card? Look how excited people get when Arnold snaps a selfie with Cedric McMillan or when he took a follow-up photo after so many years with Sergio Oliva Jr. Could you imagine Arnold, the namesake of the Arnold Classic, taking a selfie from the venue floor with his son hitting one of his signature poses from the 70’s on stage, as an IFBB Pro League Pro, at the contest he created? He wouldn’t even have to win the contest, just be at there. And you don’t qualify for the Arnold, you’re invited. I’m pretty sure they could make that happen. Lol. I mean seriously, just the idea of just the photo itself is enough to give any real bodybuilding fan, goosebumps. Imagine the kind of promo and the level of fanfare leading up to the show, if Joseph were a competitor. He could even compete in the Arnold Amatuer; it’s just something that would be monumentally historic!! I can’t tell you how big that would be.

Also, bodybuilding is what started it all for Arnold and it may be what will start it all for Joseph. Legacies are big in every discipline and if you think legacies have it easier, well you couldn’t be more wrong. Just ask Hunter Labrada or Sergio Oliva Jr.; if anything they have to beat everyone on stage, but they’re also trying to do right by their legendary fathers. Legacies have more pressure on their shoulders, but that pressure, undeniably, builds very strong character. That’s another thing; these kids will always be kids in the eyes of the fans who cheered for their fathers, but they really do come into their own; they [eventually] earn their own respect, earn their own fan bases and go on to achieve big things. I don’t think Joseph wants to be an Arnold nostalgia act, either. I think he’s going to do right by his dad and his dad’s work, but he’s going to be just as self-made and self-driven, as he was, also.

In Hollywood, the name Schwarzenegger opens doors. If your last name is Schwarzenegger, you can pretty much write your own ticket. Joseph’s last name, however, is Banea and he will open his own doors, write his own ticket. A person with the last name of Schwarzenegger, will get automatic star treatment, but the people, the blue collar crowd, the super majority of folks who have had to pay their dues, they’ll have more respect for a kid no one ever knew about, who lived in a nice 4 bedroom house (but by no means a mansion), and who made his way, more than a kid born with a silver spoon in his mouth.

Joseph may, in fact, have an agent already, but we should see him on major motion films – like yesterday!! A short is great for art class and small film festivals, but let’s get serious. Then again, maybe his plan is to start with bodybuilding and progress. That’s just it, I don’t know what his plan is, but I’m excited to see where he decides to go. If one photo in a cryotherapy station can make as much noise as this week’s social media offering did, then what would happen if he landed a role on a big movie? I, personally, think his agent should develop a strong relationship with Netflix and have the young Baena reading for a variety of roles in a variety of genres for the media services provider. Skip all the other companies – focus on Netflix.

This kid should never appear in cheesy, low budget B movies that no one ever watches. There’s so many of those that I think producers use them as a loss on their taxes. We should also never see Joseph as an extra or playing a minor role. I think it’d be great if Arnold made some calls behind the scenes, even anonymously, and really set Joseph up in show business. It’s the least he could do.

I’ve always read that Baena has an interesting relationship with his siblings and I’m not looking to speak on that, because I have no knowledge on it. I can say, I have half-siblings and just the concept of a half-sibling is beyond offensive to me. I hate it. I get that we only have one parent in common, but I have a sister and I have a brother, and I love them both. When I think of them, I think of a brother and I think of a sister; the word ‘half’ never comes to mind. However, in Joseph’s case, that’s probably a cool theory to read about, but totally not his reality. He didn’t live life like his Schwarzenegger siblings did. He’s got the same dad as them – but not even the same last name as them. His mother was a domestic worker, not American royalty, and that, too, creates a disconnect that I would imagine becomes painfully obvious, quickly. What must make things even more complicated is the fact that the unknown son, looks identical to Arnold, has a strikingly similar physique to him, and will be just as well received by him over time. Lastly, if anyone doesn’t believe sibling rivalry is a thing, then I think you’re living in the twilight zone. Sibling rivalries are most definitely a thing for everyday people, so you can rest assured they’re a thing for the offspring of legends.

If Joseph ever enters politics, he’ll hit it big as well. Unlike his siblings who can claim the Shriver/Kennedy and Schwarzenegger names, Baena is a Guatemalan-American kid from Bakersfield. That’s as working class and blue collar as it gets. If he goes Democrat, with emphasis on social welfare and fiscally conservative leanings on taxation, he’ll be governor of California by the age of 35 (provided he’s eligible at that young age). Arnold was a watered down Republican with liberal leanings, but we all know how culturally diverse those California GOP events must be. I’m sure they’re ok for a German married to a Kennedy, but.. That being said, if Baena caters to them insofar as taxation, he’ll get enough of their support to seal the deal – he probably wouldn’t even have to campaign. And unlike Arnold who was not born in America, Joseph was, and Joseph could POTENTIALLY, one day, run for president.

Let me clarify. Listen folks, any citizen can run, but when I say RUN, I mean RUN with a good chance of WINNING. If Arnold could have run, believe you me, he would have won. If you’re marveled at how Trump won without being a party hardliner, you would have been FAR MORE thoroughly impressed with a Schwarzenegger presidency. Who knows, though, we might live to see one with Joseph.