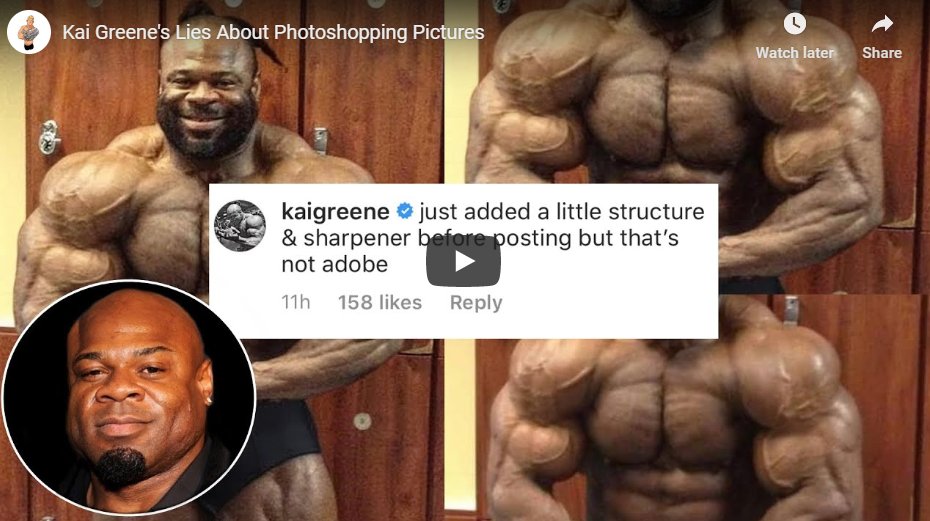 I’m so sick of hearing about Kai Greene and Kai Greene’s name come up in our industry anymore. I respect the man for what he’s accomplished both on and off the stage, but enough is enough. Either get back on the Olympia stage or shut up.

The last time you stepped foot on the Olympia stage was 2014. Then the following year you came up with some boo-hoo story about getting screwed or unappreciated or whatever you expected us to assume by reading between the lines regarding why you wouldn’t be competing in the 2015 Mr. Olympia. Then you hinted at a comeback in 2016 and bailed – and the cycle has repeated itself every year since.

Enough is enough. Again, I respect you but toying with the fans is messed up. If you give them a hint you may come back, they buy great seats at the venue, book their flights and hotel, and get all excited to see you back on stage. And then, where are you? Not even a sign of Kai Greene in the building or expo. So, it’s getting increasingly hard to respect someone who shows ZERO respect to the fans who pay good money to secure tickets to these shows.

I’m Not the Only Person Fed Up

Look, I’m not here to drag others into my rant, but it needs to be brought up that I’m not alone in my stance and this isn’t just one person within the industry who is voicing their opinion.

Dan Solomon went on RxMuscle and even shocked Dave Palumbo when he said he isn’t thrilled with Kai Greene and his behavior over the years. The teasing and hinting at a comeback and then disappointing the fans. At the end of the day, Dan Solomon and his team are responsible for putting on a fantastic Olympia production and experience. Add in the hope that Kai will return like he keeps hinting, only to sit out another year is quite disrespectful to not only the fans but also the promoters of the Olympia.

Then we have seen a little back and forth between Nick’s Strength and Power and Kai Greene on social media where Nick essentially said Kai Greene is a troll and Kai responding back saying if Nick keeps it up “Santa Kai won’t come in December.” Kai then goes on to comment that “There is a show in December, I hope they still believe if they want Santa to bring THE GIFT.” This all stemmed from Kai posting a video of him posing and acting as if it were recent. There’s a noticeable gap in Kai’s teeth in the video which Kai has since had fixed. Yet Kai Greene continued to say it was a recent posing clip.

Go ahead and read between the lines there and you can assume that either Kai Greene is hinting that Phil will be coming back to the Olympia stage or that Kai, himself, will be returning to the stage and bringing Phil with him. Either way, I’m not going to put much thought or emphasis into it because all Kai does anymore is talk in code like we’re supposed to be Dick Tracy and follow the clues. Well, the clues must be coming from a bad source it seems.

Yep, I went there. And I can say that I 100% believe Kai Greene doesn’t have what it takes to EVER hold a Sandow unless the winner allows him to hold it while he’s signing autographs. I mean, Kai could barely beat Cedric McMillan at an Arnold Classic, and Cedric hasn’t been anywhere close to being a contender at the Olympia the past several years. In fact, he’s been having a hard time making it in the top 10 – and it’s hard saying that considering I’m a huge fan of Cedric.

Some people would say there is a rivalry between Phil Heath and Kai Greene. I’m sure if you ask Phil, he’ll tell you that Kai was never a rival because he never beat him. The Red Sox and Yankees are rivals. It’s constantly back and forth. Kai Greene could do no better than second-place when Phil showed up to the Olympia and I think it got under Kai’s skin.

Why didn’t Kai come back last year when Phil was out? I think it’s because Kai doesn’t have the passion to compete anymore. I think mentally he’s been so beaten up and tormented by Phil that it’s taken everything out of him. Sure, you may see Kai Greene in the gym still absolutely killing the weights – but that’s his lifestyle and not a means of revenue. Bodybuilding for the longest time was Kai’s life and what financially helped him make ends meet. Then when his name started getting out there and he allowed his creativity to flow, he bailed and created a life outside of the sport. And good for him, the dude’s incredibly talented.

It’s hard for me to knock Kai as a person. He’s incredibly creative and the fact that he’s doing so well outside of the sport shows just how talented he really is. But that creativity, in my opinion, has completely changed Kai’s perspective on the sport of bodybuilding and his future of ever competing again. He doesn’t need the stage to bring in money. He doesn’t need the stage to create a name for himself. And he certainly doesn’t need to go through the torment of dieting for a show if there’s no reason for him to jump on a bodybuilding stage anymore.

So, in closing, I’m going to say it yet again for all the people in the back… PUT UP OR SHUT UP, KAI. Either get on stage or stop talking about bodybuilding. Your fans are starting to get annoyed with your cryptic messages and posts. If you think you still have it, get on stage. Otherwise, stop making noise and trying to stay relevant in the industry.