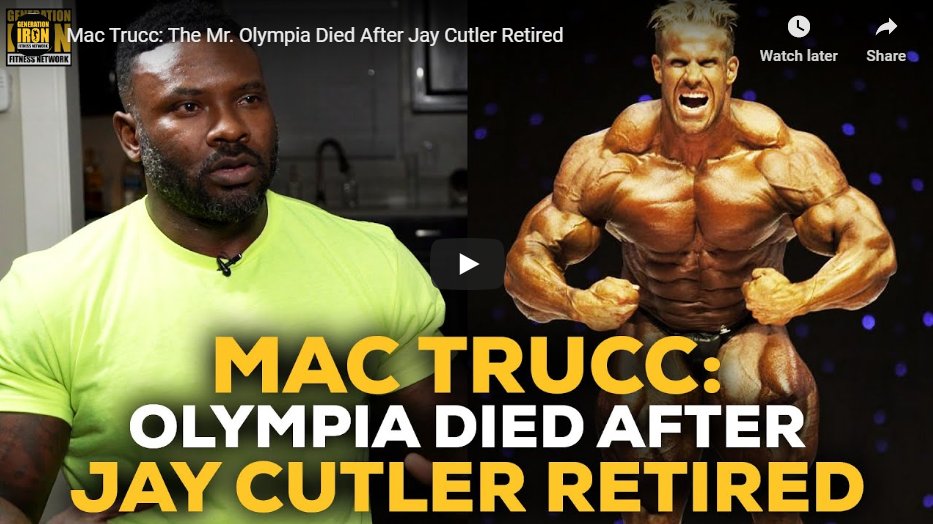 Whenever I need a good laugh, I head over to the Generation Iron YouTube channel and play one of their videos. Now, I’m going to start by saying I don’t know Mac Trucc (Wes Boxley). I’ve never met him, never spoken to him, and I have nothing against him. It’s impossible to talk about someone you don’t even know. In fact, I only know of him because of the beef that went down between him and Rich Piana. While I’m not going to talk about Mac Trucc specifically in this article, I am going to touch on some of his comments during a Generation Iron interview where he said the Olympia died after Jay Cutler retired as well as his thoughts on Olympians.

Who Da Fook Is This Guy? (In a Conor McGregor voice)

I’m sorry, but I can’t stop saying, “WHAT!?” (like Lil Jon) after listening to the words that came out of Mac Trucc’s mouth in a recent interview with Vlad of Generation Iron. How can Mac Trucc say that the Olympia died after Jay retired? To me, it just doesn’t make sense. I mean, I was a HUGE fan of Jay Cutler, but I didn’t think the Olympia died when he was no longer in the show. I’ll give him the point that I felt like there was a shift after Jay walked away from the stage and hung up his posing trunks, but to say the Olympia died is simply untrue.

In the interview with Mac Trucc, he went on to say that after Jay left, the only two people left were Dexter Jackson and Victor Martinez – and that they weren’t able to carry the sport by themselves. Maybe I’m missing something, but Jay was ousted by Phil Heath. Did he completely forget about Phil? Now, has the Phil era been the same as the Ronnie and Jay era? Heck no, but during Phil’s reign, the Olympia wasn’t dead. For a while there you had Kai in the mix and that kept things interesting. How can we forget the moment where everyone held their breath thinking Phil and Kai were going to throw punches on the Olympia stage and needed to be separated?

But just to paint the picture of what I’m saying, Phil defeated Jay in 2011. Here are some of the names from the top 10 at that Olympia: Phil Heath, Kai Greene, Victor Martinez, Dennis Wolf, Dexter Jackson, Toney Freeman, Brandon Curry (the 2019 Mr. Olympia winner), and sliding in at 11th place was none other than the 2018 Mr. Olympia winner, Shawn Rhoden.

To further prove my point, let’s look at the 2012 Mr. Olympia lineup: Phil Heath, Kai Greene, Shawn Rhoden, Dexter Jackson, Branch Warren, Dennis Wolf, Toney Freeman, and Roelly Winklaar. Are those not some of the names we all recognize as being top bodybuilders?

Where would you even get Victor and Dexter from in such a conversation? Victor has never really come close to ever winning the Olympia. Dexter won it once and after that was never really in the mix for the Sandow ever again. Notice the first two names I mentioned in the 2011 and 2012 Olympia? Phil Heath and Kai Greene. Heck, Kai hasn’t competed in years and people are still talking about him as each Olympia gets closer. So, putting the Olympia on the back of Victor and Dexter doesn’t even make sense to me.

Is There Beef Between Mac Trucc and Phil Heath?

I’m not here to speculate or start drama but in the Generation Iron interview, Mac Trucc didn’t even mention Phil’s name when he spoke about the Olympia. I mean, the man has won the Olympia title seven times in a row. Shouldn’t there be at least a little bit of respect for Phil? Where’s Rodney Dangerfield?

After all, you’re putting Jay up on a pedestal, yet Jay only won four Sandow’s and Phil won seven. It just doesn’t seem right saying “only won four Sandow’s” but you get the point – Phil had a longer run with winning the Olympia but then again also wasn’t going toe-to-toe with Ronnie Coleman either.

The one thing I do find odd during the interview is when Mac Trucc said now that he has the IFBB (meaning he has his pro card), all he needs is to have “Olympian” associated with his name. Now, I don’t take Mac Trucc as someone who half-asses anything. When he does something, he does it to the best of his abilities to win. So, why say you don’t care about who wins the Olympia just as long as you make it to the Olympia and have “Olympian” connected to your name and status like that actually means something?

Last I checked, Michael Kefalianos was an “Olympian”, and no one even remembers him. Know how many pro wins Kefalianos had in the IFBB? One. The 2012 Mr. Europe Pro (and I even had to look it up as I didn’t think he had any wins). So, I hate to say it, but being an “Olympian” really doesn’t mean much in the grand scheme of things when trying to build a name.

From all of the sources I’ve spoken to, including Dan Solomon himself, the 2019 Mr. Olympia was HUGE. It was a completely sold-out arena and the show was electric. If what Mac Trucc said were true, you would think eight years after Jay Cutler retired that the show would be much smaller, no?

Look, this is all in good humor, I can only assume that Mac Trucc was put on the spot in the interview when asked about the Olympia and simply came up with something quickly to answer the question. I sure hope he doesn’t deep down think that the Olympia has died because it’s nowhere close to dying and now with Jake Wood owning the rights to the Olympia and all the fitness media publications once owned by AMI, I see only great things in the coming years.

To close this out, I wish Mac Trucc the best in the IFBB, he looked good when he won his pro card, and hope he makes it to the Olympia by securing a win this year so he can have “Olympian” put next to his name. Meanwhile, all of the other competitors will be prepping to hopefully have their name called last and earn the right to have their hand raised as the 2020 Mr. Olympia winner and take home a Sandow Trophy for their mantel.