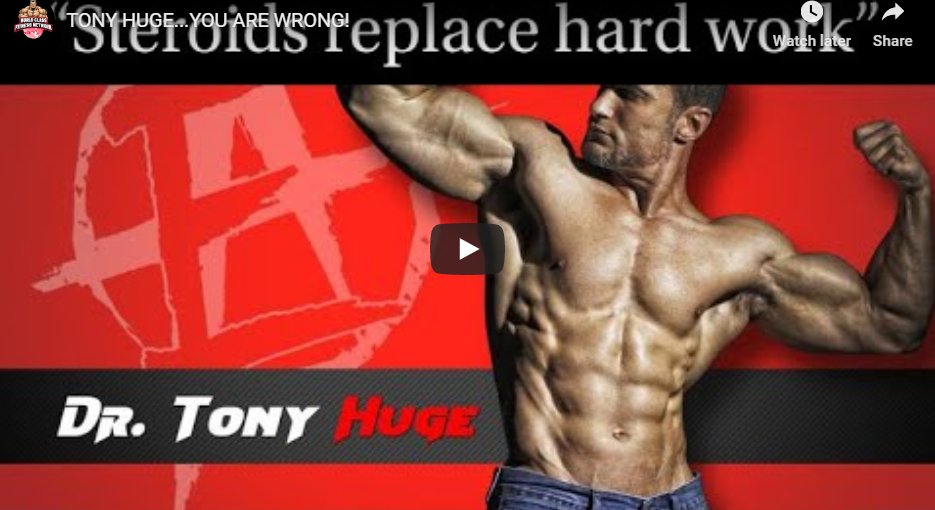 IFBB Pro, Mr. USA Nick Trigili went on record yesterday, taking Tony Huge to task on a new video. I personally, won’t call him Dr. only because he’s not an MD and as a JD, I’d never expect anyone to call me doctor. That being said, it’s a cute marketing tactic, if anything else. And that’s what most of Huge’s schtick might be, particularly with his latest round of promo for the upcoming Generation Iron follow-up, Enhanced 2, which showcases Tony’s take on experimental supplementation while employing various publicity angles, from catchphrases, humor, and the cameo appearances of those larger than life – both physically and/or in terms of social media fanfare. Rest assured, this may seem like a DIY, everyday type lifestyle, but it’s also one I’m sure is rich in production value.

I get it. We’re talking about a film and films need to make money. No one is going to rent, much less buy a documentary, in 2020, unless it’s really, truly something to write home about. That being said, the content and context in which it’s published to the masses, will also have a reaction. Interestingly, negative reactions will only increase interest in the subject matter, by increasing word of mouth and even rentals/sales. If there’s anything not in short supply in our industry, it’s haters. Find me one successful person, and I’ll find you an army of haters following him/her around. Today’s article isn’t about that though. Nick Trigili isn’t being a hater. He’s a former Mr. USA, IFBB Pro, and contest prep coach. He’s taken supplements since a young age and respects Tony; he considers him credible and he’d like to meet him, but Trigili takes exception with Huge’s overemphasis on drugs. Nick goes on record as saying [about Enhanced 2], “as soon as this documentary comes out, we are fucked.”

Almost from the start of the video, Nick asked his audience, what the real motive was? He spoke about how a lot of people don’t work hard anymore, how they don’t eat correctly, don’t train correctly, and believe drugs to be everything. He comes right out and says it – Tony is validating this way of thinking. Trigili pleads with Huge, “you have so much power, you influence so many people,” he credits him on his clinical studies, but he also points out that mainstream lifters and aspiring bodybuilders will double their dosages (even doing more than what their coaches tell them), to follow this drug-centered approach.

Nick doesn’t undercut the huge value of supplements, though, recognizing the great scientific innovations made. In fact, he says that the drugs give a blueprint, which proper training and nutrition will complete. I think his main objection is that he feels Huge is totally downplaying the significance of diet and hard work in the gym. This is why Nick said, “I was in the trenches,” when he talked about everything he had to do to win the USA’s. That one phrase also speaks to a level of credibility few people in the industry have. Nick went pro and Nick competed as a pro. How many social media stars can say that? Even established, veteran personalities like Dave Palumbo can’t say that. But this isn’t an attack on gear, just its place in the grand scheme of things.

Trigili believes the drugs create a blueprint, he recognizes their very key role, and he understands Tony’s point, he just doesn’t think the average person will. That’s no knock on anyone’s intelligence or IQ, but most people just don’t know the intricacies of gear, let alone many of the obscure substances that Tony and his camp like to experiment with. I think Nick has a solid point.

I’ll admit, this is truly a very interesting set of circumstances, because Nick isn’t some natural bodybuilding zealot. He’s certainly not anti PED’s, but he’s concerned for the youth and he’s also concerned for folks who discover the sport later in life, but who also may lack the proper understanding, going too hard, too fast. There’s always a consequence to every action and unfortunately, for as clever and catchy as marketing may be, some people may not be able to read between the lines, before it’s too late. I’m not talking about the law or even liability, I’m talking ethics. It seems Nick has a real ethical bone to pick with Huge.

That being said, I’ve seen the Enhanced 2 trailer, I’ve also watched a lot of Tony’s videos, and I have my own personal opinion about the content. Some people want to be a legendary bodybuilder like Ronnie Coleman, others a great writer like Peter McGough, and some want to be the Dan Duchaine (mad scientist to some, genius to others) of their era. One guess who Tony is probably wanting to be.

It’s also a social media kind of world, with others before Tony who were even more in your face. Imagine what Bostin Loyd could have done had he had the vision of Huge, with the marketing machine behind him, to boot. Success is all about having the right people, at the right time, and the rest is history. But even stars should be responsible; even stars should care. Does Tony care? I don’t know. I honestly don’t.

On the flipside, NIck was also with Generation Iron once upon a time. What happened there? I don’t know. He likes Tony, respects Tony, and has never (to my knowledge) publicly objected to his content before. He also didn’t trash on GI, so I really don’t think he’s salty with either, I just think he may genuinely be concerned for what he feels may be inaccuracies in this documentary.