NO ONE’S SHARPER (OR MORE IGNORED) THAN THE BLADE 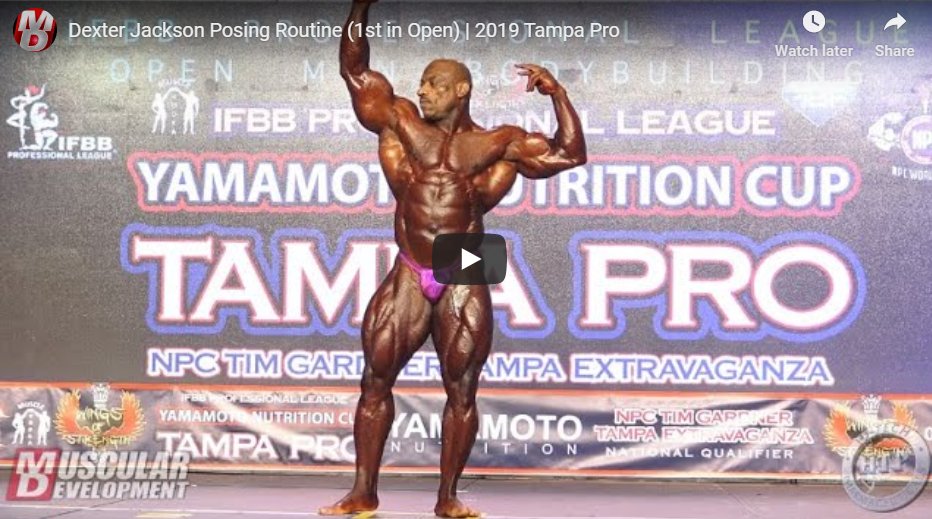 9x Arnold Classic champion Dexter Jackson is poised to earn his 10th Arnold title in just under four weeks time in Columbus, OH. The 2008 Mr. Olympia winner trains methodically, giving 110% with each workout from the Mecca of Bodybuilding, Gold’s Gym, Venice Beach. Together with the legendary Charles Glass, Jackson is hunkered down, doing what he does best – training and getting ready to defy the odds.

He’s been defying the odds his entire career. At 50 years young, there’s simply no end in sight for him. Last year, he even qualified for the Mr. Olympia, by winning the Tampa Pro. If you’re wondering why a former Mr. Olympia bothered to qualify when he didn’t have to, then you mustn’t be familiar with how Dexter operates. He’s not a take-shortcuts kind of guy – he never has been.

With everyone looking at William Bonac, Ramy, and even Sergio and Patrick Moore, few media pundits are giving Dex the time of day. What else is new? Interestingly, he’s beaten every guy I mentioned and when everyone seems to be in agreement that condition is what will win this year’s Arnold, they all fail to give a guy who’s earned the nickname “The Blade,” any love. When Dexter is on point, there’s absolutely no one sharper!! In fact, when he won the Olympia back in ‘08, he sacrificed a bit on that edge by coming in bigger. That’s what was needed then and Dex was able to adapt for the times. There’s simply no question in my mind that he won’t bring great lines, insane crispness, and pose flawlessly in just 3.5 wks.

I’d give anything for Nick’s Strength And Power to start covering Dexter. Nick has the largest bodybuilding Youtube channel with over 800,000 subscribers, yet he hasn’t put a video out on Dexter in over a year. Two years ago he called Dexter “the bodybuilder who won everything,” saying he’d go down in history as one of the best. The love ended when Nick made his video comparing Dexter to Flex Lewis. Was that the last time Nick covered Dexter? I don’t know, but I haven’t seen much since. Nick, get over it, and cover The Blade. If you can stop talking about Phil coming back for a week, you could do a killer piece on The Blade. I get you might be butthurt Dexter implied you were a hater, but wasn’t Phil looking to sue you back in 2018?

I’d love to see Ron Harris interview Dexter for the Ronline Report. It would be so cool if Sugar Shawn Ray made a video about The Blade, like that awesome one he did for the Arnold on William “The Conqueror” Bonac. In fact, how cool would it be for Shawn to interview Dexter for Digital Muscle?

Generation Iron could reach out to the Jacksonville native and ask him for some time, as well. Maybe King Kamali would like to do the interview? How entertaining would that be? C’mon guys, these ideas are GOLD, run with them!! I don’t even need credit. You can say you thought up the idea.

RxMuscle momentarily surprised me with a video titled “Can Dexter Win #10,” but once I clicked on it, I had to wipe the egg off my face. The video was a 3 minute episode of Muscle in the Morning, with the story on Dex buried in the episode, and lasting a whopping 30 seconds. Total garbage. That being said, if RxMuscle wanted to really get a good interview with Dexter, may have Chris Aceto or Sid do it. I think the fans would love it.

In all honesty, it’s like there’s been a total media blackout. I can’t even make this shit up.

How’s it possible that a guy who’s won 9 Arnold titles, an Olympia, and has won more IFBB Pro League Pro Shows than any competitor in the history of the sport, is basically being ignored by the industry media?

One channel that’s booming right now is Jay Cutler TV. How cool would it be for the legendary Dave Bourlet to do an interview with Dexter Jackson at the Mecca? I don’t know that that can happen, but if it could, it’d be a must-watch.

The main issue that some media outlets have with Dexter is that he doesn’t talk trash. At a time when countless outlets and websites are looking for soundbites, using clickbait marketing, and some even engaging in the publishing of fake news, the prospect of having a celebrated champion, doing the business of bodybuilding, and working towards big goals, maybe doesn’t seem all that appealing. That’s a pretty sad state of affairs if you think about it. Then again, not just anybody could interview someone of the stature of Dexter Jackson. Although Dexter is low key, humble, and super down to Earth, when you speak to him, you’re speaking to a living legend. Not one guy competing at the 2020 Arnold – not one – is a living legend. They’re amazing bodybuilders, great champions, and they all have amazing futures, but not a single one of them is a living legend.

There are some guys who I think would do a fantastic job interviewing The Blade. Some of the names that come to mind would be Giles & AJ from MD Global Muscle. Although they’re very new on the scene, they’ve done some amazing interviews and have contributed greatly to the sport with their recent Olympia Allstar Tour, bringing Mr. Olympia Brandon Curry and 212 Olympia Showdown champion Kamal El Gargni to several countries in Europe. I am SO PROUD of them both and will be writing an article very soon. Another big name that comes to mind, would be the legendary Peter McGough. One other, very, very notable name that comes to mind, would be Dan Solomon. Giles/AJ, Peter, or Dan could do a fantastic job. I would literally die if they reached out to Dexter and made an interview happen. That would be the coolest thing since sliced bread. I don’t know if Lonnie Teper does interviews these days, but he’d definitely do an outstanding job, as well!

Another outlet that is booming right now, is VALUETAINMENT. I think Patrick Bet-David would do a great job, interviewing a living legend who’s been IGNORED and UNDERESTIMATED, by his sport’s media, for his ENTIRE career. I’d bet a lion’s share of Valuetainment’s 1.9 million subscribers would be glued to their phones and laptops watching the interview.

I sincerely hope that my colleagues in the fitness industry media take the time to reach out to Dexter. I also hope that they do not disregard my plea, continue ignoring Dexter, and then rush him for interviews at the Arnold Meet & Greet. That would be super lame, it would be a disservice to Dexter, and it’d greatly shortchange their audiences.