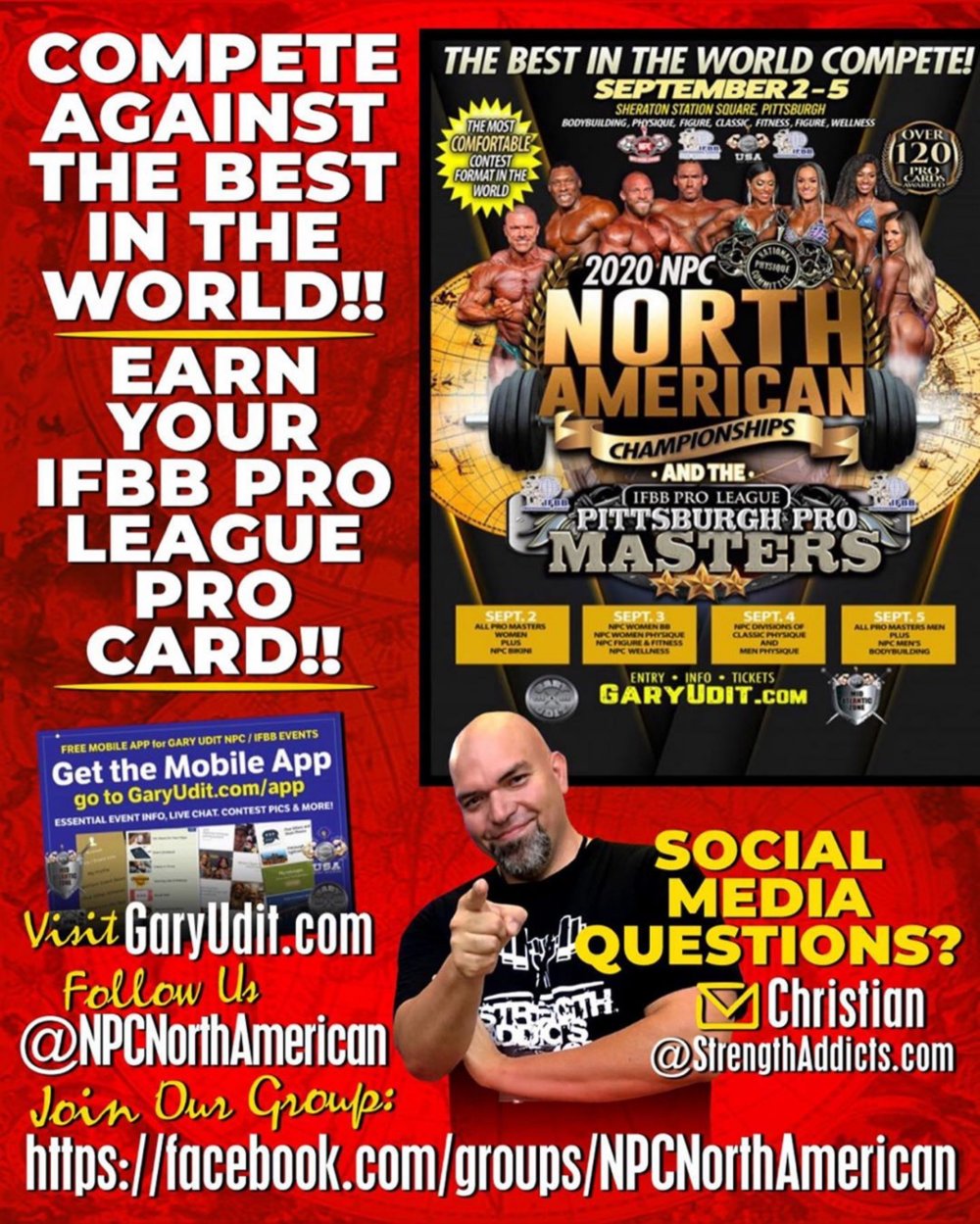 The NPC North American Championships has always been my favorite NPC pro qualifier. Out of the NPC USA Championships, the NPC Nationals, the NPC Universe, the NPC Masters Nationals and the new NPC Masters USA’s, the North Americans are truly an international event. At the North Am’s you have the best of the United States, Canada, and Mexico all descending upon Pittsburgh, vying for coveted IFBB Pro League pro cards.

While Venice Beach (aka “Muscle Beach”) may have been the springboard for Arnold and so many of the legends of the golden era of bodybuilding, including the iconic Gold’s Gym (the original & the one we know today), it pales in comparison to Pittsburgh, today.

Pittsburgh is the heart of the sport of bodybuilding. It’s home to the NPC, to President Jim Manion, and to Vice President Tyler Manion. Jim is the present and Tyler is the future. The fact the best competitors from three countries all hit the stage, battling before the best judges and the leadership of the IFBB Pro League says it all. Moreover, you couldn’t ask for a better promoter than Gary Udit. In addition to being the chair of “The MAZ” (the NPC Mid Atlantic Zone), Gary is also a Mr. Olympia judge and has been a driving force, growing the sport for decades. Gary is all about customer service and that’s one of the bedrock principles that have made the NPC the best amateur federation to compete with in the United States. Further, as we often say, the NPC is only road (in America) to the IFBB Pro League pro card – and – the IFBB Pro League is the only road to the Olympia. The Olympia is the only title in the world whose winners can lay uncontested claim to being the very best in the their respective divisions. When you take a step back and take all this in, it’s pretty overwhelming, and that’s why this event is so important.

I’m very happy that I’ve been able to head up the social media, through the highly interactive Instagram page and Facebook group. There’s so much going and so many people have pinned their hopes on this contest happening, that in just a few days, a whole wave of IFBB Pro’s will be crowned and this group will be extremely competitive. No other group has had to prep amidst a raging pandemic, government shutdowns, and stay-at-home orders. These folks are perhaps the most driven and when things go back to normal, they’ll be utterly, unstoppable!!

Many contests have postponed, postponed again, and many have had to make the tough calls of canceling. Other contests have moved locations, whether Los Angeles to Vegas or New York to Tampa – promoters are to the point they’ll move heaven and earth, if it means being able to have their contests. Most have resigned to the fact they won’t make any money, with a great many risking losing their shirts, but they’re poised to doing whatever it takes for the show to go on because of the competitors. If there’s ever been an instance where competitors can see how much they’re cared about, 2020 would be the ultimate example of it.

Competitors make the sport. Without the competitors, there would be no contests, there would be no expos. Without the competitors there would be no sport. This is why customer service is so important. Whether a contest happens under a tent, a parking lot, or even online, everyone is working towards providing the hardest working men and women in the world with a stage to compete on. And with that, the bar continues to be raised. The NPC is the best because of the depth in lineups, the sponsors and vendors involved, and the high-quality production value. This is truly where Gary and his team shine!! No one does it better!! A pro card’s a pro card, but where you earn it, really makes a difference. I can think of no better place than Pittsburgh and while I won’t be at this year’s event (I started a new job), I’ll be there in spirit and have done a great deal, virtually. These competitors have given their all and I’m happy to have made a whole army of new friends.

And for all the talk of the NPC North American Championships, I’d be remiss if I didn’t talk about the equally impressive 2020 IFBB Pro League Pittsburgh Pro Masters!! Masters Pro’s, today, are on the cutting edge, proving that age is simply just a number. When you look at the size of some of these folks, it’s really jaw-dropping. And what’s even more impressive about the big competitors, is just how dialed in and ripped they come. You’ve got the size AND the cuts, coupled with a real attention to posing. Most of these competitors grew up reading the magazines, buying the DVD’s, and being wowed by some of the most gifted showmen and show women who ever graced the stage. To say that their love of bodybuilding rubbed off on them, would be the understatement of the century. Masters pros incorporate many of the eras, as well as putting their own spin, for truly memorable posing routines. They really, truly bring the house down. After all, as the old saying goes, imitation is the greatest form of flattery. They truly pay homage and in so doing, really deliver great entertainment for the fans. I’m beyond excited to see what the pros bring to the stage in Pittsburgh.

For months, there was so much doubt, but I knew this contest would happen. Despite having to postpone it – I was certain the day would come. Although I’ve already spoken to this point, I feel it necessary to reiterate; promoters have really faced some of the biggest challenges of their entire careers, in 2020. We, as a sport, have never been faced with face masks, social distancing, and gym closures. This isn’t a Right or Left type reality, it’s not a state vs federal issue, it’s utter insanity across the boards. There’s no real rhyme or reason and worst of all – there’s no end in sight. And there’s nothing wrong with folks who have called 2020 a day, but there’s a group of individuals that simply wouldn’t give up – there’s no quit in them. To echo what many competitors have told me in the interviews I’ve conducted with them – the fact the NPC North Americans are happening, is a victory in and of itself!! They are so right!! I couldn’t agree more!!

In closing, I want to stress something Gary has referenced on many of his statements and that is that the CDC guidelines won’t just be met, but they’ll be surpassed. These two great contests will be a model of adherence and responsible event management for not just all other bodybuilding shows, but for all sporting events. We are living in a whole new world, but it’s all about adapting and evolving. Bodybuilding can and will carry on, but it will do so in full accordance with all government mandates, going above and beyond, to ensure the general well-being of all parties involved and of the greater community. Public safety is a chief concern. We’re all beyond excited for history to be made!!

Whether you’re attending the contest or will be glued to your phones watching clips throughout social media, I can assure you that the 2020 NPC North American Championships and IFBB Pro League Pittsburgh Pro Masters will be world class productions and massive successes!! If you know someone competing in either contest, please show them your support. Whether you say something nice in person or send them a text, make sure they know you’re rooting for them. One great place to show your support is social media!! Send the competitors you know a ¬¬DM, post a comment, or double-tap on their posts, it’ll go a long way.