THE DEATH OF GYMS? OVER 50% OF GYM MEMBERS WON’T RETURN 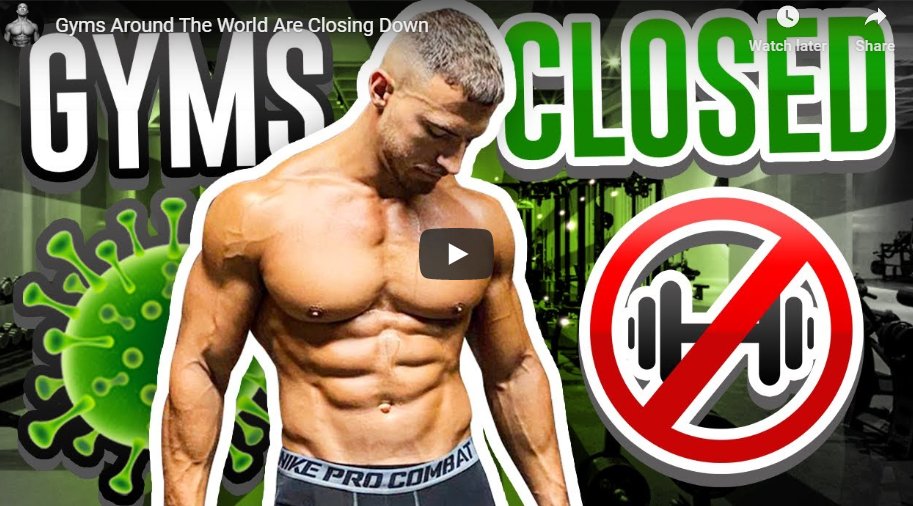 I received an email that I found extremely interesting. The email was from Nick Rizzo over at RunRepeat. They just published a Study that looked at nearly 11,000 gym members and how staying at home and this pandemic has changed their behaviors and lifestyles when it comes to health, fitness, and whether or not once gyms open back up if they will return.

Home Workouts Are the Craze

Right now, avid gym members are going stir-crazy being locked up in their homes. With that being said, many are finding creative ways to fit in their workouts at home – whether that be inside or outside (obviously implementing social distancing to appease the almighty powers that be).

If you do a search online for home workouts, you’ll see anyone and everyone posting their at-home workouts. Celebrities, personal trainers, coaches, athletes, even Instagram wanna-be influencers in the health and fitness space.

Scroll through your social media feeds and you’ll probably see some makeshift workout equipment as well as people doing bodyweight exercises. Heck, maybe people got in before everything was sold out and purchased their own home gym equipment and turned their garage or basement into a gym?

Regardless, current gym members are making it work even while their local gym is closed. This raised the question of whether or not once things go back to normal (whatever that will look like), will these gym members go back to their gym or will they cancel their membership and continue doing their workouts from home? That’s exactly what RunRepeat looked at when they ran this study.

Of the nearly 11,000 gym members who were questioned from 116 different countries, 46.67% said they would not return to the gym when it reopens. Those specifically from the United States said that 50.16% of gym members will not go back to the gym and continue their membership. Surprisingly, yet maybe not too surprising, is that the US was the country with the most gym members surveyed who said they would not be going back to the gym. Does this show a lack of commitment from Americans to focus on their health? Maybe?

The study also found that of those surveyed, more than a third (36.57%) of them have already canceled their membership or are considering doing so soon. Looking at the data between genders, they found that women were actually less likely to go back to the gym (52.25%). This surprised me as I figured the scale would be tipped in favor of men mentioning they’ll not be returning to their local gym.

RunRepeat found that the UK had the highest amount of gym memberships already canceled with 18.92% and Australia was the highest for current gym members saying they will be canceling their membership or who already have at 41.15%.

Let’s stay on this finding for just a second. Can you imagine being a gym owner in Georgia and knowing that over 70% of gym members in the state will not be continuing with their membership? You can’t help but wonder how many more gyms will be going out of business. The gym business is hard enough to keep afloat, and now with the pandemic causing people to rethink their gym membership, it’s no longer the competition that can put you out of business, it’s your actual members.

Could This Be the Death of Many Gyms?

We’ve already seen Gold’s Gym come out and mention they are closing several gyms and have also filed for Chapter 11 bankruptcy. Many would be shocked to hear that, but in an interview Dave Palumbo did with the former owner of Gold’s Gym, Ed Connors, Ed mentioned that the Gold’s Gym locations have been mismanaged for years and that it truly is not a surprise they are doing as poorly as they are. Personally, I think regardless of if the pandemic was a factor or not, Gold’s Gym would still be going down the same path due to the way they are running the business. I look at it no differently than I do GNC and the struggles they have been having.

All that being said, when you have a large chain such as Gold’s Gym feeling the pressure to close their doors, one can only imagine the pain and suffering going on by the smaller mom and pop gyms. Their gym members could quickly put them out of business if they cancel memberships, not to mention those locations are generally more expensive per month when compared to gyms like Planet Fitness, Retro Fitness, and even Gold’s Gym who are anywhere between $10-$20 per month.

It pains me to say this, but I feel that we are going to see gym doors never open back up for many across the nation even when the “ok” is given to do so safely. What worries me, even more, is the toll it is going to take on the American people and their health. With gym members saying they’re canceling their memberships left and right, will they stay committed to exercising at home? Honestly, I don’t see it happening.

Once things open back up and people get back to work, they will go back to their normal busy lives, juggling a million things, and their fitness and workouts will be put on the backburner. This could cause their health to deteriorate, weight to increase, and a greater chance of illness and disease to creep in. At least if they kept their gym membership, they could guilt themselves into going back to the gym since they see the gym hitting their bank account or credit card every month.

What are you thinking about doing? Those of you who are gym members, will you go back to the gym or will you stick to your home workouts or pick up some home gym equipment? Let us know down in the comments.