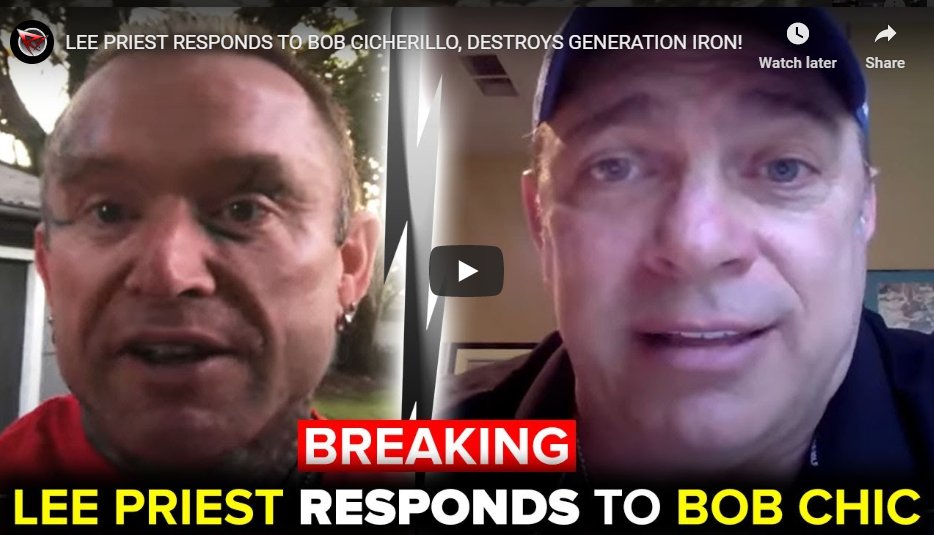 To put things into perspective, there’s been a lot of feuds as of late, probably a product of the sheer boredom brought upon by the COVID 19 pandemic, the fact contests have been either cancelled or postponed, and the general direction that the fitness media has taken. Whether it’s one man acts on youtube or it’s bodybuilding networks, there’s an undeniable segment of the press that sees great value in fake news, clickbait, and stirring up drama.

It’s a day and age when everyone wants to be an influencer and there’s no faster track to hitting big numbers, than putting out content that angers, offends, and/or alienates huge amounts of people. We’ve also seen old rivals and old rivalries come back to life, which tends to happen sporadically over time. One of those long-running rivalries is between 2006 Masters Mr. World Bob Cicherillo and former IFBB Pro Lee Priest. Shots were fired on a recent Generation Iron interview with Cicherillo, in which the Athletes Rep had some blockbuster insights that totally exposed the outspoken Priest, as little more than a big talker and a bullshitter. To date, I have never understood Priest’s fight with the IFBB and/or why he opted to take his great physique to second tier, watered-down federations and simply become more and more obscure. In the end, what did he actually accomplish?

The latest flareup of this long-running feud took place when Bob dropped the gauntlet at GI. In that video, he was asked about the days when he tried to form a union. As Bob began to offer a somewhat thorough, albeit concise, explanation of the early stages of that process, he made reference to Lee’s noticeable absence. It was at this point that Bob further highlighted that Priest, someone known throughout the industry as being a rebel, was nowhere to be found during this, arguably, pivotal moment in bodybuilding history. He also pointed out that this process took place at the height of Lee’s popularity and that had he been involved, it may have made a difference.

Oftentimes, the dogs that bark the loudest, in fact, don’t bite.

Lee has worked very hard over the course of the last 15 years, to create an image of a fast-talking, unfiltered, totally zealous rebel. He has been suspended multiple times, competed in second and third-tier federations, and given, some would say, ridiculous interviews, all working towards creating a persona. The irony that he was absent from the most important meetings that could have given the athletes more of a voice, creates substantial doubt in everything Priest allegedly stood for. Quite frankly, it makes him look like a hypocrite and/or a coward. That being said, Bob didn’t serve up any digs, disses, or knocks – he just stated facts: a key meeting took place and Lee Priest wasn’t there. The bottom line is – THE TRUTH HURTS.

Further to the issue of collateral damage, is the fact that Lee did not make his rebuttal on his own page. Instead, he made the rebuttal video at RXMuscle. Once being dragged into the feud, Generation Iron fired back, with a highly-controversial video featuring Lee’s mom. I will have an article all about that soon, but it shows how this feud has escalated to the point that it’s only going to get worse. There’s also long-running beef between Cicherillo and Palumbo, which may also break off, should things really go south. Fortunately, both Priest and Palumbo are smart enough not to strike – either directly or collaterally – at King Kamali (GI’s #1 star). Then again, I wouldn’t rule anything out.

Moreover, on one of Lee’s rebuttals, he makes a personal attack against one of the main owners of GI, suggesting that the two can resolve their differences if they do it on RX Muscle. This has been the site’s marketing angle for ages. While they may want to fix things, they want to fix things on their platform. This is critical because what it shows, is an all out attempt to gain hits, buzz, and of course subscriptions. It’s a well-established fact that some individuals and some websites have mastered the art of creating and/or being at the center of controversy, as a vehicle to maintaining social relevance in the fitness industry. While the initial interview that caused this flareup may have been at GI, there is a concerted effort to bring the controversy to RX, host all the bickering there, and ultimately resolve it – there.

Unfortunately, fans all around the world find themselves torn because of this drama on social media. Bob has tens of thousands, if not hundreds of thousands, of loyal fans all around the world. Lee has dozens of fans in his hometown of Newcastle, Australia and quite possibly, even, hundreds of folks internationally. Oftentimes, the fans will take feuds, such as this one, to whole new levels, battling it out on the message boards and social media networks like Facebook, Instagram, and even Tiktok.

It’s sad though, because during these difficult times, the fans should have fun and enjoy talking about the great direction the sport is going in. We have a terrific Mr. Olympia in Brandon Curry, an amazing group of Top 6 bodybuilders, and tons of free content on home workouts and nutrition. That being said, here we are, talking about a feud that goes back fifteen years.

One point I would like to make in closing, is this. There are some unfounded beliefs that Bob hates Lee and/or that he has gone out of his way to interfere with Priest’s career. Let me just point out how silly both notions are. As Athletes Rep, Bob actually tried to help Lee get back to the IFBB, I’m sure he’s offered him advice, and I’ve never heard or read of him knocking the guy’s physique. If anything, Cicherillo is a fan of it. The truth of the matter is that, for whatever reason, Lee threw a very promising bodybuilding career away. He may say he was a rebel and that he wanted to fight, but Bob told it like it was, with facts, and that’s the loudest mic drop of them all. There’s nothing Lee can say or do, now, that will change what he did – or – did not do, some 17 years ago.