THE RETURN OF PHIL HEATH 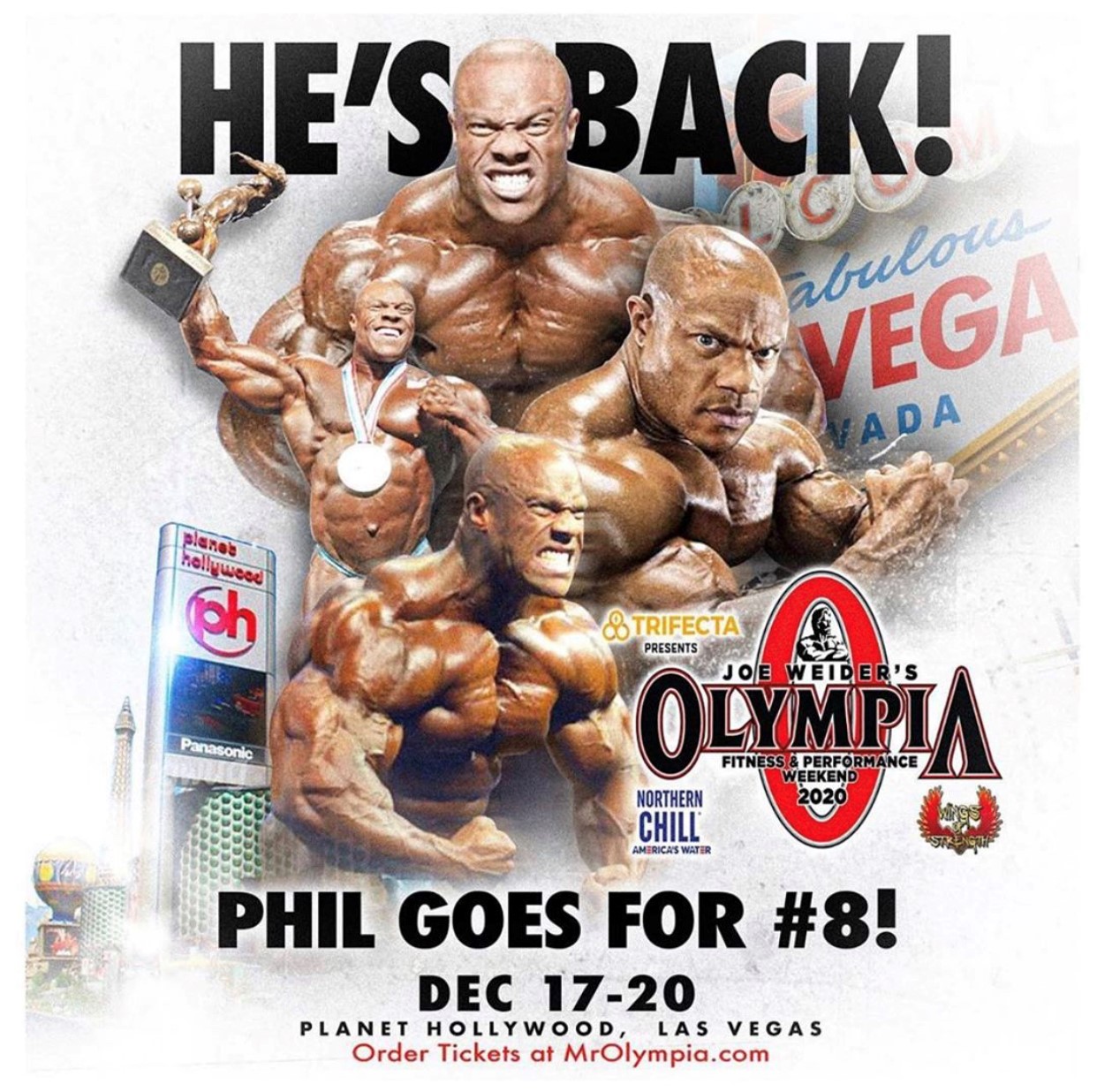 He’s back!! The world of bodybuilding and fitness was inundated with posts hailing the return of 7x Mr. Olympia Phil “The Gift” Heath, who is said to be going for his 8th Sandow this December at the 2020 Mr. Olympia. Chief Olympia Officer Dan Solomon has said all year long to expect big things and like Dominos Pizza, he delivered. The truth is, this is great news for the fans because the most iconic contest in bodybuilding has a new host hotel and a new venue, and it will welcome the return of one of its former champions.

It’s been two long years since Heath has been absent from the sport. After getting his ass handed to him by Mr. Olympia Shawn “Flexatron” Rhoden in 2018 and sitting out the 2019 Olympia that Brandon Curry won, many thought Phil would remain retired, indefinitely. Unlike his biggest rival Kai Greene, Phil doesn’t have a film career, he doesn’t write books, and he doesn’t own a supplement company – hell, he doesn’t even have a supplement contract. The truth is, I don’t know what Phil did this whole while. I saw some content of him speaking at a mortgage convention, his t-shirt company seems to do well, and he does a good amount of internet interviews. Then again, how many shirts can Phil make, fold, and mail, before he seriously thought about returning to the stage and making some real money??

Guys like Phil really only have bodybuilding. Guys like Lou Ferrigno, Kai Greene, and Kevin Levrone left the sport to pursue other ventures. Kai’s been gone for half a decade, Kevin didn’t come back for well over a decade, and for Lou Ferrigno it was nearly twenty years before he returned. The reality with Phil, however, is he got a lot of gifts when he was on top. There were at least one or two years he could have lost the title to Kai Greene and in 2016 he nearly lost the title to Shawn Rhoden. I say nearly because in my opinion he lost, but the judges saw otherwise. When you’re Mr. Olympia, it’s often said you have to be knocked out, so I’m hoping even in a close battle, Brandon should enjoy that same mythical edge, though he won’t need it. Phil is coming back as just any other competitor, the guys who never left aren’t likely to fade merely because he’ll step on stage, and if he doesn’t win, what then?

Initially I had heard rumors of all sorts of big sums of money Phil was demanding to come back. When I interviewed Dan Solomon for StrengthAddicts, I was assured that (A) Phil didn’t ask for anything, and (B) no athletes in Dan’s time as COO had ever asked either. That’s good to know, especially considering the fact that the The Olympia is the biggest purse in bodybuilding and if anyone wants to win the biggest cash prize, they should earn the title. Every person who steps foot on the most important stage in bodybuilding has earned their place, either by points, winning an IFBB Pro League contest, or being a past Mr. Olympia. Every Olympian is a champion in his right and that of course includes a multi-year champion like Heath. The problem for Phil, however, will be that he won’t dominate the contest – nor should he. I really hope that Dan and his team don’t make that blunder. The main star isn’t Heath, it’s Curry, and Heath shouldn’t overshadow guys who have been fighting in the trenches, nor guys like James “Flex” Lewis who will be making their debut in Open Bodybuilding and/or Arnold Classic champion William “The Conqueror” Bonac.

It would be highly disrespectful if Heath became the main focus of the advertising and promotion of the 2020 Olympia. I don’t put it past the fitness press to fall prey to letting the hype get the best of them, but the official promotions should reflect the current pecking order. Heath should definitely get some exposure, but he should be a guy in the far wings, not dead center. We’ve seen this happen before and it never looks right; hopefully this time it’s different. Let’s not forget 2009, when then reigning Mr. Olympia Dexter “The Blade” Jackson got nearly ignored when it became clear Jay Cutler was returning to compete at that year’s Olympia.

Further, a lot has changed since Phil left the sport. To say bodybuilding hasn’t changed, would be highly inaccurate. Dexter Jackson is supposed to retire, Roelly Winklaar has had more than a full year to stage a strong title challenge, and rising stars like Steve Kuclo continue to get closer to the top spots. Other veteran competitors like Maxx Charles, Akim Williams, and Lionel Beyeke are also moving up. While it’s still unknown if Iran’s Hadi Choopan will be able to get a visa, his physique in 2019 was also quite stellar. If you put guys like Curry, Lewis, Choopan, Bonac and Kuclo all at 100%, where does that leave Phil?

Here is why I felt like I had #UnfinishedBusiness and announced my return to @MrOlympiaLLC. If you guys are facing big pivots in your lives, careers, or relationships right now, I really encourage you to break everything down, and go after understanding the “why” before you build back up or head in a new direction. Remember that when committing to self exploration, you will be forced to exhibit such vulnerability that you may feel uncomfortable, just like a dreaded leg day perhaps haha. What’s great about discomfort is that you have now opened your mind, body and spirit to push through boundaries, dropping off dead weight so you can achieve your goals. I have applied this in my life and it has allowed me a new path in creating what I hope are triumphant moments on and off the stage. We’re doing this together, let’s go…

The concept that Health is unstoppable was largely part and parcel of the myth created around his fictitious dominance. We saw dominance with Lee Haney, we saw it with Ronnie Coleman, but we never really saw with Heath. There were years he was the clear-cut best, there were other years where it was close, and there were at least two years where he won by the skin of his teeth.

Phil can run whatever narrative he wants now, from raising doubts in the judges to throwing shade to the leadership, but in 2018 he got his ass handed to him and I have to say, he probably made it clear after the contest and even early in 2019 that he had no interest in coming back. It could be that he needed time for his surgery and rehab – or – it could also mean that he didn’t want any part of Shawn Rhoden. Heath has also been very disrespectful of Brandon’s reign, whether directly or through proxies, so the fact is, maybe he sees Curry as easy competition. I certainly hope that’s not the case, at least for his sake, because Brandon will be ready – more than ready – he’s seen Phil coming from a mile away. The media might be as surprised as the fans, but guys like Curry knew this day was coming. And not only did they know about it, they anticipated it.

Sometimes a toppled champion needs to get a wakeup call. Ronnie needed his in 2007, Jay got his in 2013, and maybe Phil will get one in four months. Just like Kai told Phil in 2014 “that was then and this is now.” In addition to not getting the edge that saved him so many times, he was also never a popular champion, so he’ll definitely be hearing quite a few boos when he poses and tries to work the audience.

With that being said, what happens if Phil doesn’t win? What happens if he takes 4th like Ronnie or 6th like Jay? Does he then become the Dexter Jackson of the next era, spending a decade chasing a title he won’t win again? Dexter has been a fixture in the Top 6, which is a great place to be. If that’s something Phil would be happy with, as well as winning the occasional Arnold Classic and winning Athleticon (if and when it ever happens), then that might be a nice path for him to follow.

That being said, if he fails to win, he may also call it quits for good and never compete again. The only problem there is, Phil may not have anything else going for him. Yes, we all know he’s college educated and we all know how famous he is (according to him), but he hasn’t really done anything. In fact, I just realized he actually has a supplement company in Phil Heath Labs, but to be honest I haven’t really seen it anywhere. The company is obscure, I just remembered it almost at the end of writing this article, I don’t know a soul who uses it and I’ve never seen it sold at any store I frequent. Again, I’m not looking to throw shade at Phil, I’m just writing this article from a totally unfiltered perspective.

Phil’s return definitely adds a twist to things, but how much of one, only time will tell. Do you think it’s 100% definite he’ll compete? Has he actually signed and submitted a contract or could he still back out? If he does do the contest, will he back up all the hype and bring his best physique to date? Will he be able to bypass all the great competitors, bypass Flex Lewis, and be the last man standing with Brandon in the Top 2? I say no way. I say the Top 2 will be Brandon and Flex, with several top guys in the Top 6 that do no include Phil. If The Gift breaks into the Top 6, though, I honestly don’t see him placing much higher than 6th or 5th.